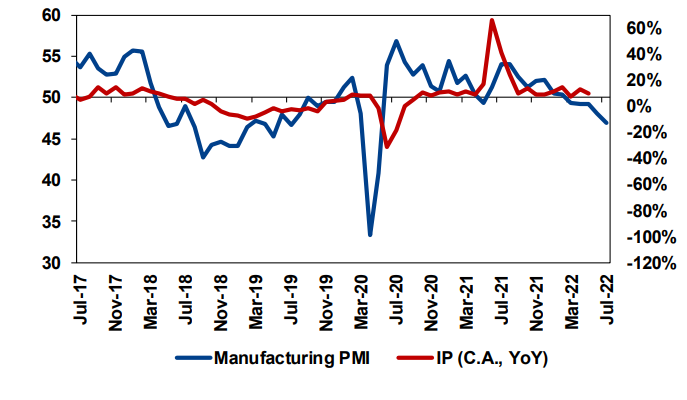 Manufacturing PMI hit the lowest level of last 26 months (since May 2020) and remained at the contractionary area for the 5th month in a row.

Manufacturing PMI decreased to 46.9 in July from 48.1 in June. There was no consensus available for the data. Main driver of the slowdown was weak demand while ongoing uncertainties and price pressures increase the negative impact:

Amongst 10 sectors covered in the context of the manufacturing PMI, only land & sea vehicles PMI was above of the critical value of 50 in July. The lowest levels of PMI were seen on textiles, non-metallic mineral products and basic metals sectors.

Manufacturing PMI indicate that the YoY IP could lose momentum and decrease to negative levels.

Contrary to the slowdown in manufacturing  PMI, Services PUMAX (MUSIAD-SAMEKS services PMI) continues to give a robust Outlook, with the composite index rising by 2.2 points MoM.

According to private think tank Betam:

In the light of fully-released April, May, and partly-released June leading indicators, we expect GDP to expand by 5.7 percent on a year-on year basis for the second quarter of 2022. According to seasonal and calendar-adjusted data, we forecast quarter-on-quarter GDP growth to be 1.1 percent.

The World Bank and OECD had increased their growth forecast for the Turkish economy in 2022 to 2.3 percent and 3.7 percent, respectively. The IMF has recently increased it to 4 percent from 2.7 percent.

3Q2022 performance is expected to be  robust thanks to mid-year fiscal stimulus and the best tourism season since 2019.  On the other hand, weakness in private expenditures and ill-advised intervention in the loan-making mechanism causing a visible slowdown in total loan volume pose risks to the outlook.

4Q2022 promises to serve as a severe test to Erdogan’s capacity to steer the economy clear off a recession.