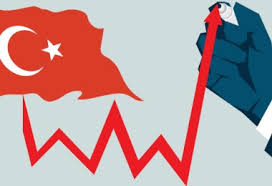 State Statistic Office (Turkstat) announced Turkey’s consumer price inflation accelerating 19.58% in September from 19.25% in August amidst the 1.25% mom hike. The 12 month CPI inflation corresponds to the highest level since March 2019.

The unofficial ENAGrup (an independent organization formed bu scholars) announced September CPI inflation at 2.89% that brings the yoy level to 44.7%.

Producers’ price inflation (D-PPI) at 1.55% in September pulled down the yoy D-PPI to 43.96% from 45.5% in September.  The ease owes to rather stable TL during the summer months as Fed was at the sidelines and Turkey was having a better tourism season along with strong export performance.  yeti the September rate cut paved the way for further TL weakness hence the D-PPI inflation is soon to be fueled again.

The Turkish central bank last month had unexpectedly cut interest rates to 18 percent from 19 percent , saying it had switched its focus from CPI to more stable core inflation when setting monetary policy. As of September the Core – C inflation also surged to 16.98% from 16.76% in August leaving no room for the central bank to continue with monetray easing.   Central bank Governor Kavcioglu, appointed in March, is under pressure from President Erdogan to lower borrowing costs even after inflation spiked as Turkey’s growth is slowing and the country is heading to elections in 2023; perhaps to early elections in mid-2022.

The lira was trading down 0.2 percent to 8.8732 per dollar after the data was published, off a record low reached last week of 8.96 per dollar sparked by the Sept. 23 rate cut.

Rate cuts to continue or not?

The central bank next meets on interest rates on Oct. 21.  The surge in inflation does not justify further rate cuts. Yet the government now supports export based growth and highlights how a “competitive currency” will aid in lowering inflation in the long term through narrower current account deficit.

Lowering Turkey’s now structural inflation from 20% plateau (as per the official figures) and from 50% plateau (according to unofficial data) would take a serious combat against inflation and a rational monetray policy which are not the case with the Erdogan administration.