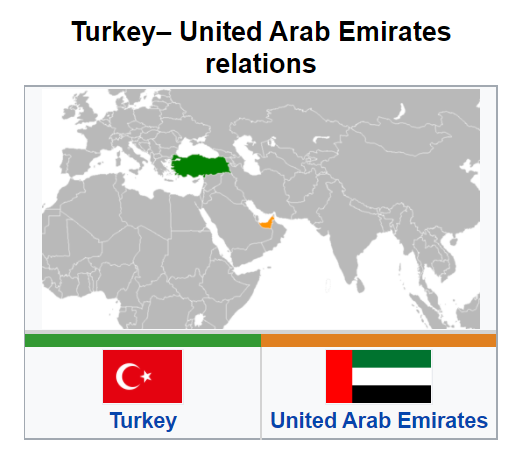 The efforts to repair ties between Turkey and Gulf Monarchies is the most important manifestation of Turkey staging a U-turn from her confrontational approach to neighbors and diplomatic partners.

Turkey has also reached out to Armenia.  Turkish political pundit Murat Yetkin claims developments show that Erdogan is preparing for a series of new maneuvers, U-turns, to overcome the successive setbacks.  The journalist points to no  new refugees policy as another example of the U-turn.

Turkey and the UAE have competed for regional influence since the Arab uprisings erupted a decade ago, a rivalry which saw them backing different sides in Libya’s civil war and extended to disputes from the eastern Mediterranean to the Gulf.

Erdogan said last year Turkey was considering breaking off diplomatic relations after the Gulf state’s accord to normalize ties with Israel.

“Relations between the countries and regional issues were discussed in the talks,” Erdogan’s office said of his call with Sheikh Mohammed.

The call came two weeks after Erdogan met a senior UAE official and said the two countries had made progress in improving relations which could lead to significant UAE investment in Turkey.

“It is in everyone’s interest to pursue an agreement-based policy instead of a conflict-based policy. Because the latter has costs. This is an important development,” a senior Turkish official said of the latest talks.

Ankara and Abu Dhabi have backed rival groups in the Middle East for years, with Turkey supporting Islamist movements, especially the Muslim Brotherhood which took part in the Arab Spring uprisings in a bid to overthrow autocrats in the region. Wealthy Gulf leaders worry such unrest would reach home.

The UAE’s state news agency WAM said both leaders discussed “the prospects of reinforcing relations between the two nations in a way that serves their common interests and their two peoples.”

Turkey last year accused the UAE of bringing chaos to the Middle East through interventions in Libya and Yemen, while the UAE and several other countries criticized Turkey’s military actions.

Ankara has also made overtures this year towards the UAE’s main regional allies, Egypt and Saudi Arabia, aimed at overcoming tensions that have impacted Turkey’s economy.

Turkey’s tense ties with Saudi Arabia collapsed after the 2018 killing by Saudi agents of journalist Jamal Khashoggi in the Saudi consulate in Istanbul.

Relations with Egypt have been strained since the military overthrew Egypt’s first democratically elected president, Mohamed Mursi of the Muslim Brotherhood. Erdogan, whose ruling AK Party is rooted in political Islam, had been a strong supporter of Mursi.

The two countries said on Tuesday they would hold a second round of talk next week. The Turkish official said it was unrealistic to expect to solve long-term problems in a short period of time.

“But there is a will to solve them. The issues will not worsen, in the short- and medium-term relations will get better.”

Erdogan may need yet another U-turn to broaden the AKP grassroots as election time approaches.

Erdogan is looking for ways to include the voters who “pulled to the side of the road” back to his motorcade, according to Bekir Agirdir, the general manager of research company KONDA. This means luring back the AKP voters who have distanced themselves from the party but are not convinced about any other party. Political scientist Seda Demiralp has recently analyzed the reasons why voters who “pull their car and wait” do not join the opposition even though they are alienated from the AKP.

In the last ten years, Erdogan has lost a few voter blocks after reaching 50 percent of the vote support in the 2011 elections. I am saying this while also keeping in mind that problems such as poverty, high cost of living, unemployment, and the recent deterioration of reputation due to floods and forest fires.

Although it is difficult to prove at the moment, it is not a coincidence that claims over attempts to contact Fethullah Gülen and claims of winning some groups that broke away from FETÖ, the Gulenists, emerged during this period. Likewise, the allegations that the former President Abdullah Gül was contacted through Defense Minister Akar, his friend from the high school. These allegations revive the hopes of “We can be together again” in the AKP sphere of influence.

In any case, it shows that Erdogan needs a serious political U-turn before the elections to be held in June 2023 at the latest. But too many turns on the fast lane introduce more risks.