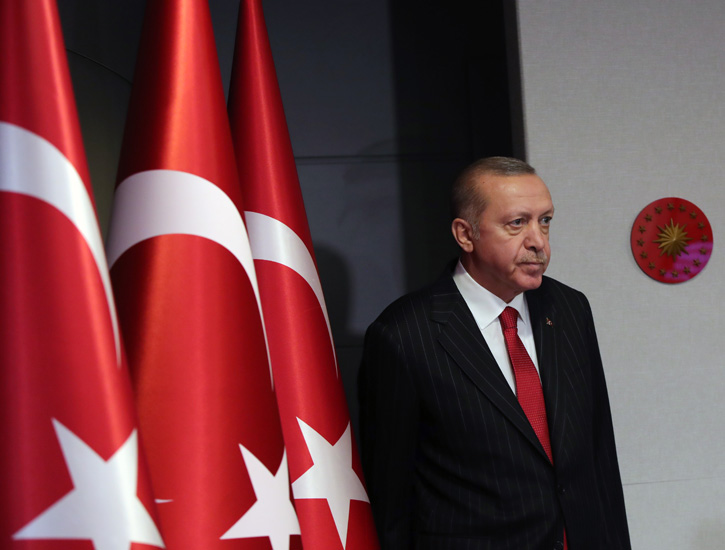 “Now it is time to work harder, produce more, speed up,” he told AKP delegates. “I want my citizens to invest foreign currency and gold kept at home, which is our national wealth, in various financial instruments to benefit our economy.”

This was no idle request. A few days prior, Mr Erdogan had for the third time in 20 months fired his central bank chief. The dismissal of Naci Agbal, who had raised interest rates two days earlier, in an effort to curb persistently high inflation, shocked analysts and investors who had seen his four-month tenure as restoring credibility.

He was replaced by Sahap Kavcioglu, a pro-government columnist and former banker and AKP parliamentarian, who is said to share Mr Erdogan’s unorthodox view on inflation and interest rates. When markets opened Monday the Turkish lira quickly lost 15 per cent of its value, falling near record lows against the US dollar before regaining some ground.

Since a mid-2018 currency crisis, the lira has lost nearly half its value against the dollar and Turks have become increasingly reluctant to watch their savings evaporate. The President urged his worried countrymen to invest in Turkish instruments, highlighting the benefits of Islamic ones in particular, but many have other ideas.

Turks’ total investment in gold is equal to about 40 per cent of gross domestic product, according to Bloomberg, while dollar- and euro-denominated savings are also sizeable. Recently a fourth alternative has emerged. The cryptocurrency market remains unregulated in Turkey, with no tax laws or licensing requirements for traders.

This, plus the falling lira and bitcoin’s five-fold leap in value in recent months, has driven sharp Turkish interest. As of early 2021, Turkey’s two main crypto exchanges, Paribu and BtcTurk, averaged more than $1 billion in daily trading.

A February survey by the German consumer research firm Statista ranked Turkey fourth globally in terms of crypto ownership, at 16 per cent of the population. A 30-year-old Turkish crypto investor says the digital currency has come to mean two things to Turkish youth: “future and freedom”.

Turkey’s central bank is unlikely to start regulating the crypto space anytime soon, as its plate is full trying to calm market jitters. It is too soon to predict the extent to which Turkish interest in crypto currencies might shape markets, but it could be an increasingly appealing alternative if the lira remains weak and economic despair deepens.

To read the full article: https://www.thenationalnews.com/opinion/comment/turkey-s-economic-mess-is-no-divine-test-it-is-a-policy-failure-1.1192620