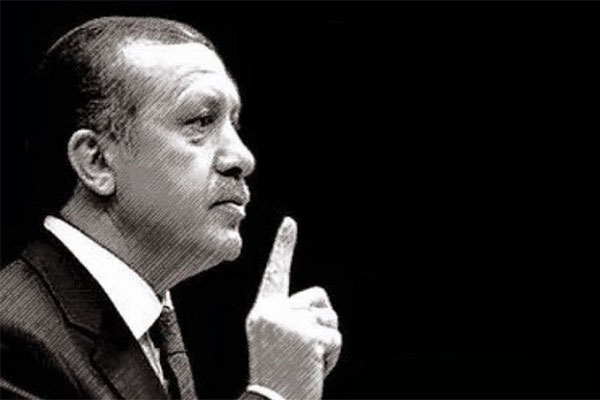 Central banks around the globe are currently staring at inflation rates unseen in more than 20 years.

Supply chain problems and labor shortages arising from the pandemic, combined with sharply rising food and energy prices, have pushed prices up by as much as 6.2% in the US, 4.2% in the UK, 10.7% in Brazil and 4.5% in India. Every central bank has responded by either raising interest rates or committing to raising them in the immediate future.

It’s too early to say whether the new coronavirus variant B.1.1.529, first identified in Botswana and now known as omicron, will take rate-rises off the agenda, but certainly they have not been part of Turkey’s plans. Since September, Turkey has cut interest rates by four percentage points from 19% to 15%, wreaking havoc in the financial markets in the process.

The Turkish lira, which was trading at US$8.28 (£6.21) in early September, fell to $13.40 a few days ago, its lowest level on record at the end of an eleven-day losing streak. It is now trading at around $12.10, having recovered a little but then weakened again as investors move money out of weaker currencies in response to new fears about Covid.

So why has Turkey had such an “irrational” policy stance on interest rates while everyone else is doing the opposite?

It would have been of some academic interest to analyze the reasoning behind such a move, but there has been little forthcoming from the authorities – except to say that it would “boost exports, investment and jobs.”

President Erdogan believes that raising interest rates would raise inflation rather than reduce it and has maintained this view throughout the near 20 years that he has been prime minister (2003-14) and president (2014 to present).

Unlike the 2018 currency crisis, which followed a diplomatic crisis between Turkey and US, the latest debacle is very much homemade and self-inflicted.

Turkish lira vs US dollar 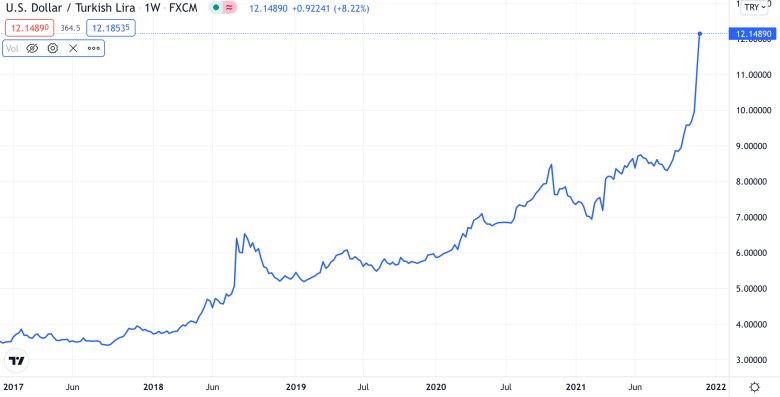 There have been two important changes in governance in recent years with important consequences. First, the move to the current executive presidential regime in 2018 officially crowned the president as the dominant authority in every sphere of policy.

Second, the independence of the country’s central bank, granted as part of a series of economic reforms in the early 2000s before Erdogan’s AKP came to power, is now also gone.

There have been four central bank governors in less than three years, with a clear pattern of dismissals closely following interest rate hikes. The most recent appointment was Şahap Kavcıoğlu in March, and interest rates have not risen since then.

The lira has now lost nearly 40% of its value since the beginning of the year. This is a massive depreciation for any economy, and even worse for Turkey for various reasons.

For one thing, the fall in the lira will soon show up in a rise in inflation, which is already hovering around 20% even by official accounts. The fact that so much of the economy runs on US dollars does not help.

Existing estimates suggest that a 10% depreciation in the lira against the US dollar results in around a two percentage point rise in inflation. Given that inflation has only risen by about one percentage point since the summer, that suggests it has a long way to go yet.

About 70% of Turkey’s imports are made up of raw materials and goods used in manufacturing, so that’s where much of the effects will be felt. Among the difficulties is that Turkey has to import most of its energy.

Another issue is that a significant proportion of Turkey’s debts are in foreign currencies – mainly US dollars and euros. The weaker lira makes these debts much more difficult to service, and Turkey is due to pay $168 billion of its external debts in the next 12 months.

The increased risk of default could inflict serious losses on foreign investors, with certain Spanish and Italian banks among those that are heavily exposed. This raises the prospect of Turkey’s problems spilling over into other countries, and the sell-off in the lira is likely to get worse if market panic becomes prolonged because of variant B.1.1.529.

What can policymakers do?

Apart from the fact that the regime in Turkey is not enthusiastic about raising interest rates, it can’t sell foreign reserves because it essentially doesn’t have any. That leaves capital controls, which would be an extreme measure in today’s world and would imply that Turkey was withdrawing from the international financial system.

Capital controls are also difficult and costly to enforce, even in countries with robust institutions.

Perhaps instead the central bank will reverse policy and raise interest rates. This already happened during the 2018 currency crisis, when the authorities made a major U-turn and raised interest rates by 6.25 percentage points that September.

At that time the lira had plummeted to close to $6.50 – still much more valuable than it is today – before strengthening to the low $5.00s after the change of policy. Similarly, in 2020 a rate-cutting streak was followed by sharp rate-rises later in the year.

Yet, as necessary as it is for Turkey to increase interest rates, this will not do much to solve the significant imbalances in the economy that have accumulated over a long period.

What Turkey needs is a carefully designed and inclusive stabilization program with buy-in from large sections of society, with independence for the central bank at its core. This is highly unlikely to happen with the current all-powerful presidential regime, with or without a change in power.

Here is the original article.