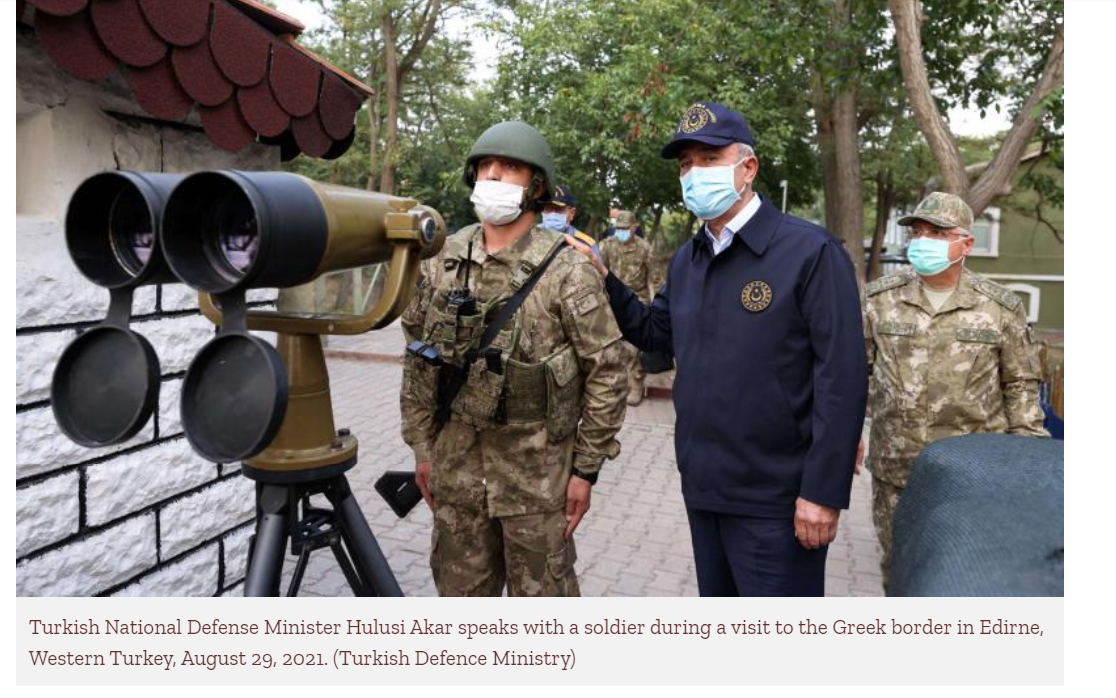 Turkey’s defense minister reiterated on Thursday that his country will never accept any Greek move to extend its territorial waters in the Aegean sea, dismissing any possible effort by Athens as “empty dreams”, reports The Arab Weekly.

Speaking at a symposium in Istanbul addressing Turkey’s troubled ties with Greece, Defense Minister Hulusi Akar also said Turkey was determined to press ahead with efforts to search for energy in the eastern Mediterranean in areas where its believes Ankara and Turkish Cypriots have rights.

Neighbors and fellow NATO members Greece and Turkey have long been at odds over a series of disputes, including territorial rights in the Aegean Sea and over energy exploration rights in the eastern Mediterranean. Tensions flared last year over exploratory drilling rights in areas in the Mediterranean where Greece and Cyprus claim as their own exclusive economic zone.

Greece also says it maintains its right to extend its territorial waters from the current six to 12 nautical miles around its Aegean islands. Turkey has long said it would consider the move — which would block its own access to the Aegean — as a cause for war. In January, Greek parliament voted to extend its waters along its western coastline, on the other side of the country, to 12 miles.

“While we do not accept this claim which disregards the rules of international law, the principles of reason and logic, Greece seeks to expands its airspace further with the dream of extending its territorial waters to 12 miles,” Akar said. “It should be seen and known that these are empty dreams.”

“We will continue our activities in areas where (Turkish Cypriots) have given us license and where we have rights,” Akar said. Cyprus has been divided between its Greek and Turkish communities since 1974. The internationally-recognized Greek Cypriot government accuses Turkey of violating its maritime economic zone by drilling off the island.

Meanwhile, in a pre-recorded video address to the symposium, President Recep Tayyip Erdogan said his country has been left on its own to deal with millions of Syrian refugees and accused neighboring Greece of “wasting a historic opportunity” to cooperate with Ankara on the issue of refugees.

“No step has been taken to ensure that refugees can live in security and peace in their own lands,” Erdogan said. “Turkey was left alone in its extraordinary struggle to prevent irregular migration,” Erdogan said.

Turkey hosts more than 3.6 million Syrians who have fled the civil war in Syria and the migration issue has led to flare-ups in tensions between Greece and Turkey.

In 2016, Turkey and the EU signed a deal for Turkey to stop the hundreds of thousands of migrants and refugees heading toward Europe, in return for visa-free travel for Turkish citizens and substantial EU financial support.

Erdogan has frequently accused the EU of not keeping its side of the bargain, while the deal led to thousands of asylum-seekers languishing in squalid refugee camps on the eastern Greek islands.

Ankara’s new outburst against Greece stems from two “provocations”  by Greek Cypriote Administration. First, the government ordered pages about Ataturk to be exclude from middle-school curriculum, which Turkey perceived as national slight. Secondly, Cyprus said  it would revoke passports issued to Turkish Cypriot officials in the breakaway north of the island over their “hostile” actions.

Government spokesman Marios Pelekanos did not specify which officials were being targeted, but said the decision was linked to Turkish and Turkish Cypriot plans to open up the ghost town of Varosha.

“The cabinet decided to revoke, not renew or issue Republic of Cyprus passports to a number of persons who either participate in the pseudo-state’s cabinet or are members of the Varosha opening committee,” Pelekanos said Monday.