Turkey market ructions have claimed the nation’s currency and bonds among their victims, but stocks are defying all odds to post one of the world’s best performances this month.

The benchmark Borsa Istanbul 100 Index has rallied more than 7% in October, the sixth biggest advance globally in local-currency terms. The gains have come despite a surge in inflation to about 20%, a foreign exodus from the lira, sovereign yields at 2019 highs, and a diplomatic spat that threatened to deepen tensions between Turkey and the West.

The equity gains vanish when converted into dollars as the lira plumbs new lows, while inflation erodes capital gains. At the same time, the rebound reflects Turkish fundamentals that include a thriving consumer economy and companies that are beating profit expectations.

Turkey’s exporters are reaping the rewards of a weaker lira, sending average local-currency earnings on the Borsa Istanbul 100 Index to the highest level since at least 2004. Analysts are catching up, raising their profit forecasts for the gauge. Compared with current actual earnings, they project a 49% increase by October 2022.

“Exporters and net foreign-exchange earners remain the preferred exposure,” said Sebastian Kahlfeld, a Frankfurt-based money manager at DWS Investment GmbH. “Most large companies also have a very moderate exposure to FX debt, and in many cases, it is also being hedged.” 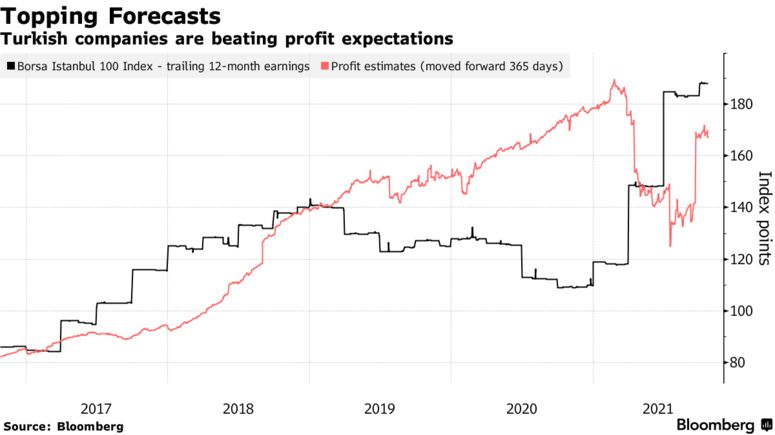 Besides exporters, industrial companies serving the domestic market are also making major contributions to the index. A revival of business activity after pandemic closures, renewed demand and a supply squeeze are all adding to their fortunes.

“Operational profits of companies are quite good, especially exporter industrial companies are in good shape,” said Burak Cetinceker, a money manager at Strateji Portfoy in Istanbul.

Investors withdrew a net $1.3 billion from Turkish equities this year through Oct. 15, according to central-bank data. Foreign ownership fell to record lows of 41%, according to the Central Securities Depository. With such sparse positioning, any small buying can boost markets disproportionately.

“International shareholders have widely left the Turkish equity market, reducing the selling pressure,” said Kahlfeld of DWS. “The remaining investors might have a much longer investment horizon.”

While most foreign investors have departed, local buyers are rushing into the market. To hedge against double-digit inflation, they are increasingly parking their funds in equities.

The Borsa Istanbul gauge trades at 5.3 times projected earnings, a 60% discount to average emerging-market valuations. At this price, some foreign investors are tempted to return.

Despite the rally, Turkey’s stock market remains an underperformer for the year, trailing about 75 other countries.