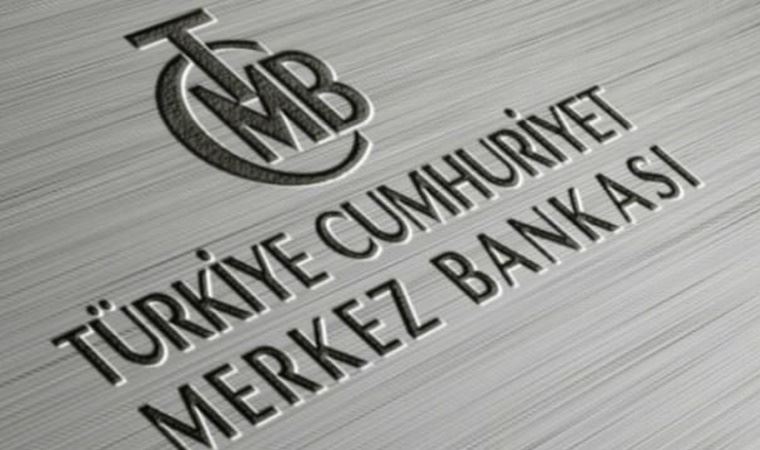 Turkey is pushing commercial lenders to slash interest rates charged on loans to companies after the central bank moved this week to stimulate the economy with a surprise rate cut.

The monetary authority on Saturday released rules that will force banks to bring commercial loan rates closer to Turkey’s benchmark policy rate, in an attempt to counter signs that the $800 billion economy might be slowing.

The regulations follow the central bank’s decision on Thursday to cut its policy rate to 13%, even with inflation running at a 24-year high of 80%. The intended objective is to keep relatively cheaper cash flowing to companies and generate jobs as Turkey gears up for elections in 2023. 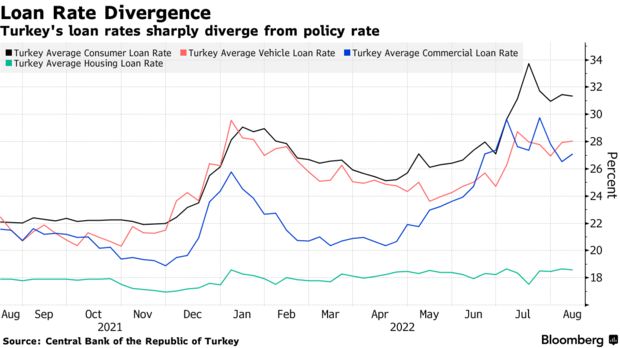 Banks will also need to carry more lira-denominated government bonds to adjust, a requirement that may prompt a rally in Turkish debt markets like the one that followed similar measures in June.

The monetary authority said the regulations will strengthen the so-called transmission mechanism, or its ability to influence the cost of money that banks lend to their customers.

But the bulk of the changes are aimed at lowering the cost of loans for corporate customers. Lenders that charge too much or lend too aggressively will be required to park a larger amount of lira assets at the central bank.

Lenders asking for interest rates of 22.85% to 29.4% on new commercial loans will be required to lock lira bonds worth 20% of new credit at the monetary authority. For even higher interest rates, the ratio rises to 90%.

The new regulations apply to loans that will be extended through the end of the year, and the rates band will remain linked to the official policy rate.

There’s been a sharp divergence between Turkey’s official policy rate and the cost of loans in the banking sector in recent months. Lenders now charge more than double the central bank’s rate, which had been held at 14% since December until Thursday’s cut. 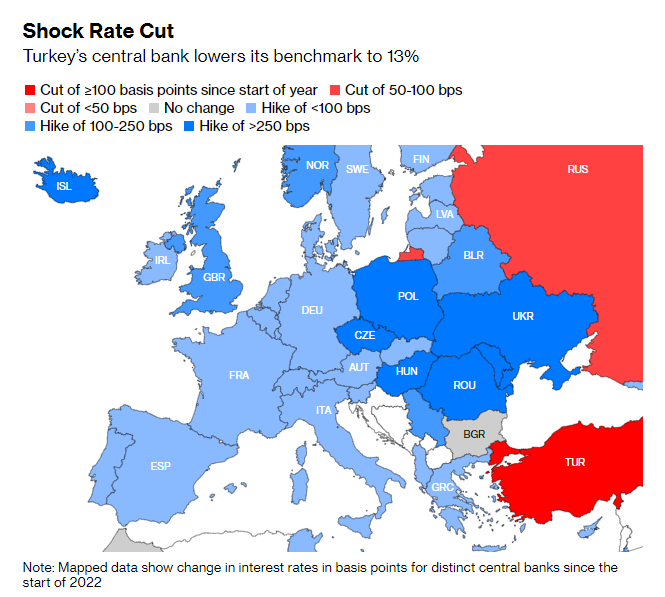 The average rate for commercial loans in liras spiked to 30% in July, the highest in four years. While it’s fallen slightly amid complaints from businesses about a finance crunch, it was still at 27% as of Aug. 12, according to official data.

Boosting the economy through credit is a policy long favored by President Recep Tayyip Erdogan’s administrations. Following an attempted coup in 2016, Turkey’s government introduced the Credit Guarantee Fund, through which companies could access borrowing backed by the state.

The approach eventually backfired as abundant credit caused the economy to overheat and contributed to the lira’s crash in August 2018.

More recently, juiced by the president’s favored ultra-loose monetary policy, Turkey’s economy has blazed ahead as it emerges from the pandemic, and has continued to expand at one of the fastest rates in the Group of 20.

But the central bank this week warned of “some loss of momentum in economic activity” at the start of the third quarter.

The abrupt resumption of monetary easing puts the lira, one of the world’s worst performing currencies this year, at risk. The currency weakened as much as 1% against the US dollar after the rate decision, reaching its lowest since Dec. 20, before paring losses.

Turkey’s policy makers are following through on Erdogan’s determination to lower borrowing costs as much as possible before elections scheduled for June. But price increases are emerging as a major threat to the Turkish leader’s popularity, and the new regulations hardly make a compelling argument that monetary authority sees inflation as its number one priority.

Forcing banks to lend at lower rates accentuates overheating concerns and will not only do nothing to address inflation but will make it worse, said Tim Ash, emerging markets strategist at BlueBay Asset Management.

The central bank this week revised its 2022 inflation forecast higher by almost 18 percentage points and now sees year-end inflation at 60%, 12 times the official target, with a peak of around 85% expected within months.