Turkey is priming a new round of cheap loans for businesses through a government-backed program, according to a person familiar with the matter, promising a fresh dollop of stimulus before next year’s elections to spur growth in an economy at risk of a slowdown.

The government disclosed plans to extend loans under the Credit Guarantee Fund at a closed-door meeting held by Treasury and Finance Minister Nureddin Nebati in Ankara, said the person, who spoke on condition of anonymity to discuss information that isn’t public.

(Nebati confirmed the news though declined to give any details about the volume.)

The fund, resurrected after an attempted coup in 2016, has allowed the government to underwrite billions in new credit to businesses by enabling commercial banks to share some of their lending risks with the Treasury.

The new stimulus would be among the most ambitious steps yet by authorities to sustain growth in the $830 billion economy as the election year approaches.

The threat of a slowdown has already prompted the central bank to deliver a shock cut to interest rates in August. In an effort to lower the cost of credit and channel money into priority sectors, it’s also recently tweaked rules requiring banks to hold collateral against the commercial loans they provide. 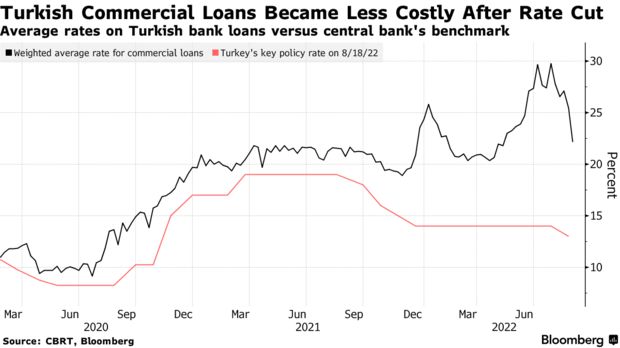 Boosting the economy by saturating it with credit is a policy long favored by President Recep Tayyip Erdogan’s government. The approach previously backfired as new loans caused the economy to overheat and swelled the current-account deficit, contributing to the lira’s crash in August 2018.

For much of this year, the economy has powered on despite inflation rising to levels unseen for over two decades. Turkey’s growth has outpaced most peers so far this year on the back of strong consumption and exports, with gross domestic product rising an annual 7.6% in the second quarter.

But the risk of a recession in Europe, the main destination for Turkish shipments abroad, and higher energy prices are now among factors that can put the brakes on the economy in the coming months.