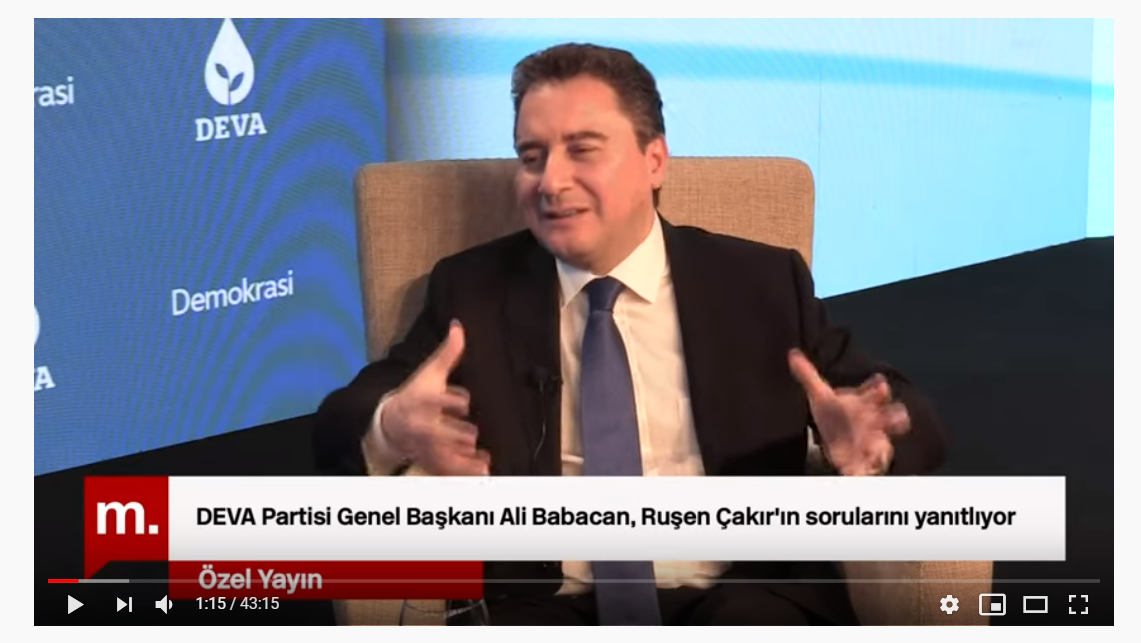 Erdogan’s former economy czar Ali Babacan, founded his own party, called the DEVA Party, which is slowly moving the needle on political polls. Babacan focuses on social media interviews to spread the good word, as main stream media remains closed to all opposition parties and dissenting views.  His economic messages are a hit on YouTube. Babacan espouses a return to orthodoxy in economic policies, as well as to AKP’s conservative but democratic roots which was on display during its first term in power. His messages are also resonating in the Palace. Recently, President Erdogan began a campaign to convince people that Covid-19 is the end of Western style capitalism, “an Islamic economic renaissance” being the only path to salvation.

Turkey must restore its economic credibility if it hopes to secure needed foreign funding and return to growth, said President Tayyip Erdogan’s former economy czar who recently broke away and founded his own party.

Ali Babacan, a 53-year-old former deputy prime minister, resigned from Erdogan’s AK Party last July over “deep differences” about the direction of the party he helped to found. In March he formed the Deva (Remedy) Party.

Babacan said that Turkey risks another slump in the lira unless it can access fresh sources of foreign exchange, after the currency fell to a record low last month, but that trust in its economic institutions had eroded.

Erdogan last year sacked the central bank’s chief for not cutting interest rates. The bank has since slashed rates well below inflation, stoking concerns over its independence. It has also used billions in foreign exchange reserves to defend the lira, prompting Ankara to seek foreign funding.

“Turkey must find that forex soon” but it needs to “reinstate the reputation and confidence in its economy management first,” Babacan said.

“The institutions had already lost their credibility,” he said. “You can dictate onion prices . . . but you cannot dictate the foreign exchange price, that’s not how the international markets work.”

Babacan, well regarded by foreign investors, served as economy and then foreign minister before becoming deputy prime minister from 2009 to 2015.

Opinion polls currently show his party with just 1 percent or 2 percent support. Yet even incremental gains for Deva could spell trouble for Erdogan, who faces another election by 2023 at the latest. Babacan said it was unlikely Erdogan’s government would last until 2023, adding he expected an election next year or in 2022.

The lira has been hit by fallout from the pandemic and investor concerns over depleted net FX reserves and the country’s relatively high foreign debt obligations. Ankara won some support when Qatar tripled an existing currency swap line to $15 billion last month.

Investors and bankers say Turkey would adopt capital controls, such as limits on transfers or withdrawals, only in a worst-case scenario. But Babacan said Ankara was already heading in that direction. “Capital controls is not a black and white area, it consists of shades of grey. Turkey is going toward a darker grey,” he said.

The European Central Bank could extend a swap line in order to protect a key trade partner, he said. “If the Turkish economy collapses today, this would harm the economies of Europe. The ECB must be seeing this, and they must play an active role.”

Turkey has witnessed an outflow of financial capital, worth $10 bn since the beginning of the year, as haphazard and arbitrary financial policies annoyed investors. Independent economists claim Turkey won’t experience any difficulties on the currency front in summer, but TL may come under renewed attacks in autumn, if tourism season fails to generate much needed FX revenue.