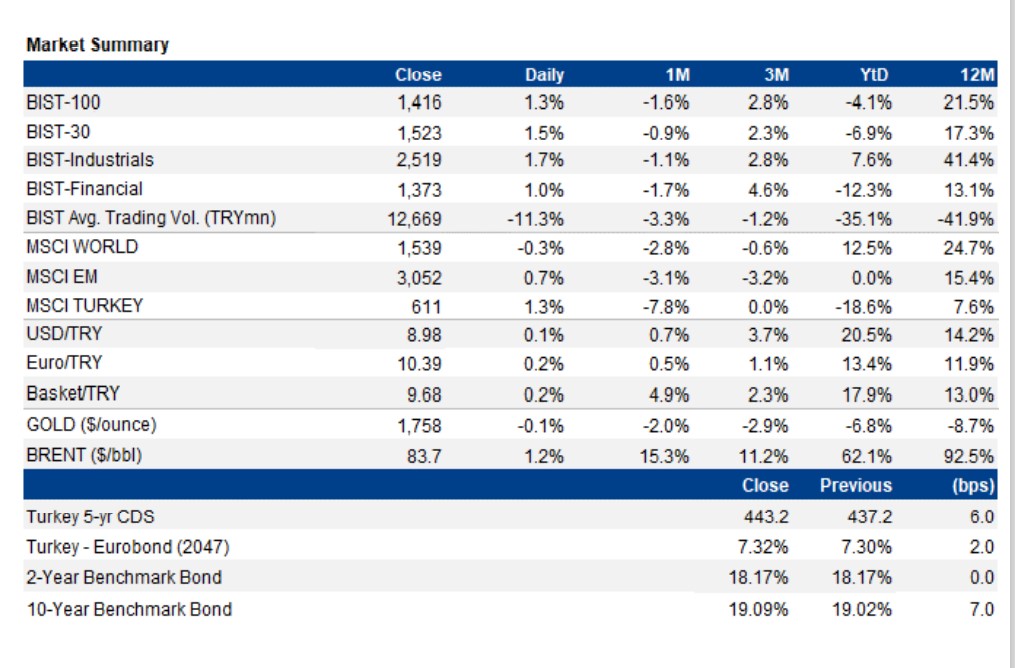 Governor Kavcioglu said rate cut was not a surprise for lira

President Erdogan: Turkey out of patience for attacks from northern Syria

President Erdogan said Turkey has run out of patience after the latest deadly attack on its police force in northern Syria and violent activities targeting the country’s territories. Erdogan said Ankara is determined to eliminate threats emanating from northern Syria, either itself or with the support of active local forces. “We will take the necessary steps in Syria as soon as possible.”, he said.

Two Turkish special operation police officers were killed and two others wounded in the Operation Euphrates Shield zone of northern Syria when the YPG, the Syrian offshoot of the PKK terror group, struck an armed vehicle with guided missile.

This was the first monthly surplus since October 2020. CA posted a USD4.1bn of deficit in the same month of the previous year. The main drivers of a USD4.6bn of YoY improvement in the current account were USD5.4bn of drop on the foreign trade deficit (USD[1]2.8bn) and USD1.8bn of rise on the net service revenues (USD+4.1n).

BoP Statistics have been revised in line with the “International  Trade in Services Statistics, 2020” bulletin published by TURKSTAT on September 28, 2021. On the other hand, total net primary and  secondary deficit increased by USD303mn to USD791mn. Normalization trend on gold imports continued. In August, net net non[1]monetary gold exports was USD-0.2bn (Aug.20: USD-3.8bn). However, net energy deficit increased by USD1.9bn to USD3.7bn.

FDI recorded a net outflow of USD319mn (first monthly outflow since Oct.20) whereas portfolio investments recorded a net inflow of  USD1.3bn. Non-residents were net buyers in equity and in GDDS markets by USD523mn and USD336mn, respectively. Regarding  the bond issues in international capital markets, other sector realized net borrowings of USD750mn.

Other investments recorded a net  inflow of USD7.3bn. Banks’ currency and deposits within their foreign correspondent banks decreased by USD318mn whereas nonresident banks’ deposits held within domestic banks increased by USD1.5bn. Regarding the loans provided from abroad banks and government realized net repayments of USD838mn and USD57mn, respectively whereas other sectors realized net borrowing of USD759mn.

In 8M21, current account (CA) deficit was USD14bn (8M20: USD-26bn). According to a yearly comparison on 8-month figures, foreign trade deficit narrowed by USD6.4bn to USD19.2bn whereas net service revenues increased by USD6.5bn to USD12.5bn. Net gold imports decreased by USD10.7bn whereas net energy imports increased by USD6.2bn in 8M21 compared to the same period of the previous year. Hence, the net contribution from the gold and energy imports was USD4.5bn. Net travel revenues increased by USD5.1bn in the same period. Core surplus (excl. gold and energy) rose by USD7.5bn to 10.5bn. Strong upward trend in exports, normalization in gold imports and the strong progress in the vaccination program stimulating tourism activities were shown as the main  drivers of the improvement on year-to-date figures.

The government expects USD 21bn of CA deficit in 2021 according to 2022-2024 Medium Term  Program. According to the current realizations and trends, this figure seems achievable. Hence, the risks are downward on our year[1]end current account deficit forecast is at USD22.5bn which refers to 2.9% of GDP. Turkey’s CA data of September would be announced  on November 11.

Turkey’s unemployment rate was 12.1% in August.

Treasury borrowed 11.6 tons of gold (around TRY5.9bn) from the market via gold bond and lease certificate issuances.

Therefore, the total amount of the borrowings with 5 of 10 planned auctions for October reached to TRY21.3bn, covering around 46.1% of the TRY46.2bn redemption (also, 53.2% of domestic borrowing projection of TRY40bn for October completed). Treasury’s next scheduled issuances would be on