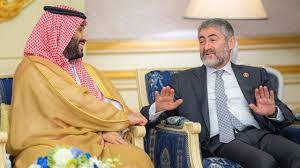 Earlier this year, Saudi Arabia and Turkey declared their determination to launch a “new era of cooperation” at the end of a visit by the Crown Prince to Turkey in June when the two leaders agreed to work toward establishing closer ties in several sectors including energy, defense and the economy.

Turkey is hoping for a currency swap deal with Saudi Arabia, after it established one with the United Arab Emirates earlier this year.