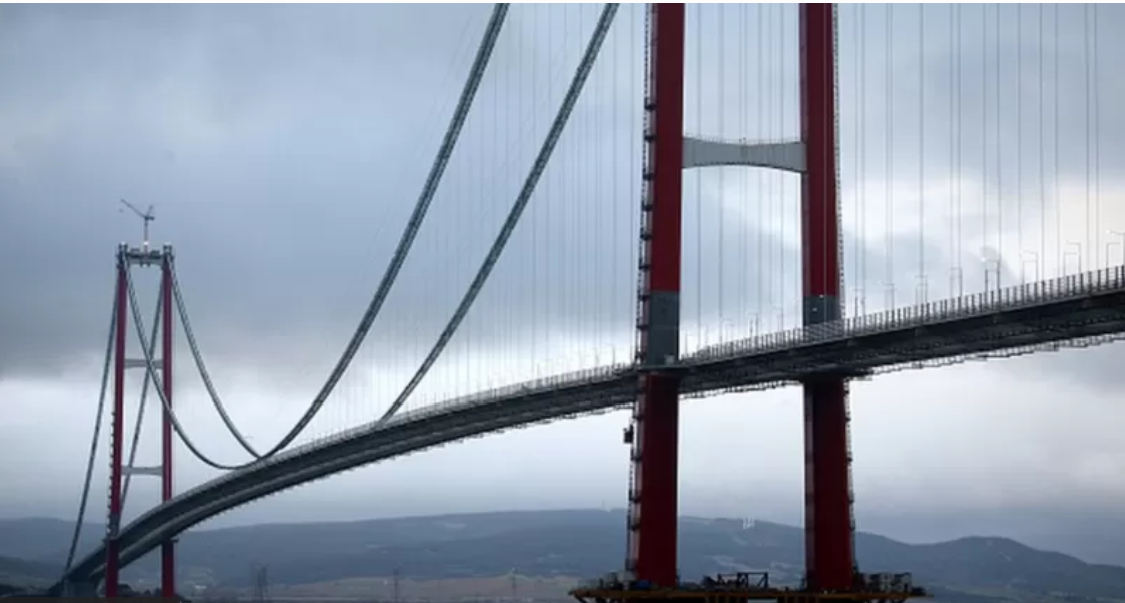 A massive suspension bridge was unveiled in Turkey on March 18 that will shorten the journey between Europe and Asia to just six minutes.  It shortens the journey from major economic hubs of Istanbul Izmir, with the expectation that residential development and economic activity will shift to the vicinity of the new corridor.  Yet, the very high toll may mitigate a lot of the expected economic benefits.

President Recep Tayyip Erdogan inaugurated the 1915 Canakkale Bridge built across Turkey’s Dardanelles Strait that connects the European and Asian shores of the key waterway, according to reports.

Until now, vehicles traveling between Anatolia and the Gallipoli peninsula had to cross the Dardanelles in a one-hour ferry journey, which including waiting time amounted to as much as five hours. The journey will now take around six minutes.

“These works will continue to provide profit for the state for many years,” Erdogan said at the opening ceremony. “These projects have a large share in putting our country ahead in investment, workforce and exports.”

Called the world’s longest suspension bridge, it is one of the major infrastructure projects that have been prioritized by Erdogan since his AK Party first came to power in 2002, including a new airport in Istanbul, rail and road tunnels beneath the Bosphorus Strait, and a bridge over it.

The 4,608-meter bridge was built by the South Korean contractors SK Ecoplant and DL E&C, in conjunction with Turkish contractors Yapi Merkezi and Limak. At its peak, some 200 South Korean staff, including those from subcontractors, worked on the bridge at Canakkale.

The bridge is named after the Battle of Çanakkale during World War I. It was one of Turkey’s most important victories, as the Ottoman Empire successfully fended off an attempt by the allied forces of Great Britain and France to take control of the Turkish Straits. The bridge has been painted in red and white to represent the Turkish flag.

According to Adil Karaismailoglu, Minister of Transport and Infrastructure, the number 1915 in the name of the bridge and the height of the bridge at 318 meters symbolize the Canakkale Naval Victory on March 18, 1915.

Turkish President Erdogan during the inauguration of the bridge on March 18, 2022. (via Twitter)

The inaugural ceremony was also attended by South Korean Prime Minister Kim Boo-kyum who said, “The 1915 Canakkale Bridge will leave this history of collision and conflict behind and will be a bridge between East and West, starting a new era of peace and prosperity.”

The bridge connects with a system of highways ringed around the Marmara Sea, home to nearly one-third of Turkey’s population and a region that hosts major industrial and commercial hubs.

“The Project will integrate the seaports, railways and airways in the Marmara and Aegean regions with highway transportation systems which will facilitate the economic development and balanced planning and structuring required by the industries in these regions,” said Mustafa Tanrıverdi, CEO of the 1915 Canakkale Bridge project.

According to Tanrıverdi, the bridge and its joining motorway infrastructure will place Turkey at the junction of the Modern Silk Road which stretches from China to England.

“Turkey is going to serve as a base for a signiﬁcant amount of merchandise trade ﬂow, via logistic centers that are still in the making. The project will be an important point of passage for this merchandise ﬂow, ultimately serving to boost the commercial mobility between Europe and Asia,” said Tanrıverdi.

While the bridge is  an architectural marvel, which is certain to increase economic activity around the Istanbul-Izmir corridor, not too many commercial vehicles may pass it, because the toll of TL200 one-way adds substantially to transport costs.  Many Turkish experts claim the bridge fails to pass the economic viability test, including potential externalities to overall economic activity.