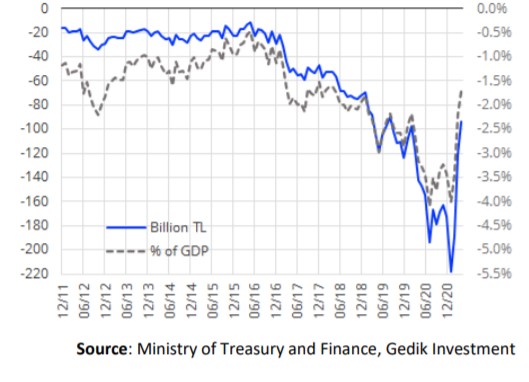 Budget deficit drops to below 2.0% of GDP as of April, mainly due to soaring tax revenues, but partially with the help of a base effect

In April, the central government budget posted a TL16.9bn deficit, compared to the TL43.2bn deficit in the same month of last year. There was also a TL1.7bn primary surplus, vs. the TL26.2bn primary deficit of April 2020. The YoY improvement is partially attributable to a base effect, as the government had deferred VAT payments for the March-June period by six months last year.

For the January-April period, there is a TL5.9bn budget surplus, which is way better than the TL72.8bn deficit registered in the same period of last year, while the primary balance points to a TL73.4bn surplus vs. TL17.5bn primary deficit last year.

Yet, adjusted for the IMF definition, the primary surplus drops to about TL20bn (TL80bn deficit in the same period of 2020). On a 12-month rolling basis, budget deficit stands at TL94.1bn, which is less than 2.0% of GDP. Yet, base effects have a significant role in this outcome and budget deficit/GDP ratio is likely to rise towards 4.0% of GDP, particularly in the second half of the year.

Tax revenues point to a striking 33% YoY growth in real terms. Yet, YoY growth rates would be misleading due to the low base effect of last year due to the pandemic related sudden halt. In any case, we may still argue that tax revenues, particularly the VAT revenues, SCT revenues on automotive and transaction tax revenues, remains rather strong, indicating the ongoing strenght in domestic demand. Meanwhile, SCT revenues from petroleum products seem to have contracted by 43% YoY in real terms in April and 33% YoY for the January-April period, as the government sacrifices from SCT in order to avoid pump price hikes as a result of rising global oil prices. If the current strategy is extended until year-end, the total revenue loss from this channel might actually reach up to USD25-30bn.

On the other hand, we witness about a 14.0% and 7.1% YoY deceleration in non-interest expenditures for April and for the January-April period (in real terms), implying that the constraint in discretionary spending persists.

We expect that tax revenues would breach initial targets significantly (by about TL65-70bn), attributable to various factors, such as robust domestic demand and tax collection so far, the recent 5% hike in the corporate tax rate to 25% from 20%, and the higher-than-projected CPI inflation. On the other hand, the non-interest expenditure target implies only a 9% nominal YoY increase (about 6% decline in real terms), which is also likely to be breached. In sum, we expect end-2021 budget deficit/GDP ratio at about 4.1%, which actually points to an improvement compared to our initial forecast of 4.9%. The government’s (unofficial) budget deficit target stands at 3.5% of GDP. Please refer to page 3 for 2020 budget realizations and official 2021 budget targets.