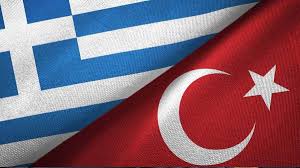 Since Turkey’s War of Independence, which ended in 2023 and largely fought to expel Greek forces from the country, Turkey and Greece enjoyed a love-and-hate relationship, attendant with endless jingoism on both sides.  Even though both nations are NATO members, and tourist traffic between the countries is buoyant, political relations are always marred by one dispute or the other. So far, neither country attacked the other, and military clashes are extremely unlikely in the foreseeable future, threats there of continue occasionally.

The latest excuse to antagonize each other is the sharing of the disputed East Med waters and the hydrocarbon resources believed to lie underneath. Turkey doesn’t recognize the Greek Cypriot Administration as the sovereign of the island, meaning that the Turkish state Northern Cyprus Turkish Republic claims ownership of the coastal waters, as much as GCA does. Both sides are building coalitions to buttress their case, but ultimately this flare-up is much ado about nothing. This is because with LNG flooding the Mediterranean market, a pipeline from Cyprus  to Italy run by a Greek-Israel-Egypt consortium is not economically feasible.

Nevertheless, with both nations needing external enemies to conceal economic difficulties at home, it is fun to listen to the threats and insults hurled mutually.

According to Voice of America,  tensions between Turkey and Greece are escalating as both sides vow to defend their territorial rights.

The increasingly acrimonious dispute centers on a scramble for energy in the contested waters of the Eastern Mediterranean. Athens and Ankara are both backing their words with displays of naval force, and fears of a confrontation are growing.

On Monday, the Greek Kathimerini newspaper published what it described as Greek defense “deterrent scenarios” against Turkey. The scenarios include using force if Ankara goes ahead with planned drilling near the Greek Island of Crete.

Ankara says the drilling is part of a deal struck last year with Libya’s internationally recognized Government of National Accord. Under the Libyan agreement, Turkey can search for energy in a large swathe of the Eastern Mediterranean. But Athens insists the deal violates the territorial waters of some of its Greek Islands.

“You [Greece] had better collect yourself and know your place. If you don’t know your limits, then what Turkey would do is obvious,” said Erdogan.

“I want to underline with mathematical certainty that Greeks would not want to stage a war with Turkey,” Akar told a private broadcaster last Thursday.

“Both sides have their naval assets in the East Mediterranean, but I don’t expect an all-out war,” said former Turkish ambassador Mithat Rende.

“But there might be skirmishes,” he added. “Some conflicts can start of accidents or skirmishes it can grow. I hope common sense will prevail.”

The discovery of vast gas reserves in the Eastern Mediterranean sparked the latest Greek Turkish tensions.

Athens is protesting Turkish drilling plans in 24 locations in the Mediterranean Sea that it considers Greek territory.

Greece has formed a regional energy alliance to coordinate efforts to search and develop hydrocarbons in the East Mediterranean. Among the members include Israel, Egypt, and Cyprus, all countries Turkey has strained relations with.

“With this changing dynamic in the Eastern Mediterranean, with natural gas resources and with this anti-Turkish alliance emerging, I think Turkey feels the need to protect its interests. By pursuing this drilling in the region,” said Ogutcu.

“Turkey is heavily dependent on imported gas and oil,” said Rende. “What we need is our own resources and benefit from the offshore energy reserves we believe are there. The East Med is of vital interest to Turkey.”

However, Ankara is facing mounting diplomatic pressure. Last week Washington called for Ankara to immediately stop drilling in contested waters around Cyprus. The European Union, of which Greece is a member, is also sharply criticizing Turkish drilling plans.

But Turkey’s navy is the largest in the region and the stakes are so high, it is unlikely that Turkey will back down, Ogutcu warns.

“Both [Athens Ankara] sides are engaged in brinksmanship. There is a very strong nationalist fervor; both sides fear that their rights might be usurped if they don’t take action,” Ogutcu said.  “The best thing is to freeze the problem, until a time when both sides can sit down and talk. But that needs an honest interlocutor. Accidents and miscalculated steps cause wars.”