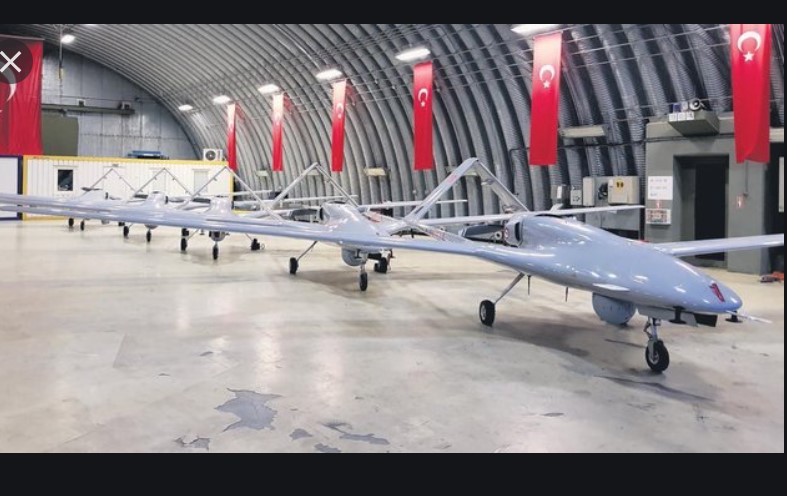 PATurkey comment:  TRT World is a fully-owned subsidiary of TRT, the Turkish state-owned radio and TV network. While there is a certain degree of editorial control by the politicians, it is more or less independent. Nevertheless, it is odd that such an article is published on its website.  The author, Mr. Omer Ozkizilcik, essentially he claims that Turkey’s drone technology is a military threat to Russia, but it is not a cause for confrontation.  Read on…

Turkey has demonstrated to other countries that it can limit Russia without the help of the US and Western European powers, adding a new element to Moscow’s strategic calculations.

The unwritten rules governing Russia-Turkey brinkmanship have enabled the two countries to continue their relationship despite blatant disagreements in several conflict zones. Joint energy projects as well as Turkey’s purchase of the S-400 air defense system worked as a buffer in relations to prevent a collapse similar to the aftermath of the shootdown of a Russian fighter jet by Turkey in 2015. Nevertheless, Russian officials have lately articulated open threats towards Turkey. What is behind Moscow’s change of tone?

“We strongly recommend that our Turkish colleagues carefully analyse the situation and stop fuelling Kyiv’s militaristic sentiment,” Russian Foreign Minister Sergey Lavrov said. Before this statement, Russian Foreign Ministry spokesperson Maria Zakharova criticised Turkey for pledging support to the Turkic population of the Crimean Tatars saying, “If this rhetoric continues, we will also have to pay attention to similar issues in Turkey. We wouldn’t like to do this, so I hope the Turkish Foreign Ministry will hear us today”.

The harsh and threatening rhetoric follows a tourism ban by Russia on Turkey. Even though Russia says Covid-19 infection numbers in Turkey are behind this decision, it appears to be a decision linked to the recent escalation between Ukraine and Russia. The last time Russia imposed this sanction was when relations collapsed in 2015. This is an explicit sanction to target the Turkish economy as tourism makes up 12 percent of Turkish GDP and Russian tourists are among the top visitors.

The Turkish-Russian brinkmanship remains intact as seen in Lavrov’s statement that Russia remembers how Turkey stood its ground on the purchase of the S-400 despite major pressure. However, a new dynamic may shape the future of Turkish-Russian relations. When Russia and Turkey normalised their relations in 2016, many nationalist Russian commentators and analysts claimed that this was a Turkish surrender to the might of Russia.

Five years later, there are discussions about the possible implementation of the “Turkish model” of combat in Ukraine. Analysts speculated about the possibility of a renewal of the Nagorno-Karabakh conflict in Donbas where Turkish TB2 Bayraktar drones will pave the way for the liberation of Ukrainian territory by the Ukrainian Armed Forces.

Turkey’s ability to stop Russia in Syria, Turkey’s success in reversing the military balance of power in Libya against Russian-backed warlord Khalifa Haftar and the crucial role Turkey played in Nagorno-Karabakh are not just military victories; they have become a model to limit Russia without the help of the US.

When the Turks shot down a Russian fighter jet that violated Turkish airspace, Turkey’s NATO partners left it alone. The Patriot systems deployed to Turkey as part of NATO’s effort to protect Turkey from potential aggression spilling over from Syria – except for Spain’s – were withdrawn by the countries. Moreover, Turkey has found itself alone in Syria’s Idlib and Libya to limit Russia. As if the lack and withdrawal of support wasn’t enough, Turkey was even criticised by NATO states for its support of the territorial integrity of Azerbaijan.

Turkey learned the hard way that it could not trust its NATO partners to balance Russia, so Turkey trusted its own: Selcuk Bayraktar – the mind behind the TB2 Bayraktar drone – has become the symbol of Turkey’s stance on limiting Russia. It is not a coincidence that Bayraktar’s Baykar Company formed a joint company with Ukraine named “Black Sea Shield”. Thanks to the Turkish-Ukrainian cooperation, Turkey produced the Akinci drone with even greater capabilities than the battle-proven TB2 Bayraktar drones.

Moreover, Turkey has leaned on its diplomatic capabilities to make alliances. Independent from NATO, Turkey cultivated its relationship and cooperation with Ukraine, Azerbaijan, Libya, the Syrian Interim Government and nations in Eastern Europe. By doing so, Turkey formed a small alliance to limit Russia.

In Europe, states like Poland and Romania have watched the Turkish model closely. They have seen the experience of Turkey and know that they can’t rely solely on NATO against Russia. Furthermore, the French position to charm Russia has further increased fears among these states.

Having seen that it is possible to limit Russia without the help of the US or Western European states, Eastern European states are showing more and more interest in the Turkish model. Therefore, it is no coincidence that Poland decided to purchase the TB2 Bayraktar drones. Hungary, Kazakhstan, Romania and Baltic states are further potential candidates.

In the eyes of Russia, the brinkmanship with Turkey is functional and in their interest to avoid a direct confrontation. However, the inspiration Turkey provided for Eastern European states is something new to the Russian calculation. Russia fears that other states in Eastern Europe might follow the Turkish lead and limit Russia without relying on the US and Western European states like France.

Currently, Turkey has begun to export its model and Russia seems to be sanctioning Turkey for it. And it appears that Ankara won’t step back. After time, Moscow will see that sanctions do not work and will be forced to make a tough decision to either risk an unwanted confrontation with Ankara or to continue playing according to the unwritten rules governing Russia-Turkey brinkmanship.

This is a decision for the future and time remains until then. In this manner, one can expect Turkey to offer Russia incentives to decide on the latter. A new joint project to increase the buffer in the relationship might be of help. Or, the calculus may change entirely if the Biden administration sees what the former members of the Warsaw Pact and the Soviet Union see in Turkey.

Disclaimer: The viewpoints expressed by the authors do not necessarily reflect the opinions, viewpoints and editorial policies of TRT World.