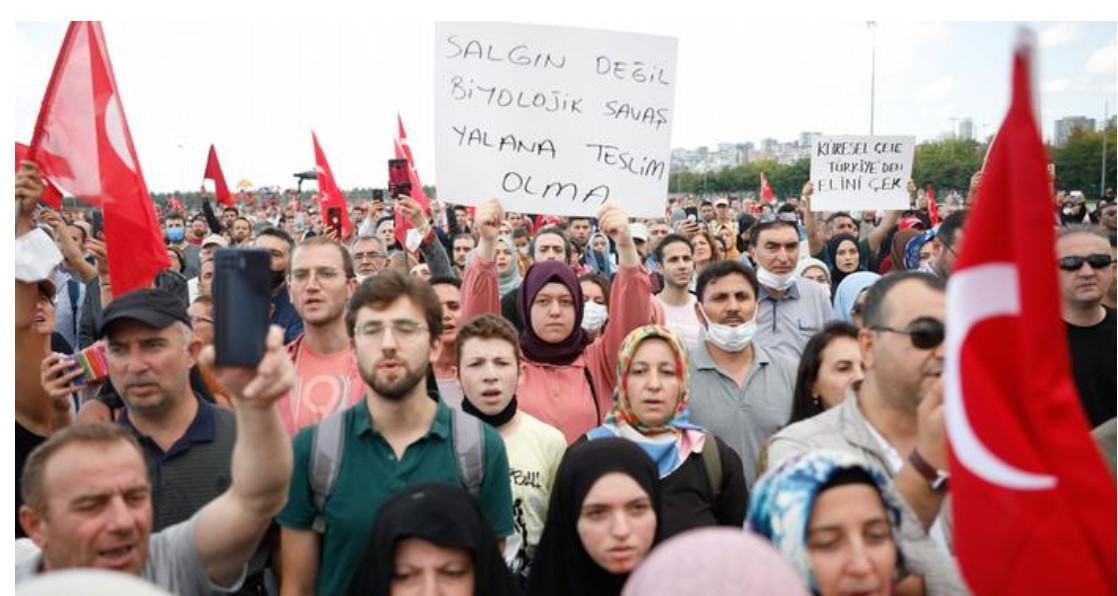 Turkey had a super-spreader event of her own, as legendary Islamist author Abdurrahman Dilipak  led a rally of vaccine opponents.

More than 2,000 Turks demonstrated in Istanbul on Saturday against official coronavirus-related mandates including vaccinations, tests and masks, responding to new government measures and an inoculation push.

In Turkey’s largest such protest, mostly maskless people shouted slogans, held placards and Turkish flags, and sang songs in defense of what they called individual rights, echoing anti-vaccine rallies in some other countries.

“This pandemic is just going on with even more restrictions on our freedoms and there’s no end to it,” said Erdem Boz, 40, a software developer. “Masks, vaccines, PCR tests might all become mandatory. We’re here to voice our discontent with this.”

On Monday the government began requiring proof of vaccination or a negative COVID-19 test for all users of intercity planes, buses and trains, as well as for those attending large events such as concerts or theatre performances.

According a poll cited by columnist Abdulkadir Selvi, 182.% of the respondents refuse the jab.

All unvaccinated school employees are required to take a PCR test twice per week. Masks and social distancing are required in public.

Some 64% of Turks have received two vaccine shots under a national programme that has administered more than 100 million jabs.

Still, about 23,000 new cases emerge daily, prompting the health minister, Fahrettin Koca, to warn this month of “a pandemic of the unvaccinated”.

On Saturday, Koca said on Twitter: “Vaccines are the final solution! Rules are very necessary.”

According to virologists and health care experts, Turkey may be developing her own brand of variants, but lack of information from Health Ministry prevents doctors from proper treatment.

Protesters attending the government-approved rally in Istanbul’s Maltepe district were not required to show proof of vaccination nor a negative test, according to Reuters witnesses. Police did not intervene.

“We’re against all these mandates,” said Aynur Buyruk Bilen, of the so-called Pandemic Resistance Movement. “I think that the vaccines aren’t complete, and that it’s an experimental liquid.”

Wide-spread vaccine denial is a headache for the Erdogan administration, which promised no more lock-down or curfews in the winter.