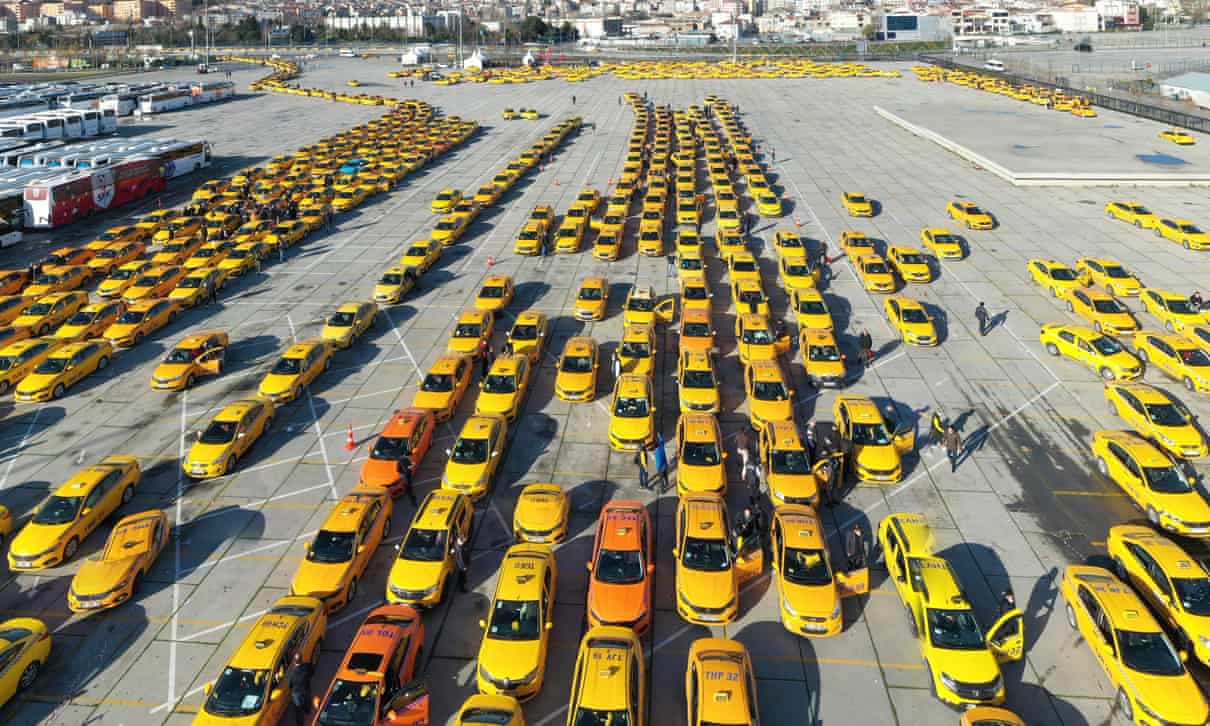 Beneath the minarets of Istanbul’s fabled skyline, an unusual turf war is simmering between the powerful taxi owners’ association and the city authorities.

Being a cab driver in the metropolis spanning two continents and three waterways isn’t easy. Unlike other global cities, drivers don’t own their own cars – instead, Istanbul’s 50,000 cabbies rent the 17,395 licensed cars in operation, working in shifts.

When Turkish president Recep Tayyip Erdoğan was mayor of Istanbul in the 1990s, the city was home to about 8 million people. Since then, the population has doubled, but the number of taxi licences available hasn’t changed. Demand has created a cartel of wealthy licence holders: the price of a licence fluctuates, but is currently 2.6m Turkish lira (£214,000).

As a result, the industry has a brutal reputation. Many licence owners remain anonymous, using brokers to sublet their cars, and their union – which leans towards Erdoğan’s ruling Justice and Development party (AKP) – has significant influence within both Istanbul’s politically divided transport coordination centre and the national transport ministry. Uber tried to enter the Istanbul market in 2014, but was banned thanks to lobbying from the union, which called them terrorists. Last week prosecutors filed an indictment against Uber Turkey’s chief official on the grounds of unfair competition, demanding a prison sentence of up to two years.

Fights between yellow cab drivers and pirate outfits are common; some involving knives and guns turn deadly. If customers are lucky enough to find a cab, it’s often a rough deal for them too. Sexual harassment, racism, overcharging, rudeness and unsafe driving are persistent problems.

After receiving a record 43,000 complaints about driver behaviour so far this year, the Istanbul municipality has accelerated efforts to reform the city’s taxi operations. Now the battle lines have been drawn, and things could get ugly.

“We want to end the privatisation of the taxi industry and run it through the municipality instead, the way it works in Berlin and New York and Dubai. Only in Turkey we have this system,” said Utku Cihan, the head of Istanbul municipality’s transport management.

“We are working on expanding the rail network and we’ve moved bus lines to be publicly owned; we want a climate where people can rely more on public transport as well as taxis. But it’s just a fact that we don’t have enough cabs. We have commissioned reports which show we need to add 6,000 [licenced taxi] plates but the union is refusing,” he said.

“Taxis are just one part of the transport system but we need to integrate it better to provide better-quality services for the whole city. It’s a difficult struggle, but we will keep trying.”

The taxi owners’ union, for its part, says that reform efforts should focus on improving technology for more efficient use of taxis, rather than increasing the number of cars on the road, which will drive up competition. Eyüp Aksu, head of the taxi owners’ association, has also argued that the city’s notorious traffic means fare prices should be increased to make shorter journeys more worthwhile for drivers.

For some drivers, there are worries that working conditions will not improve no matter who is in charge.

“I have been driving this car for five years and never met the owner. I just pay my daily rent at the car centre. They’re a total mafia… We have no social security. Anyone can do it, if you are willing to earn so little. They don’t do criminal checks. It’s not a nice job,” said Serdar Yilmaz, a driver taking a break at a taxi stand in the nightlife district of Beyoğlu.

“What  Istanbul mayor Ekrem İmamoğlu is saying is that he will give the licences to a ‘company’ the city runs, so maybe it will just replace the current plate owners with new owners. The licences need to belong to taxi drivers themselves.”

Municipality proposals to increase the number of licences have been rejected by Istanbul’s transport coordination centre – where representatives from AKP-loyal ministries and public institutions have a majority of votes – nine times in the last year.

Compromises from İmamoğlu’s office, which eventually suggested an additional 1,000 licences rather than 6,000, were turned down.

For now, the municipality has decided to press on with setting up its own licence system in parallel to the existing one. So far it has recruited 1,000 dolmuş (shared minibus) drivers who lost business owing to the pandemic for the new fleet.