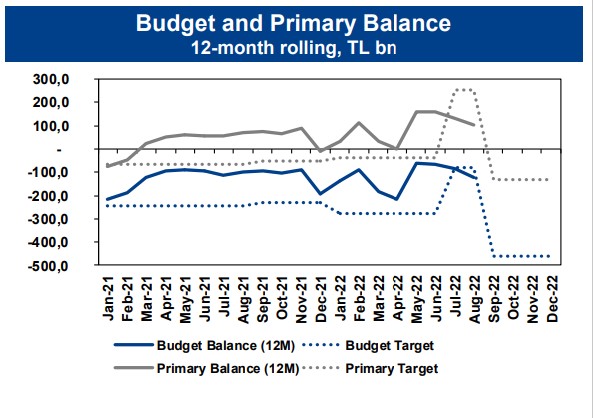 In August, budget reported  a surplus of TRY3.6bn (Aug.21: TRY+40.8bn, Jul.22: TRY-64bn). Even though there was no consensus available for the data, Treasury cash balance (a leading indicator), had yielded a TRY28.7bn of surplus in July, lower than TRY 35.5bn compared to same period in the previous year. Hence, we could say the budget surplus (lower than TRY 37.5bn in YoY basis) provided a similar outlook with cash deficit in August.

We should recall that the VAT rates on basic goods were slashed recently to fight against inflation. Hence, indirect tax revenues indicate that economic activity still stays at the positive side.

Deficits to expand rapidly for the rest of the year

As of August 2022, 12-month budget deficit was TRY 121.6bn (2021: TRY -192.2bn). It is fair to say that there could be a significant increase in non-interest expenditures in the rest of the year when we compare the year-to-date realizations and revised target levels.

Potential energy import bill and transfers to FX protected deposits could be the main drivers. On the other hand, there are significant uncertainties on the performance of tax revenues when we take in to account potential momentum loss on the economic activity. As  the steady erosion in  purchasing power, driven by inflation,  puts  downward pressure on the domestic demand, global slowdown  also potentially limit external demand. In addition to the pace of the economic activity, the levels of the energy prices would continue be an important determinant for the budget performance.