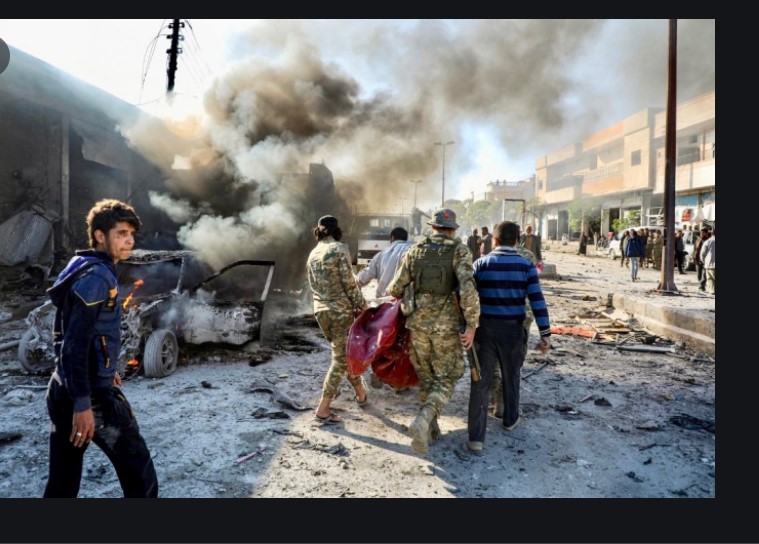 The region’s odd couple Turkey and Russia have successfully compartmentalized their relations, but the Chinese walls between commercial-military partnership and politics may break down in Syria.  Russia or Assad’s forces in conjunction with Russia are bombing areas under Turkish control constantly, raising the cost of occupation to Ankara, as well as indirectly helping PYD/YPG militants to battle the Turkish army.

Russian jets hit a gas facility, a cement factory and several towns and cities in northwestern Syria near the Turkish border on Sunday, as Syrian army artillery killed seven civilians and injured 14 medics in an attack on a hospital in the area, witnesses and rebel sources said, according to Reuters.

A gas facility was hit near Sarmada city in Idlib province and dozens of trailers carrying goods in a parking lot near the border crossing of Bab al Hawa were set aflame in the latest attack on fuel facilities that serve an economic lifeline for a region that is home to more than four million people.

Western intelligence sources say Russia was behind a ballistic missile strike earlier this month that set ablaze dozens of local oil refineries near the towns of al-Bab and Jarablus further east in a rebel-held area where Turkey holds sway and has a significant military presence.

The spokesman for the National Army, a Turkish-backed rebel alliance in the northwest, said Russia, which backs the government in Damascus, sought to destabilise the last rebel stronghold in Syria and disrupt commercial activity but the strikes did not signal an imminent major assault against Idlib.

It said a statement had been sent to Russia asking for the attacks to stop immediately and Turkish troops had been alerted.

The Turkish Defence Ministry said earlier that five people were killed and 10 injured in an artillery attack by Damascus-backed forces on the hospital, one of dozens of hospitals hit by a Russian-led bombing campaign last year.

Videos received by Reuters from two witnesses showed a ward damaged and civil defence rescuers carrying bloodstained patients outside. Reuters could not verify their authenticity.

Fighting between Syrian army forces and rebels has subsided since a deal a year ago ended a Russian-led bombing campaign that had displaced over a million people in the region which borders Turkey after months of fighting that killed several thousand civilians.

Residents say although there have been no major hostilities, the calm is occasionally ruptured by Russian strikes on rebel outposts and by Iranian and Syrian-backed militias shelling towns and cities in the enclave.

Syria and Russia say they only target militant Islamists and deny any indiscriminate shelling of civilian areas or deliberate attacks on hospitals and infrastructure.

Russian attacks may serve as a signal to Turkey to cede territory to Assad forces, or a warning not to mothball S-400 anti missile systems in the face of severe US and NATO pressure.

Turkey can’t afford to quit Syria, because that would open the way for 1-2 million refugees from the Idlib Province to flood the country.  Ankara also fears US and Russia helping establish a pro-PKK Kurdish state under her nose in Northeastern Syria.

Turkey is pushing back. According to Arab News, Turkey is attacking the mainly Kurdish militia the People’s Protection Units (YPG) in northwestern Syria and backs the Syrian National Army against them. It sees the YPG as a Syrian offshoot of the Kurdistan Workers’ Party, which is outlawed in Turkey and is listed as a terrorist organization by Turkey, the US and EU.

Heras said that Russia’s guardianship of YPG-controlled areas in Aleppo was useful for Russia and that the Turks, who would like to take over those areas, were well aware of this.

“Turkish movements in these areas are messaging to the Russians that the Turks have the means to weaken Russia’s hand in the game for control over northern Syria.”