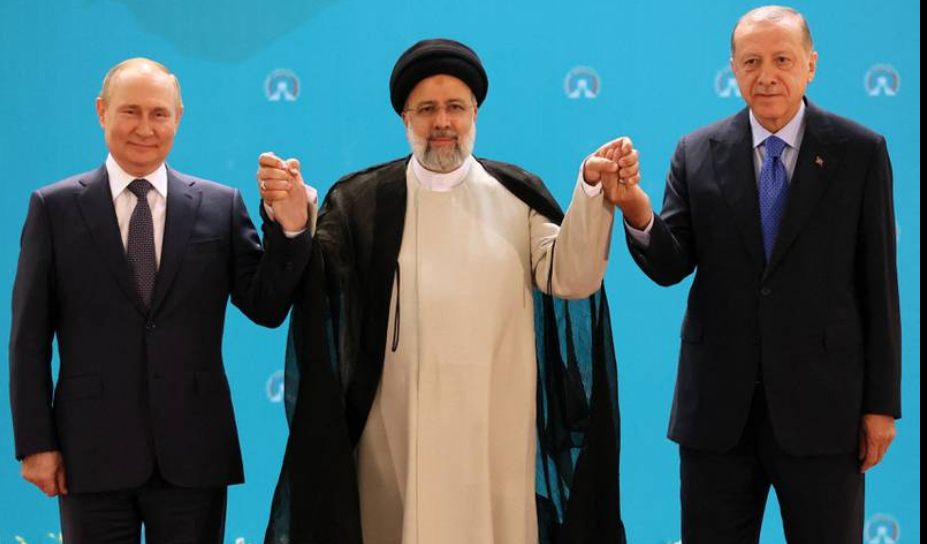 In Tehran last week, Turkish President Recep Tayyip Erdogan made it clear to Russian President Vladimir Putin that he is categorically opposed to Moscow’s plan to outsource its Syria mission to Iran. This is according to sources familiar with the talks at the Russia-Turkey-Iran summit convened under the pretext of reviving the Astana Peace Process for the war-torn country.

Mr Erdogan softened his warning to the Iranians, saying that Ankara would not accept Tehran’s expansion of its support to the Assad regime. These designs are mere wishes with no real prospects, he added. But Mr Erdogan also stressed that any attempt by Iran to dominate Syria would be in direct contradiction with Turkey’s national interests – and that Ankara is very serious about its national interests.

The Iranian leadership, meanwhile, confirmed to Mr Putin that it is ready to take control of Syria. Mr Putin acknowledged that Russia’s role in the country is waning due to its preoccupation with Ukraine. While accepting Mr Erdogan’s warning on Iran, the Russian President told the Iranian leaders that Moscow remains a strategic ally to Tehran, and that it grants the latter the mandate to replace Russia in Syria at this juncture – regardless of Mr Erdogan’s views and threats. Mr Putin went further, according to my sources, accepting that Lebanon’s future is subject to Iran’s calculations, as the Kremlin understands Tehran’s interests in that country.

Contrary to some perceptions, the Tehran summit was not convened in response to the GCC+ summit in Jeddah earlier this month. It was designed to try to reach a trilateral division of roles in Syria. And while they all agreed to continue the dialogue, no agreement was found.

Mr Erdogan showed little interest in co-operating with Russia in Syria. While he did tell Mr Putin that he was keen to find a common language to avoid confrontation, he also reaffirmed that Turkey’s assessment of its interests has not changed – and that Ankara will continue to carry out military operations in Syria when needed. Moscow understands that Ankara is even more determined to create buffer zone in northern Syria, particularly as Russia is preoccupied with Ukraine and the US is preoccupied with Russia, Ukraine and Iran.

Be that as it may, Tehran considers Syria to be vital for its regional project. It seeks to extend what it considers to be its “frontline” with Israel, from Lebanon to Syria, because this would give it leverage during times of confrontation.

During their bilateral meeting, Iranian President Ebrahim Raisi requested Mr Putin to increase pressure on the other UN Security Council members involved in the talks to revive the 2015 nuclear deal with Tehran. Mr Raisi stressed to Mr Putin that Iran will not make concessions that would make it look weak, including accepting the US’s refusal to delist the Islamic Revolutionary Guard Corps as a terrorist group. Whether Tehran’s position negates any chances of a deal remains to be seen.

Of utmost importance to both Russia and Iran is the speedy conclusion of their pact. I am given to understand that two leaders discussed the possibility of Mr Putin returning to Tehran to sign the pact that would resemble the one the Iranian regime signed with China last year. Progress on this front shows that, even as the US continues to be in retreat from the Middle East, the China-Russia-Iran alliance is being advanced pragmatically, meticulously and resolutely.

US President Joe Biden’s visit to the region failed to reverse some Arab states’ gradual shift away from Washington’s orbit. And as long  as this trend continues, the prospects for a US-led axis in the region remain weak.

At the Tehran summit, Hezbollah may have been a notable absentee but it remains Iran’s strongest proxy in Syria and Lebanon. Mr Erdogan has traditionally not raised the issue regarding the militia group’s presence in Syria, but he could be forced to do so when Iran starts implementing its project there. Hezbollah is moving to position itself either alongside Iran’s forces or on their behalf, as and when circumstances dictate.

In Lebanon, where the group doubles up as a political party, it is in the midst of turning the country’s oil and gas resources into ammunition for its “resistance” – despite the country’s economic problems and its urgent need to monetise those resources. Hezbollah is doing so by threatening to obstruct the proposed demarcation of maritime borders between Lebanon and Israel. Its two key objectives are: securing its share of Lebanon’s wealth, and ensuring its unhindered movements between Lebanon and Syria by both land and sea.

It is ironic that a US-Iran-Israel deal on nuclear and security issues and the resulting de-escalation are a much better choice for the likes of Syria and Lebanon – despite the free rein this option would give to Iran and Israel – than the choice of military confrontation. It is clear that Iran and Russia have decided to commandeer Lebanon and Syria for their mutual interests and calculations related to containment of Israel when needed. The Biden administration is still caught between wishing for a deal with Iran, hesitating about pressuring Tehran and Hezbollah for fear of retaliation, threatening to restore Trump-era “maximum pressure” sanctions on the Iranian regime, and/or blaming everything on the previous administration due to its withdrawal from the deal with Iran.

In the meantime, the realignment continues amid global political chaos. Perhaps the best scenario in the Levant at this juncture is the continuation of the status quo with all its flaws.