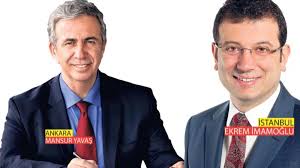 The mayors of İstanbul and Ankara, both members of the main opposition Republican People’s Party (CHP), have a comfortable lead over President Recep Tayyip Erdoğan for the presidential election, according to a new survey by the MetroPOLL company.

If two candidates were to go head to head in the election, Ankara Mayor Mansur Yavaş would get 54.4 percent of the votes against Erdoğan’s 32.2 percent and İstanbul Mayor Ekrem İmamoğlu would beat Erdoğan by 48.7 percent to 36.6 percent, showed the survey.

While the opposition has not announced its candidate for the elections due to take place in June 2023, the two mayors and CHP leader Kemal Kılıçdaroğlu are speculated as candidates.

Throughout the year, İmamoğlu and Yavaş have been ahead of Erdoğan in most head-to-head polls.

In the poll for the parliamentary elections, Erdoğan’s Justice and Development Party (AKP) keeps the lead with 26.2 percent of the votes, the survey showed.

The ruling party is followed by the CHP (21.4 percent) and the İYİ (Good) Party (10.9 percent), which make up the Nation’s Alliance.

The AKP’s ally in the People’s Alliance, the Nationalist Movement Party (MHP), gets only 4.2 percent of the votes, which means the opposition bloc is now ahead of the ruling alliance by 32.3 percent to 30.4 percent.

The Kurdish issue-focused Peoples’ Democratic Party (HDP) gets 9.1 percent of the votes, according to the survey.

The company announced the results without distributing undecided voters to the parties.

Given the decline of the support of Erdoğan and his party, opposition parties have been calling for early elections while the president insists the elections will take place as scheduled.