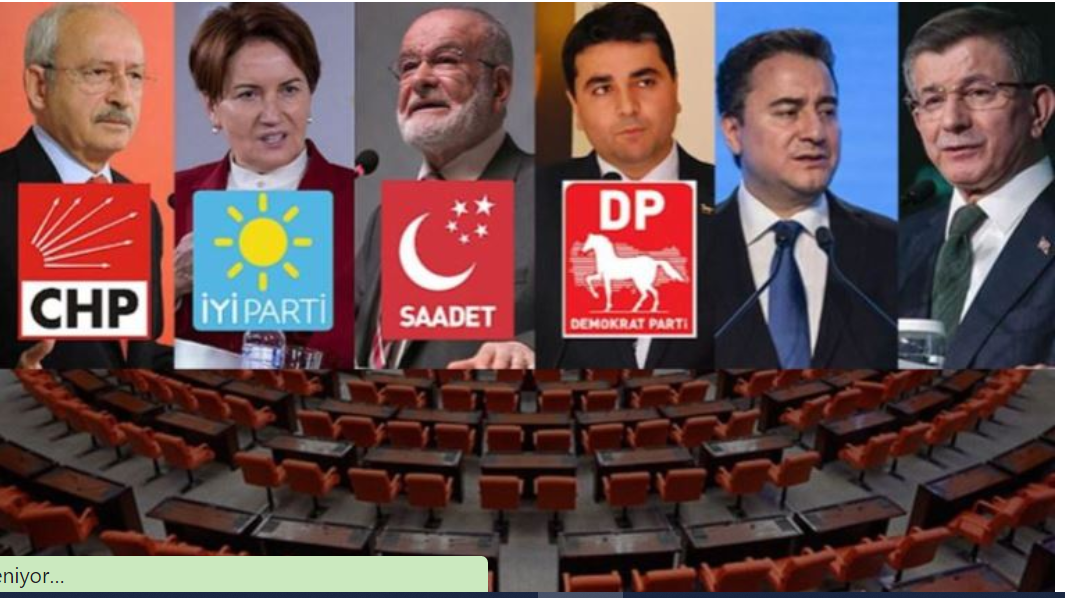 Six Turkish opposition parties are stepping up collaboration in their bid to unseat Tayyip Erdogan and his AKP at elections due by 2023, raising pressure on the president as opinion polls point to dwindling support for his ruling alliance.

Ignored for years by Western media for supposedly being impotent, fractious and devoid of vision, Turkish opposition parties are uniting under the leadership of main opposition party CHP’s chairman Mr Kemal Kilicdaroglu, who is also throwing a lifeline to the outcast of Turkish politics, pro-Kurdish equality HDP.  The rising star of the opposition is Mrs Meral Aksener, who leads IYIP, which has great potential to reinvigorate  Turkey’s true majority, namely the center right.

The opposition alliance is  a rainbow coalition of 6 parties, which unite on taking Turkey back to a parliamentary system, rather than Mr Erdogan’s one man-rule. The alliance consist of

These parties recently held a third meeting on drafting a common platform for the next election and plan weekly meetings to agree shared principles by year-end, those involved in the talks said.

“The opposition in Turkey is trying something that has never been tried before: getting united to confront the government,” political commentator Murat Yetkin said.

Support for Erdogan’s government is ebbing amid criticism of its handling of economic woes such as high inflation and unemployment, the COVID-19 pandemic and forest fires and floods.

The rise of the Turkish opposition began in 2019, when orchestrated by Kilicdaroglu, the constituents, as well as HDP reverted to strategic voting, stealing hundreds of municipalities from AKP.  Most notable are the victories in Ankara and Istanbul, two cities which had been under AKP rule throughout 21st century. The respective mayors, Messrs. Mansur Yavas and Ekrem Imamoglu are doing a stellar job despite filibusters by AKP-MHP controlled city assemblies and sabotage by Erdogan administration which take the form of budget cuts and presidential decrees progressively limiting municipality powers.

“The leaders of six opposition parties appear to have agreed on turning the next election into a kind of referendum on the presidential system that Erdogan introduced four years ago and considers one of his proudest achievements,” the NYT reported.

Turkey’s economy has been struggling with a soaring inflation rate and a downward spiral of its currency’s value.

In addition, Erdogan’s aggressive foreign policy hasn’t won him any battles on the international stage. His pursuit of Russian weapons systems has put him at odds with the US which has already voiced its concerns over Turkey’s human rights record.

The opposition alliance, dubbed the Nation Alliance developed  razor-sharp focus on Turkey’s economic ailments, benefiting from poll data which reveals deepening poverty and  a vast majority of voters who have lost faith in Erdogan’s ability to engineer a sustainable and equitable recovery.

More recently, opposition parties said the call for the expulsion of 10 ambassadors urging Turkey to release philanthropist Mr Osman Kavala was a tactic to distract the public from the country’s economic woes. Erdogan’s AKP has been losing public support and his job approval ratings are in decline, according to opinion polls.

On Tuesday, CHP and HDP voted to reject a presidential proposal giving the office war powers in Iraq and Syria for two more years. The proposal passed with AKP-MHP-IYIP votes, but this was the first time in recent history when major parties disagreed with the administration in a foreign policy topic.

Metropoll, a polling organization, revealed this week that for the first time in several years, more respondents said Erdogan would lose an election rather than win.

According to PATurkey data, AKP and MHP slipped a combined 8 percent in national polls since the beginning of the year. With the exception of avidly pro-AKP Optimar agency, there is a consensus that  the opposition alliance will defeat AKP-MHP in the next parliamentary elections.

Many Western observers still believe that Erdogan’s erratic moves in foreign policy, such as another military campaign in Syria, or loud defiance of the West could allow him to regain his popularity. However countless polls reveal that   citizens no longer care for these distractions, demanding immediate economic relief. Erdogan’s bizarre and frankly harmful economic theories, such as forcing retail chains to lower their sticker prices to combat inflation, demonstrate that he doesn’t have the wits to bring about prosperity.

As the global backdrop progresses to the disadvantage  of Turkey, with soaring energy prices and global financial conditions tightening, it is highly unlikely that common prosperity will increase sufficiently for voters to return to Erdogan’s tent by 2023, when the presidential and  parliamentary elections will be held in tandem.