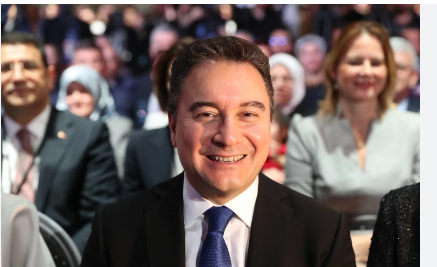 According to  official statistics agency Turkstat (TUIK in Turkish), monthly  CPI in November  was 2.88% M/M, which reduced the annual figure to 84.39%, after 15 months of unbroken increases. A group of private academicians’ alternative CPI, called ENAG, reported 170% consumer price increase. Another index compiled by Istanbul Chamber  of Commerce found provincial CPI  at 105%. Former economy czar and currently chairman of opposition DEVA party, Ali Babacan claimed on FOX TV news broadcast that inflation is no less than 200%.

DEVA Party Chairman Ali Babacan appeared in the Alarm Clock program on FOX TV. He doesn’t think  the announced inflation figures are  real. Former economy minister  said, “There is much higher inflation in Turkey than the figures announced by TURKSTAT.” Babacan said, “Everyone agrees that the real inflation is at least 200 percent.” said.

“What (official stats agency)  TÜİK has announced is of no value. Everyone agrees that real inflation is at least 200 percent.”

Babacan’s statements are as follows:

“Anyone  who visits markets for even the  most basic food items, would agree  that the inflation is 200 percent now”. He might not be far off the mark. According to Metropoll po0llicng agency CEO Mr Ozer Sancar “AKP is dropping in the polls..because the woman on the street perceives monthly inflation at 10-15%”

“For the last two years, there has been a profound loss in the purchasing power of our fixed-income citizens” added Babacan. A big scoop of income was taken out of everyone’s pocket through inflation, and then everyone is given a pay raise based on the  fake low inflation announced by TUIK. “The purchasing power stolen with the ladle is tried to be compensated again with the spoon”. Whoever has a fixed income is experiencing a huge loss of welfare.

There is a minority of people who are happy in Turkey, those who are well-heeled.  Did you know  that the government is transferring another 650 billion liras this year to those who already have money? Why and how? Thanks to a scheme called “Interest and exchange rate difference insurance”. You know, they invented something called Currency Protected Deposit Plan.

The scheme pays additional interest on TL deposits, if the bank offered rate is below the rate of TL depreciation vs the dollar or the Euro. The opposition claims this is unfair wealth from the budget to those who are already rich.

“What we have is theft our prosperity by  an unjust inflation tax”, sighed former  economy impresario.

The question of what the real rate of inflation is of huge importance to 2023 elections. Erdogan administration has promised “fair” adjustments to wages and salaries “so that no-one will be hurt by inflation”. But, if as Babacan and other experts claim the true inflation is higher by an order of magnitude than the figures provided by Turkstat, Erdogan will have a voter rebellion facing him going to the polls.