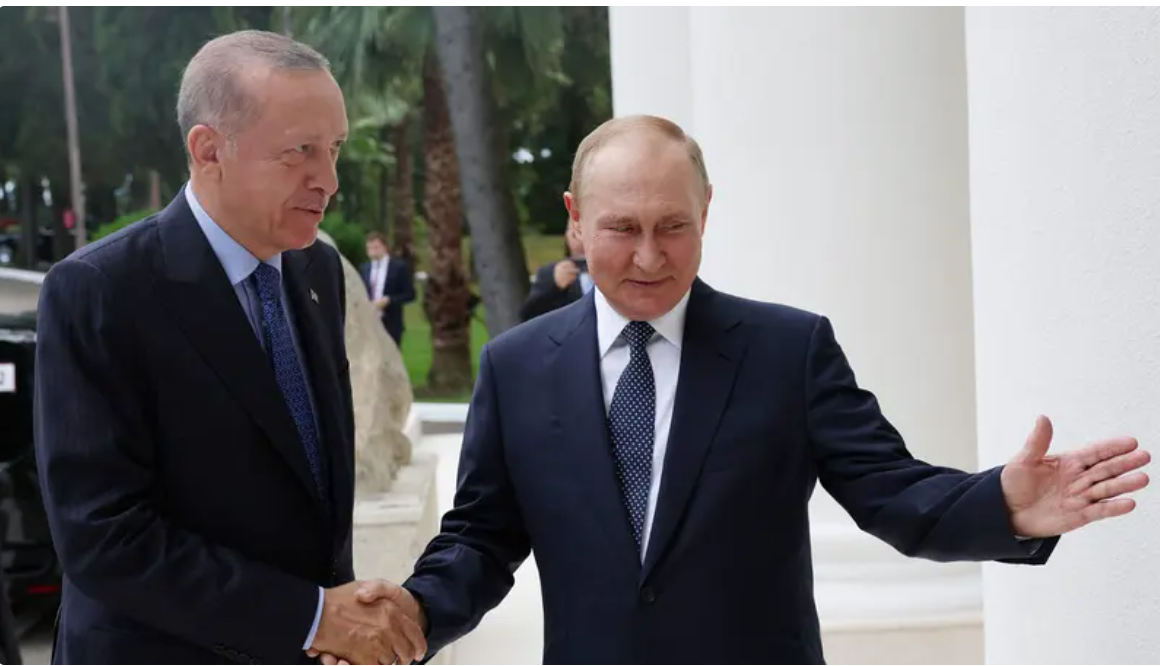 While the war in Ukraine rages on, Turkey is attempting to portray itself as a bridge between Russia and the West. Such a foreign policy may help Ankara achieve some of its geopolitical goals not just in the Black Sea region, but also in the Middle East, as well as in the South Caucasus.

Last week, President Recep Tayyip Erdogan traveled to the Russian resort of Sochi to meet with Vladimir Putin. Only 17 days earlier, the two leaders had met in Tehran, where Erdogan reportedly sought to get the green light from Russia and Iran to launch a “special military operation” in northern Syria. In Sochi, that war-ravaged nation was on the agenda again.

Putin and Erdogan “stressed the key importance of sincere, candid and trustful relations between Russia and Turkey in achieving regional and international stability,” the two presidents said in a joint statement after a four-hour meeting. “The importance of preserving the political unity and territorial integrity of Syria was also stressed.”

Does that mean Turkey will not invade Syria once again, and will give up its ambitions to create a 30-kilometer-deep buffer zone in northern Syria along the Turkish border?

Prior to the meeting, the Kremlin called on Ankara “not to destabilize” Syria, adding that it is very important “not to allow any action that could jeopardize the territorial and political integrity of Syria.” Turkey sees Kurdish militants in northern Syria as a major security threat while Russia backs Syrian President Bashar al-Assad.

But what if Ankara decides to raise the stakes, and attempts to force Moscow to make concessions to Turkey regarding Syria?

For instance, instead of destabilizing Syria, Turkey could indirectly destabilize Moscow’s nominal ally Armenia in the Caucasus region. Recently, Azerbaijan’s restive Nagorno-Karabakh area, where Russia has almost 2,000 peacekeeping troops, was on the brink of escalation.

The Azerbaijani Defense Ministry accused Armenian-backed Nagorno-Karabakh troops of targeting its army positions in the district of Lachin, which is under the supervision of a Russian peacekeeping force. After that, Azerbaijan, which is rich in oil and gas, reportedly took control over several strategic positions in the mountainous region.

Given that Moscow remains preoccupied with Ukraine, it is unlikely that it can help Armenia in case it leads to an escalation in the South Caucasus. Azerbaijan, on the other hand, is firmly backed by Turkey. The two countries established allied relations in 2021, which means that Ankara could use the unresolved Nagorno-Karabakh conflict to put pressure on the Kremlin to turn a blind eye to potential Turkish actions in northern Syria.

From Turkey’s perspective, such a move would perfectly illustrate how weak the Kremlin’s positions in Syria and the South Caucasus have become. At the same time, it would clearly show that Moscow would have a very hard time preserving its influence in both regions.

Indeed, as a result of Russia’s isolation in much of the global arena, Erdogan seems to have the upper hand over Putin, which means that the Russian president might eventually have to make certain concessions to his frenemy.

Erdogan, on the other hand, could use Putin as a source of leverage with the United States. The Turkish president has reportedly said that Putin proposed establishing in Russia a joint factory that would produce military drones.

Kremlin spokesman Dmitry Peskov denied that Putin and Erdogan discussed the drone issue during the Sochi summit, even though he previously said the two leaders would discuss military-technical cooperation.

Whether or not they talked about Bayraktar drones, which have proved so effective in a series of other recent conflicts, Erdogan was probably sending a message to Washington: If you continue opposing our plans to fight the Kurdish-dominated People’s Defense Units (YPG) in northern Syria, we may sell drones to Russia, or build a joint drone-manufacturing company with Moscow.

Such an action, however, would have massive implications for Turkey’s membership in the North Atlantic Treaty Organization, especially given that Ankara’s purchase of the Russian S-400 anti-missile systems in 2019 had a serious impact on its relations with Washington.

That is why Erdogan is unlikely to risk any additional confrontation with the US, and will continue trying to balance Turkey’s alliance with Washington and its economic cooperation with Russia.

Unlike other NATO allies, Ankara has not joined anti-Western sanctions, nor does it intend to stop purchasing Russian energy. Moreover, according to Russian Deputy Prime Minister Alexander Novak, Putin and Erdogan have agreed that Ankara will start making payments for Moscow’s natural gas in rubles.

In addition, despite sanctions, Bloomberg reported that Russia’s state-run nuclear-power giant Rosatom recently transferred “around $5 billion” to a subsidiary in Turkey building the US$20 billion nuclear power plant in the country’s Mersin province. The Akkuyu Nuclear Plant is expected to produce up to 10% of Turkey’s electricity once all four reactors are in operation in 2023.

Even though Ankara remains one of Washington’s most important allies in the Middle East, it will almost certainly preserve a significant autonomy in its foreign policy, and will continue developing pragmatic ties with Russia. Such a Turkish position will allow Moscow to remain an unavoidable regional actor, at least for now.

In the long term, the Kremlin, because of its isolation and a military debacle in Ukraine, could eventually become Turkey’s junior partner in a geopolitical tango that Moscow and Ankara dance from the Middle East, through the Caucasus and the Black Sea region, all the way to Central Asia.

This article was provided by Syndication Bureau, which holds copyright.