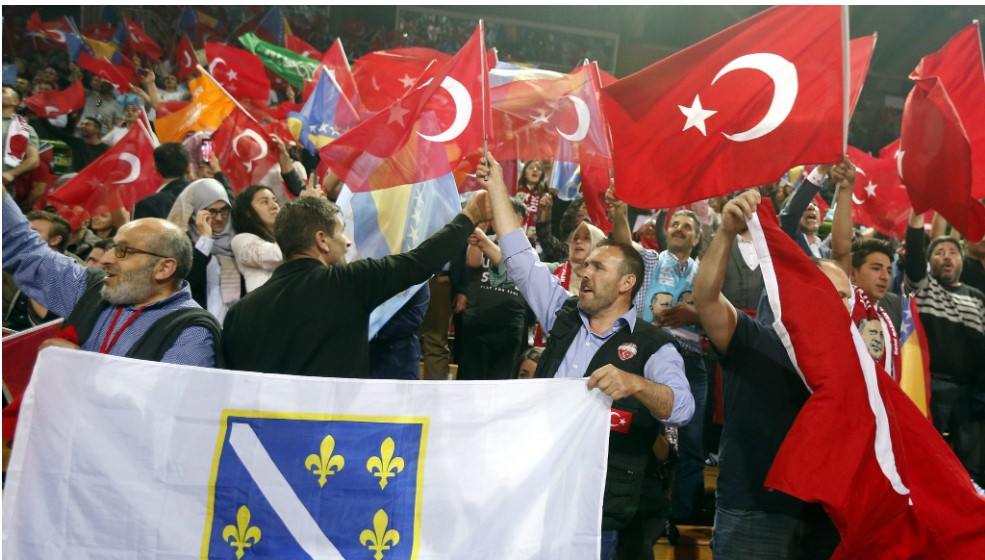 Turkish leader Erdogan making moves in the region while EU is distracted with Ukraine war and energy woes….

The Balkans are often described as Turkey’s gateway to the European Union. But for many years, Turkey, a Balkan state itself, maintained a low geopolitical profile in the region, portraying itself as the patron of Balkan Muslims and little else.

Now, however, with the EU preoccupied fending off an energy crisis amid the war in Ukraine, Turkey is looking to deepen its ties to the region. In turn, Muslims and Christians in Bosnia and Herzegovina, Serbia, and elsewhere are finally seeing Turkey for how it wants to be viewed: as an ascendant, impartial partner.

“I’m not naive and I know that …[Turkish President Recep Tayyip] Erdogan will always be on the side of Muslim-Bosniak interests,” Milorad Dodik, the Serb member of Bosnia-Herzegovina’s joint presidency, said during the Turkish leader’s visit to Sarajevo last week. “But he respects everyone and as long as his policy is like that, I will respect him.”

Erdogan’s visit to Sarajevo was aimed at boosting economic bonds between Turkey and the region, with vows of pushing bilateral trade with Bosnia and Herzegovina to US$1 billion annually, up from $845 million in 2021. One of the outcomes of the trip was passport-free travel between Turkey and Serbia, and Turkey and Bosnia-Herzegovina.

Erdogan also expressed a commitment to becoming more politically involved in the Balkans by helping to mediate a growing constitutional crisis in Bosnia-Herzegovina that came as a result of unresolved rivalries and opposing interests among the three ethnic groups living in the country – Bosniaks, Serbs and Croats.

Bosnia-Herzegovina is still governed under the terms of a 1995 peace treaty known as the Dayton Accords, which divided the country into a Bosniak-Croat entity – called the Federation of Bosnia and Herzegovina – and a majority-Serb entity, called Republika Srpska.

However, it is the EU’s High Representative for Bosnia and Herzegovina, rather than local leaders, who has the final say in the country. While the accords ended the war between the former Yugoslav republics, critics today see this arrangement as de facto neo-colonialism.

Even Erdogan suggested as much last week, when he told journalists in Sarajevo that EU Representative Christian Schmidt was going too far by pushing an amendment to Bosnia and Herzegovina’s federal election law. Schmidt “should not interfere in the process,” Erdogan said.

Although the EU and the United States continue to be the major foreign powers operating in the Balkans, Turkey is seizing opportunities where it can. Erdogan has expressed interest in a trilateral summit with Serbia and Bosnia-Herzegovina.

Back in January, Turkey and Serbia also reportedly agreed to mediate between Bosniak, Croat, and Serb leaders in a bid to end the stalemate in Bosnia-Herzegovina. If talks do take place, possibly in Istanbul, Erdogan will undoubtedly use the summit to maintain Bosnia-Herzegovina territorial integrity.

To be sure, Turkey and Serbia haven’t always seen eye to eye. Turkey was among the first countries to recognize Kosovo’s unilateral independence from Serbia in 2008. But unlike the EU and the US, Turkey never pressured Serbia to recognize Kosovo’s sovereignty, which left the door open for Ankara and Belgrade to strengthen bilateral relations one day.

That day appears to have arrived. More than 1,300 Turkish companies currently operate in Serbia, employing some 8,000 people. Last year, the trade balance between the two countries reached $1.73 billion and Belgrade now hopes to develop military cooperation with Ankara.

For instance, the two countries are expected to hold joint military exercises soon, while Serbia has been interested in purchasing Turkish-made Bayraktar drones since 2020, when the sophisticated weapon proved efficient in conflicts from Libya and Syria to Nagorno-Karabakh.

“We do not hide it …Serbia plans to buy Bayraktar drones,” Serbian President Aleksandar Vucic said during a joint press conference with Erdogan last week. “We know that the whole world wants to buy them, so we are in the line, waiting.”

Turkey’s commitment to regional stability was on display on September 2, when Turkish Foreign Minister Mevlut Cavusoglu addressed the Open Balkan initiative, an economic and political alliance between Albania, North Macedonia, and Serbia. Among the pledges Cavusoglu delivered was a vow to help the bloc address its energy needs this winter.

To the Serbian leadership, Turkish political and economic activities in the country represent a “golden age” of relations between Belgrade and Ankara. “We will take care to maintain our friendship at the highest level, to guard it jealously,” Vucic said.

And yet, given that Serbia has a trade deficit with Turkey – as does every other Balkan nation except Slovenia – it’s actually Ankara that benefits most from its growing economic cooperation in the region.

Still, and while it might not last forever, Turkey is currently presenting itself as a neutral actor, interested in doing business with all sides.

“Our country’s balanced and fair attitude is appreciated by all peoples in this geography,” Erdogan said before his trip last week. “We will continue this stance in the coming period as well.”

Nikola Mikovic is a political analyst in Serbia. His work focuses mostly on the foreign policies of Russia, Belarus, and Ukraine, with special attention on energy and “pipeline politics.”