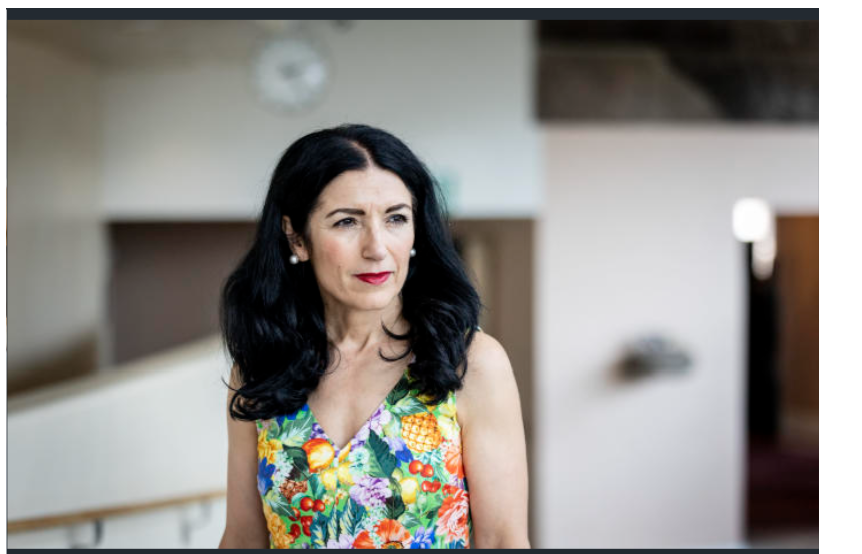 When Turkey’s president rails against “terrorists” in the Swedish Parliament, Amineh Kakabaveh is convinced he is talking about her.

Kakabaveh, a strong advocate for Kurdish self-determination in the Middle East and a fierce critic of Turkish President Recep Tayyip Erdogan, holds extraordinary leverage because the Swedish government depends on her vote for its one-seat majority in Parliament.

“He cannot decide over us,” she says of Erdogan. “I stand up for Sweden’s values and Sweden’s sovereignty.”

To allow the Nordic countries into NATO, a decision that requires unanimity among the alliance’s members, Turkey demanded they lift arms embargoes on Turkey, extradite alleged Kurdish terrorists and stop supporting Kurdish fighters in Syria. Turkey says those fighters are closely linked to PKK, a domestic Kurdish group that Ankara and the West consider a terrorist organization.

Meeting those demands would have been difficult for the Swedes and Finns in any case, but with Sweden’s government dependent on Kavikabeh’s support for its survival, there is little room to negotiate a compromise.

“We are not used to single members of Parliament having such influence,” says Svante Cornell, director of the Institute for Security and Development Policy in Stockholm. “It’s maximal bad luck for the government’s side, you could say.”

The minority government survived a no-confidence vote last week thanks to Kakabaveh and will need her support again on Wednesday to push its spring budget proposal through Parliament.

The unusual situation has raised Kakabaveh’s political profile in Sweden and internationally. It has also exposed her to criticism that she is holding Sweden’s NATO bid hostage to advance her own agenda. Kakabaveh says she has received threats from both Turkish nationalists and Sweden’s far-right fringe.

“It is a terrible situation,” says Kakabaveh, 48. “But I don’t want to sit in a corner and say, ‘I’m scared.’ I left my family, my childhood, everything I had, to stand up for what I believe in.”

Kakabaveh, who grew up in a poor Kurdish home in western Iran, says she was just 13 in the late 1980s when she joined peshmerga fighters rebelling against the Islamic regime of Ayatollah Ruhollah Khomeini.

In her parliamentary office in Stockholm, she showed pictures of her teenage self in the rugged mountains between Iran and Iraq, a Kalashnikov slung over her shoulder.

The rebels fought against the Iranian regime and that of Iraqi President Saddam Hussein, who used chemical weapons against Kurdish villages.

Kakabaveh says many of her comrades and some relatives were killed. She breaks down in tears as she recalls the contrast between her life in Sweden and the hardship she left behind. For years after she arrived in Sweden as a refugee in 1992, the whirr of helicopters made her instinctively want to run for cover.

A socialist, Kakabaveh continued her political activism in Sweden, joining the Left Party and campaigning for gender equality in immigrant communities. Her activism against “honor culture” soon put her at odds with party colleagues who worried her work stigmatized Muslims. After years of tension, she left the party in 2019 and since then serves as an independent lawmaker in the 349-seat Parliament.

The governing Social Democrats in November struck a deal with Kakabaveh to work more closely with Kurdish autonomous authorities in northern Syria, led by the PYD political party. The PYD’s military arm, the YPG, with U.S. support played a key role in the fight against Islamic State militants.

Turkey makes no distinction between the Kurdish groups in Syria and the PKK, or Kurdistan Workers Party, which has led an armed insurgency against the Turkish state since 1984. Tens of thousands of people have been killed in the conflict. The group is considered a terrorist organization in Turkey, Europe and the U.S.

Kakabaveh has called for taking PKK off terror lists, which hasn’t gone unnoticed in Turkey.

“As you know, Sweden at the moment is a country that terror organizations like the PKK, PYD and YPG use as a playground,” Erdogan said in a speech last week. “In fact, there are terrorists even in this country’s parliament.”

Though he didn’t mention her by name, Kakabaveh says he is referring to her.

“For sure,” she says, adding, “I’ve never been a PKK member. I have even criticized them. But on the other hand, I think they have paid a price.”

Kakabaveh says she believes the NATO memberships stalemate will be resolved with a backroom deal between the U.S. and Turkey. If it isn’t, and Sweden is unable to join NATO because of her, Kakabaveh won’t have any regrets. She is against NATO membership anyway, saying it would undermine Sweden’s ability to be a voice for peace in the world.

“I am for disarmament,” she says. “The world needs more peace and diplomacy.”