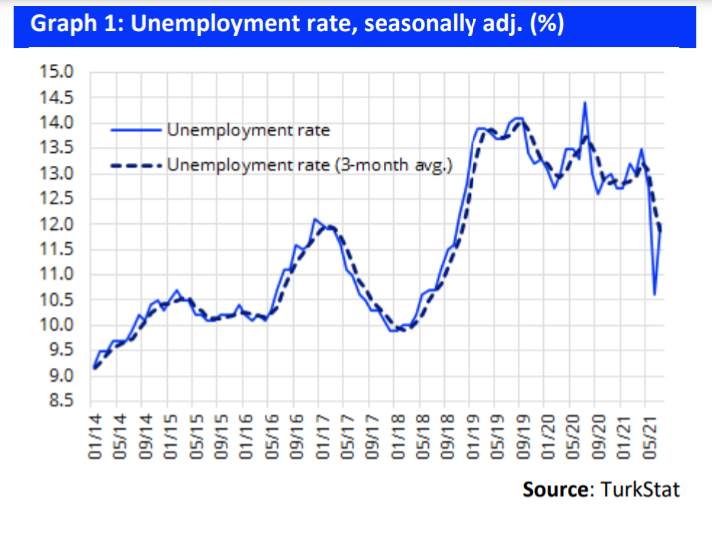 TURKSTAT revealed that the seasonally adjusted unemployment rate, which had decelerated to 10.6% from 13.1% in June, increased to 12.0% in July. Similarly, non-agriculture unemployment rate increased to 13.9% after falling to 12.3% from 15.0% last month. Note that TurkStat started to release employment statistics with a new methodology since January (published as independent monthly estimates instead of quarterly moving averages), which has so far been exposed to extreme volatility. Such volatility is partially due to the significant MoM changes in workforce participation rates (which should actually be rather stable).  As such, we consider that analyzing the labour market statistics on a 3-month moving average (MA) basis would be a more useful approach.

Accordingly, on a 3-mo. MA basis, unemployment rate now stands at 11.8%, down from 13.1% in April. This improvement is mainly due to the ongoing acceleration in economic activity, particularly in the services sector, with the easing of pandemic related restrictions. Yet, the deceleration in workforce participation rate (to 50.7% from 50.9%) has also played some role in this outcome.

Workforce participation should increase considerably over the coming years, which would limit the improvement in the unemployment rate

The workforce participation rate, which had hovered around 53.0%-53.5% throughout 2018 and 2019, actually faced a dramatic decline with the pandemic and fell to below 48% levels. Although it has now risen to about 51%, it is well below pre-pandemic levels, which had been already well below the OECD average of 70-71%. The recently published medium-term program for 2022-2024 foresees a gradual rise in workforce participation rate to 53.6% in 2024. The likely mounting in the workforce in the following years means that a greater number of employment should be generated each year, in order to keep the unemployment rate at plausible levels.

For July, number of employed increased by 454K for the service sectors, but fell by 287K in the industry sector. Yet, the above-mentioned volatility is also intact here (e.g.: there was a 295K rise in the industrial sector employment over the prior month). Focusing on 3-month averages, we see that the lingering employment growth is largely attributable to the services sector and that the trend in the industrial sector has slowed down considerably over the past few months.

For a better understanding of the labour market situation, broad-based unemployment rates would actually be more useful. TurkStat reveals that, when the time-related underemployed workers (eg: ones quitted with unpaid leave) and potential labor force (eg: discouraged workers) are included in calculations, unemployment rate stands at a very high level of 23.6%. Furthermore, if only the potential labor force is included, the unemployment rate would be 19.6% and if only time-related underemployed ones are included, it would be 16.3%