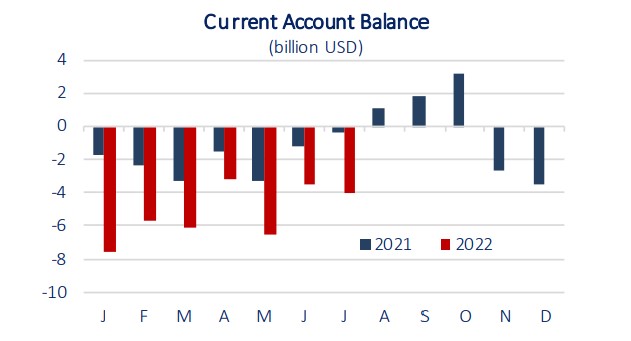 According to balance of payments figures, foreign trade deficit was 9.3 billion USD in July, 6.1 billion USD of which stemmed from net energy imports and 1.7 billion USD of which was net non-monetary gold imports. On the other hand, the positive trend in transportation and tourism revenues significantly limited  the increase in the current account deficit. In July, the total net income from those two items was 6.3 billion USD..

As of the first 7 months of the year, investments in the food sector rose by 339% on an annual basis.

Other investments posted a net capital inflow of 3.4 billion USD.

The  mystery of huge unidentified flows

In July, net capital inflows in other investments was 3.4 billion USD. In this period, Turkish banks’ currency and deposits within their foreign correspondent bank accounts rose by 983 million USD, while non-resident banks’ deposit accounts held within domestic banks increased by 698 million USD in total. In addition, the effective and deposits held by non-residents in Turkish banks went up by 1 billion USD.

Thus, in July, the 12-month cumulative long-term debt rollover ratio was 89% in the banking sector and 178% in other sectors.

Although the deceleration in global economic activity limits the upward pressures to some extent, energy prices remain high due to the increasing supply concerns.

According to the preliminary data released by the Ministry of Trade, the rapid expansion in the foreign trade deficit continued in August. In this period, exports rose by 13.2% on an annual basis, while the imports increased by 40.8% yoy. Thus, the foreign trade deficit, which expanded by 161.8% yoy to 11.3 billion USD in August, reached 73.5 billion USD in the January-August period with an annual  increase of 146.4%.

In the upcoming period, besides energy prices, the course of economic activity in EU countries and the EUR/USD parity will be closely monitored in terms of the current account balance outlook. The positive performance in tourism revenues despite geopolitical developments is expected to continue in the winter months due to the energy crisis in European countries and will continue to support the current account balance.