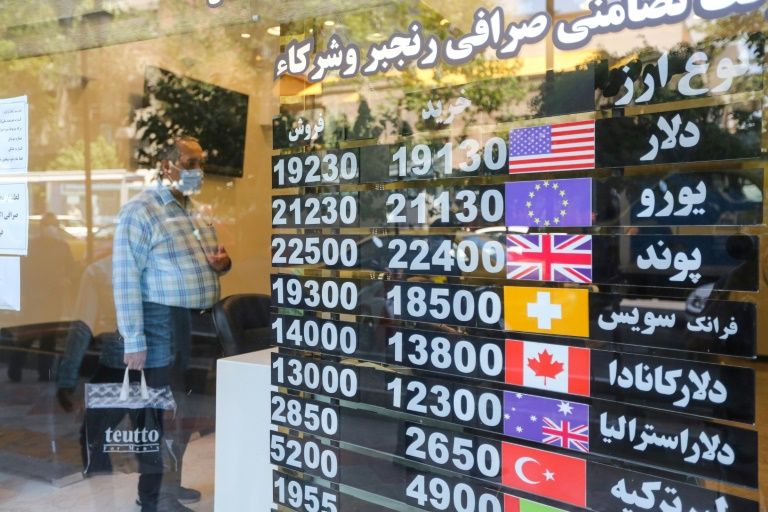 The Iranian rial plunged to new depths against the US dollar on Monday in what economists said was a slump partly induced by the Middle East’s deadliest coronavirus outbreak.  The country is facing a health calamity, as Covid-19 cases proliferate, while the economy is in the midst of deep contractionary spiral, as low energy prices and EU sanctions hurt export earnings.  Iran’s plight is triple-threat to Turkey.

At Tehran’s foreign exchange hub on Ferdowsi Street, the currency was being traded at around 192,800 to the dollar at midday, according to AFP journalists.

The rial has hit rock bottom in the past month, collapsing even below the 190,000 rate it fell to in the wake of the US decision in 2018 to withdraw from the Iran nuclear deal and reimpose sanctions.

The street was busier around government-owned exchanges, as people formed long queues to take advantage of a central bank scheme offering discount rates.

One of those standing in line was a 30-year-old physiotherapist planning to emigrate to Australia.

“The more I work, the less dollars I can buy,” she said, only giving her name as Niki.

“This has affected my welfare, made me more stressed. It’s a bad situation,” she said as she eyed a digital board displaying the latest rates in red.

Iran’s already fragile and sanction-hit economy started deteriorating after it reported its first coronavirus cases on February 19, and it has since struggled to contain the outbreak.

US sanctions reimposed in 2018 mainly targeted Iran’s oil sales lifeline, prompting the Islamic republic to focus on its manufacturing sector with exports mostly aimed at its neighbours.

Iran earned just $8.9 billion from the sale of oil and related products in the year to March, down from a peak of $119 billion less than a decade ago, according to Mohammad Bagher Nobakht, the head of planning and budget organisation.

Coupled with the lower revenues, the coronavirus pandemic led to a temporary shutdown of the economy, border closures and a halt in non-oil shipments.

“The main cause of the current crisis is the coronavirus,” said economist Saeed Laylaz, who has acted as an adviser to Iranian presidents.

“Our non-oil exports have virtually stopped, particularly to neighbouring countries” due to the COVID-19 outbreak, he noted in a phone interview.

That takes the overall toll to over 9,742 dead out of more than 207,500 cases in the outbreak, with official figures showing an upward trajectory in new cases of infection since early May.

But the rial’s sharp decline was “not unpredictable”, said Laylaz, given the considerable growth of liquidity which leads to rising inflation.

The economist said the forex market turmoil had led to “increasing social and political pressure on the government”.

According to Yaser Shariat, a market analyst heading a stock brokerage, the rial’s troubles may “continue until the epidemic is brought under control” and borders are reopened.

Most of Iran’s border crossings with its neighbours remain closed, save for few at Iraq’s Kurdistan region, according to Iranian authorities.

Non-energy trade between Turkey and Iran declined by 75% YoY as of May, reports Financial Tribune. Iran exported $289.1 million worth of goods to Turkey during the four months, indicating an 86.05% decline year-on-year.

In 2019 1.7 million Iranian tourists vacationed in Turkey, but this year it is doubtful many will arrive, as incomes are sharply down, and many Turkish hotels may have reservations to accept guests from a country still ravaged by coronavirus.

The biggest threat is illegal migration from Iran to Turkey’s Eastern provinces, where Covid cases suddenly began to soar. The province of Van reported 14K illegal migrants who were apprehended and sent back. It is not known how many escaped police scrutiny.  But, some experts surmise the new outbreaks are partly caused by illegal migration, second only after the arrival of citizens from large cities.