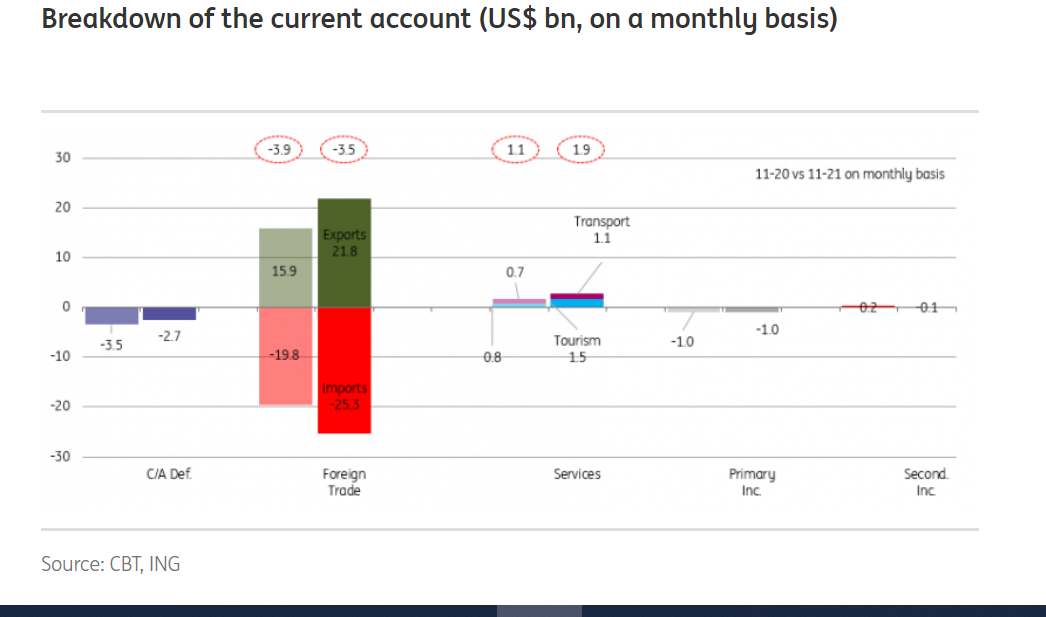 Despite higher energy bills, the current account deficit has continued to narrow on a 12-month rolling basis amid robust exports, contracting gold imports and a recovery in the services balance…

The current account balance, which recorded significant surpluses in the previous three months, fell into deficit at US$-2.7bn in November, but the deficit has narrowed on a 12 month rolling basis, at US$-14.3bn (translating into c. 1.8% of GDP), a trend that has continued since early 2021. A quick glance at the November data points to a relatively strong recovery in the services balance (on the back of higher transportation and tourism revenues) and a narrower deficit in the goods balance (thanks mainly to relatively strong exports despite a higher energy bill).

The capital and financial account, on the other hand, was barely positive at US$1.1bn driven mainly by resident outflows. Including higher net errors & omissions at US$4.5bn, the monthly c/a deficit and capital account inflows, official reserves recorded a US$2.8bn increase.

In the breakdown of monthly flows, we saw continuing asset acquisitions by residents amounting to US$3.0bn driven by trade credits extended to foreign counterparties. For the non-residents, US$4.1 bn inflows were attributable to i) US$3.0bn trade credits, ii) US$1.3bn deposits placed by foreign investors to Turkish banks iii) US$0.9bn gross FDI iv) US$0.9bn inflows to Turkish equities. On the flip side, a US$1.4bn Eurobond repayment by the Treasury limited foreign inflows.

The current account deficit has continued to narrow in recent months from its cyclical trough in February, at US$-36.9bn driven mainly by robust exports, contracting gold imports and a continuing recovery in tourism revenues, notwithstanding the higher energy deficit. Given the adjustment in the exchange rate, with repercussions on domestic demand and imports, the current account is likely to remain on this path in the period ahead, also with the support of higher tourism revenues despite energy imports moving to record highs.

On the financing side, significant reliance on net errors & omissions and weakening registered flows show increasing challenges that will likely continue this year with an increasing focus to roll-overs.