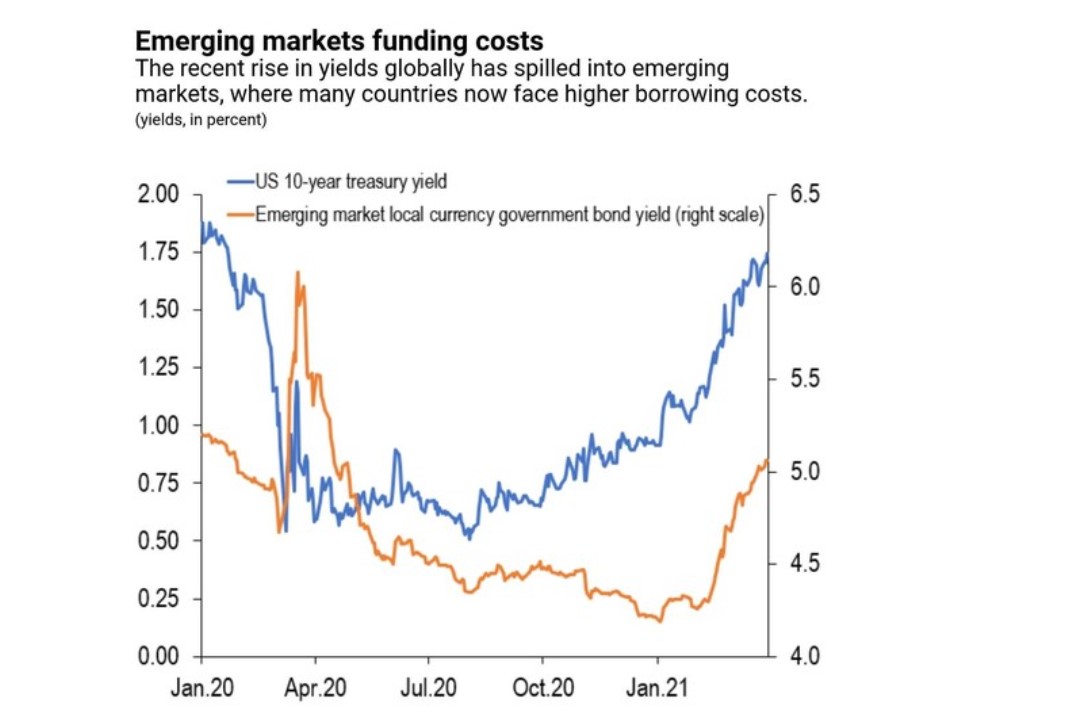 After enduring a tumultuous 2020, the global economy is finally emerging from the worst phases of the COVID-19 pandemic, albeit with prospects diverging starkly across regions and countries—and only after a “lost year” spent in suspended animation. The economic trauma would have been much worse if the global economy had not been supported by the unprecedented policy actions taken by central banks and by the fiscal measures implemented by governments.

Global markets are watching the current rise of US long-term interest rates, worried that a rapid and persistent increase may result in tighter financial conditions, potentially hurting growth prospects. Since August 2020, the yield on the US 10-year Treasury note has risen by 1¼ percentage points to around 1¾ percent in early April 2021, returning close to its pre-pandemic level of early 2020.

The good news is that the rising rates in the United States have been spurred in part by improving vaccination prospects and strengthening growth and inflation. Both nominal and real interest rates have risen, although nominal yields have risen more, suggesting that market-implied inflation—the difference between yields on nominal and inflation-indexed Treasury securities—is recovering. Allowing a modest amount of inflation has been an intended objective of easy monetary policy.

The bad news is that the increase may reflect uncertainty about the future path of monetary policy and possibly investor concerns about the increased supply of Treasury debt to finance the fiscal expansion in the United States, as reflected by sharply rising term premia (investors’ compensation for interest-rate risk). Market participants are beginning to focus on the timing of the Federal Reserve’s tapering of its asset purchases, which could push long-term rates and funding costs higher, thereby fueling a tightening of financial conditions, especially if associated with a decline in risk assets’ prices.

While government bond yields have also risen somewhat in countries in Europe and elsewhere, albeit less so than in the United States, the greatest concern comes from emerging markets, where investor risk appetite may shift quickly. With many of those countries confronting large external financing needs, a sudden sharp tightening in global financial conditions could threaten their post-pandemic recovery. The recent volatility in portfolio flows to emerging markets is a reminder of the fragility of these flows.

Meeting the needs of tomorrow

While several emerging market economies have adequate international reserves, and external imbalances are generally less pronounced as a result of the large import compression, some emerging market economies may face challenges in the future, especially if inflation rises and borrowing costs continue to grow. Emerging market local currency yields have risen meaningfully, driven importantly by an increase in term premia. Our estimate is that a 100 basis point rise in US term premia is associated, on average, with a 60 basis point rise in emerging market term premia. Many emerging markets have sizeable financing needs this year, so they are exposed to the risk of higher rates once they refinance debt and fund large fiscal deficits in the months ahead. Countries that are in weaker economic positions, for example owing to limited access to vaccines, may also face portfolio outflows. For many frontier market economies, access to funding remains a primary concern given limited access to bond markets.

As countries adjust policies to overcome the pandemic, major central banks will need to carefully communicate their policy plans to prevent excess volatility in financial markets. Emerging markets may need to consider policy measures to address excessive tightening of domestic financial conditions. But they will have to be mindful of policy interactions and their own economic and financial conditions, as they make use of monetary, fiscal, macroprudential, capital-flow management, and foreign-exchange intervention.

Continuing policy support remains necessary, but targeted measures are also needed to address vulnerabilities and to protect the economic recovery. Policymakers should support balance-sheet repair—for example, by strengthening the management of nonperforming assets. Rebuilding buffers in emerging markets should be a policy priority to prepare for a possible repricing of risk and a potential reversal of capital flows.

As the world begins to turn the page on the COVID-19 pandemic, policymakers will continue to be tested by an asynchronous and divergent recovery, a widening gap between rich and poor, and increased financing needs amid constrained budgets. The Fund remains ready to support its member nations’ policy efforts in the uncertain period ahead.

Tobias Adrian is the Financial Counsellor and Director of the IMF’s Monetary and Capital Markets Department.