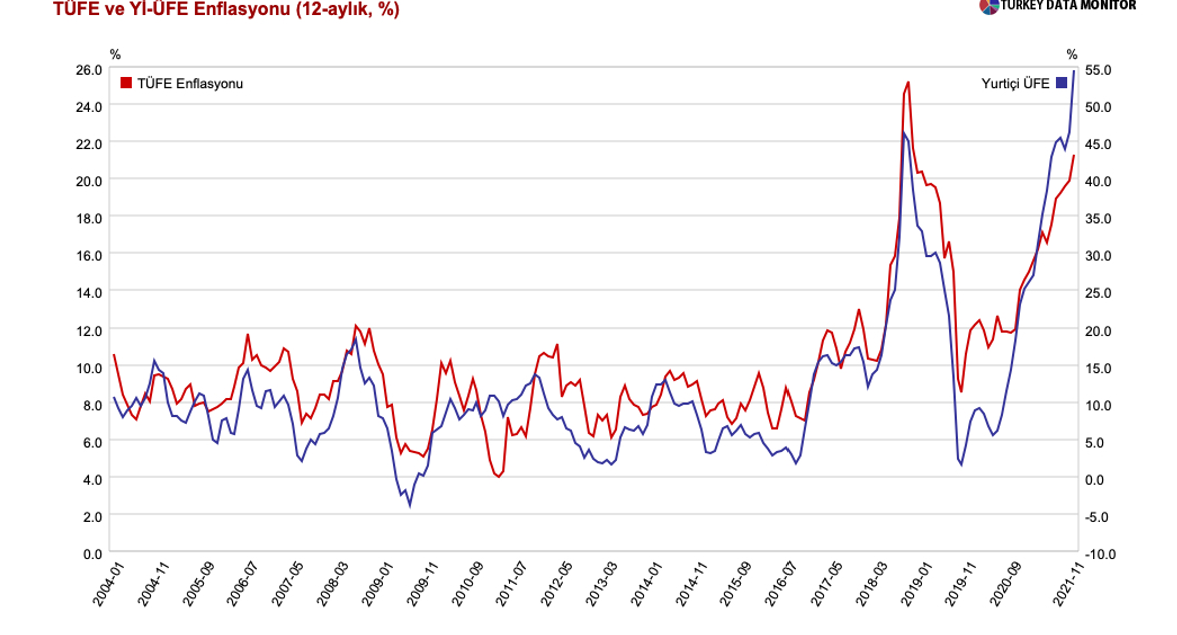 CPI inflation exceeds expectations and rises to 21.3% in November

CPI inflation exceeds expectations and rises to 21.3% in November. TurkStat revealed November CPI inflation at 3.51%, which is above our 2.85% estimate and the 3.0% median market expectation. With this result, YoY CPI inflation still increased to 21.3% from 19.9%. On the other hand, core inflation (group C) was 2.8% MoM, leading to a rise to to 17.6% from 16.8% in YoY terms. The weakening in TL and energy price hikes for industrial and commercial users directly reflected into D-PPI inflation, which was registered at 9.99% MoM, leading to a further rise in YoY terms to 54.6% from 46.3%.

Food inflation seems to be the major component behind the deviation in our estimate. The deviation in our estimate seems mainly attributable to food inflation, which turned out to be 3.9% vs. our 2.0% projection, while core inflation was broadly in line with our expectation. Energy inflation on at 6.0% MoM was also a tad above our expectation. Services inflation was rather high at 1.88%, leading to a significant increase in YoY terms to 16.9% from 15.4%. We believe that services inflation may exceed 20% in the upcoming period. Durable goods inflation and other core goods inflation (largely consists of semi-durables and fast consumer products) stood at respective 4.1% and 4.3%, both as a reflection of the weakening TL.

CPI inflation may exceed 30% within a few months’ time

CPI inflation may exceed 30% within a few months’ time unless the currency retreats to previous levels. The FX passthrough is in fact yet rather limited, which we expect to be reflected into CPI inflation to a much greater extent in the coming months. There are also significant energy (electricity and natural gas) price hikes, likely to be reflected from January onwards. As such, with the currency exchange rate levels, we expect CPI inflation to rise above 30% in a few months’ time. Yet, we should note that predicting inflation is actually a futile effort before seeing at what levels the currency would stabilize. For December, we are likely to witness a MoM CPI inflation of around 4.0%, which would bring the YoY inflation to 24.5-25.0% for end-2021.

CBRT maintains its stance and signals one last rate cut in December after a (temporary) pause in 1H2. At the investor meeting held yesterday, CBRT Governor Kavcioglu reiterated the same message conveyed after the 18-Nov MPC meeting that the CBRT would consider to complete the use of the “limited room” (for rate cuts), implied by the so-called transitory factors on inflation.

Kavcioglu added that they will observe the cumulative effects of our current monetary policy stance in the first half of 2022. Market interprets these messages as a signal to (temporarily) pause the rate cut cycle in January after one last gradual rate cut in December.

Note that USD/TL rate was around 10.50 levels during the previous MPC meeting when the CBRT said that there was (still) a limited room for further rate cuts. The fact that the CBRT maintains its stance exactly the same despite about a 30% rise in the parity suggests to us that it expects a substantial correction in the currency very soon (probably towards 10.0-10.50 for USD/TL), also considering that it continues to say that recent currency developments are detached from economic fundamentals. CBRT Governor also believes that price hikes will not translate into inflation, which also reflects the Bank’s belief that price hikes will be reversed as the currency retreats to previous levels. Accordingly, the CBRT might be required to reconsider its stance if we don’t see a major currency correction in the upcoming days.