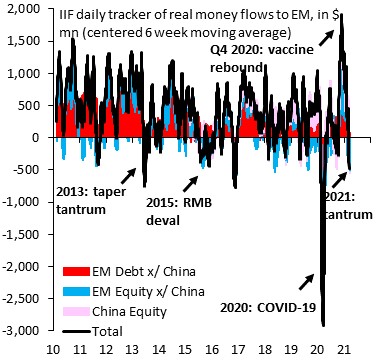 All market participants are nervously eyeing Wednesday’s Fed FOMC meeting, but one group of asset managers are about to panic.  These are Emerging Markets fund managers, who are already seeing the writing on the wall, trimming positions.  According  to IIF, financial flows already reversed in EM, with chief economist Robin Brooks calling the recent turbulence in US government bond market a second taper tantrum.  Predictions suggest Fed will not resort to yield control, which could result in 10 year bond yields inching up to 2%.  As inflation rises across the Developing World, the combination of higher long rates and a stronger dollar could poison the party.

“It’s a shock to see EM outflows so soon after 2020. The good news is it’s all about the US bond market sell-off & Fed speak. In other words, it’s contained & fixable. The bad news is that things need to get worse for the Fed to change its messaging to slow rising US bond yields”, tweets Robin Brooks.

He continues the barrage with  “Fed QE is running at a pace of 5% of GDP in 2021, while the fiscal deficit will be at least 15%, leaving a 10 percentage point funding gap. So the bond market sell-off isn’t just about “overheating.” It’s about how high yields must go to make US debt an attractive investment…”

Now, that is the question—how high? But, it is useful to pose another one:  Could the Dollar Index weaken, when US bond yields are pulling away rapidly from the rets of the world?

The answer to first question in my view is qualitative, rather than quantitate:  Unless Fed starts yield control, US long bond yields shall continue to rise until investors become convinced that the upcoming tsunami of inflation is transitory. I’ve no evidence to suggest that inflation is becoming entrenched, hence I’ll go with Fed on that—the jump in inflation will be transitory. But, it will take investors at least through June to verify that preposition with data. That is when hopefully US, as well China and most of EU will reach herd immunity.

Until then, the sky is the limit for 10 and 30 year bond yields.  There is no reason to assume that this formerly strait-laced market is immune to excesses experienced in other risky assets.

Regarding dollar strength, economic theory says that  a nation with higher current account and budget deficits vis-a-vis their trading partners ought to see its currency depreciating. No doubt about that. Solid as rock. But it ignores financial flows.  In a world where investors are losing money each day holding negative yielding fixed income assets, they’ll be forced to switch to US bonds, thus lifting the currency.

Ex-China and a few very-well managed EMs, this scenario is  scary to the point of being lethal.  Thanks to rising energy, transportation, metals and food prices, inflation is becoming a problem in several Developing Nations, which by itself limits the maneuvering room of the monetary authority. Now, with investors pulling their funds out of the EM financial markets, Central Banks will have to tighten prematurely, starting with Russia, Brazil, Indonesia and of course Turkey.

On the fiscal side, investors must closely monitor the US junk bond market to divine the future of EM sovereigns. That market is, too, becoming nervous.  If US junk bonds suffer significant spread widening, EM high-grades will follow suit.

Did you get the picture?  Fed FOMC is tasked to defend the economic interests of US, but de facto it is the Central Banker to the world. If it doesn’t mind bond yields going up, the whole world will follow in its footsteps, abandoning risky EMS and fleeing to the glowing security of now high-yielding US bonds.