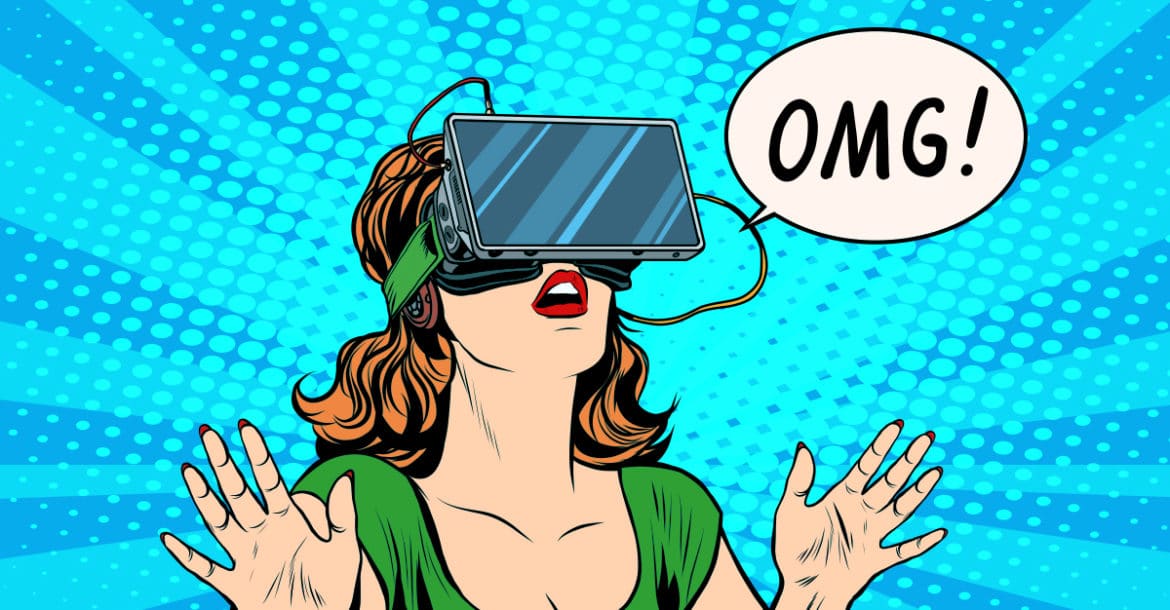 As per the official figures Turkey’s 2Q21 GDP Growth was 21.7%.  The 10.4% contraction in the same quarter last year which is the base effect is the main reason for the extraordinary growth performance while the announced figure is within the scope of the expectations.   In fact looking at the growth performances of other countries with the same base effect, Turkey’s 21.7% growth is not an outlier.

But what needs to be monitored in the growth data is how the government’s pandemic support last year shaped the GDP details.  Whether it was broad based and hence could be viewed as sustainable or whether the growth was focused to a few areas requiring policy adjustment for sustainability.  For the manufacturing industry and services sector (tourism within it) have been thrown in very different directions. In parallel with the spread of the disease, it was the low-income parts of society that struggled the most with unemployment and rising inflation.  The basis and prevalence of growth is important in this respect.

To eliminate the base efet, looking at quarter-to-quarter growth contains more information about the main trend.

1Q21’s q-q 2.2% growth has slowed to 0.9% in the second quarter pointing at a strong low of momentum. As evident from the increase in food prices, production on the agricultural side in 2Q21 returned to a contraction of 1.8% from 2.3% growth in the previous quarter.  Turkey’s industrial sector, which grew by 2.3% in the first quarter, lost almost 50% momentum and posted 1.2% q-q growth in 2Q21.  Moreover, for the manufacturing industry, the 3.3% growth achieved in the first quarter turned into a contraction of 0.8%. The construction sector contracted by 1.5% in the second quarter after growing by 21% in the first quarter. 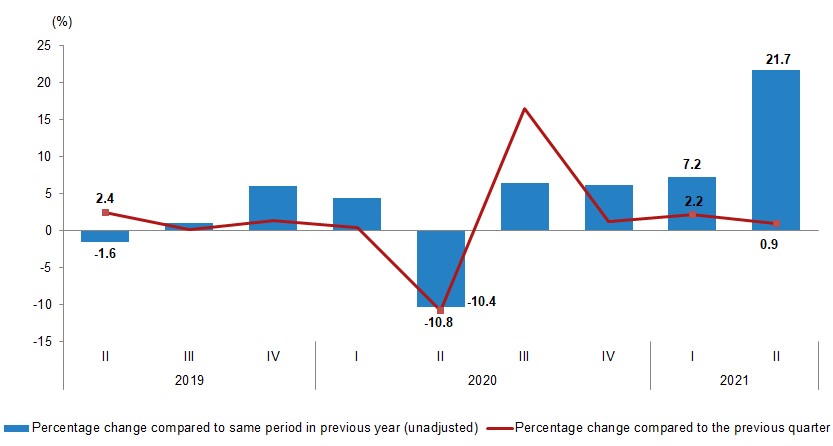 The fortunes were better for the services sector in 2Q21.  Of course, with the easing of pandemic bans and vaccination, the service sector, which achieved 1.1% growth quarter to quarter in 1Q21, recovered its strength in Q2 and captured 2.1% growth compared to the first quarter.  The information and communications sector grew by 4.9% in 1Q21, strengthening further in the second quarter to 6.9%.  Of course, the pandemic period is directly proportional to the changing ways of doing business and shopping.

On the spending side, households who remained timid in the first quarter, shrinking their spending by 0.7% compared to 4Q20, achieved 1.6% growth in their spending in line with the changing pandemic conditions of the second quarter. As can be predicted in advance by monitoring budget data, government spending has left its controlled course (1Q21-0.7%) and engaged to a higher spending cycle in the second quarter of 2021, so that public spending grew by 0.7% in the second quarter of the year. The negative picture is that fixed investments have also lost half the momentum: 1.4% growth in 1Q21 in the second quarter is only 0.7%. Export growth is significant: the 2.8% contraction in 1Q21 grew by 2.2% in 2Q21, especially with the European market relaxed by vaccination. This is a very significant change in the positive direction. It should be noted that the 9.7% contraction in 1Q21 on the import side has rapidly slowed to a contraction of 3.3%.  Domestic demand and the strengthening of exports have obviously started to increase import demand.

If exports are the source of growth, then it is worth looking at the July 2021 foreign trade data released yesterday in terms of whether the current growth dynamics can continue in the quarters ahead.

For one thing, export growth in the January-July period appears to have fallen dramatically from 35% to 10.2% in July. This is a sign that exports are losing significant momentum.  It is necessary to consider where this loss of momentum will end and whether it will recover again.

On the import side, the 25.8% increase recorded in the first seven months slowed to 16.8%, and on this side there is a loss of momentum too; roughly due to the decline in imports of intermediate goods for exports and completion of stockpiling.

However, the foreign trade deficit, which contracted by 4.7% in the first seven months of the year, grew by 51.3%, painting a very bad picture due to the slowdown in exports being above imports.

In short, foreign trade dynamics point to a negative picture in terms of growth.

The table below is the clear answer to this question. The share of the labor force, which was 37% before the pandemic, has fallen to 32.9% on the back of the government’s growth policy preferences.  This makes it very clear why, despite all the “growth”, the public support for the AKP-MHP government is waning in the recently announced election polls. 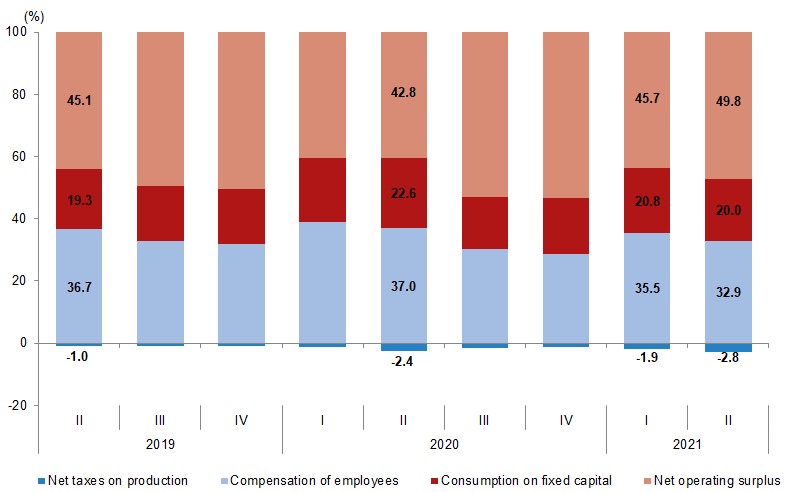 The fact that growth is increasingly based on exports and exports have lost momentum according to the July data is actually the main summary of the trend.  Turkey’s economy, which grew by 2.2% in the first quarter and 0.9% in the second quarter, will return to negative growth in the third quarter and possibly in the fourth quarter as well. The main reason for this is that the contribution of net exports has turned negative.

The increase in the number of delta variant related diseases at the beginning of September and the difficulties experienced on the tourism side indicate that the second quarter performance on the services side will not continue, especially in the last quarter.

Agricultural production is in trouble with drought and cost increases.  It’s hard to change the picture in the second half of the year.

The rest is household, public and investment expenditures.  The increase in consumer loans in recent weeks and Erdogan’s desire to cut interest rates indicate that the growth is shifting to domestic consumption and that a controlled continuation of this trend is desired by the government. Exports should not be expected to ease further and growth will likely remain in double-digits for the remainder of 2021 because demand in foreign markets, particularly in the EU, is strong.  Supply chain problems have the potential to cause problems on the foreign trade side.

A significant jump from private sector investments should not be expected; but there’s no reason for it to turn negative.  As we have elections ahead, public spending will surely escalate.

Therefore, second quarter growth of 21.7% and growth of 7.2% in the first quarter appears enough to secure GDP growth at around 8% by the end of the year.

The quarter-to-quarter comparison has fallen from 2.2% to 0.9%, increasing the potential for negative growth for the rest of the year.  In particular, 3Q21 is almost certain to be negative compared to 2Q21.

For 2022 when early elections are likely, what we have at hand is a GDP growth prospect at around 3.5% following 8-9% growth in 2021.  This explains President Erdogan’s desire to slash the policy rate immaturely.

However, the fact that Turkey’s impoverished households have fallen victim to rising inflation during the AKP government’s efforts to increase exports via weaker exchange rate means that Erdogan will have a hard time achieving the result he expects from 2022 growth. That is why further debt restructuring schemes, early interest rate cuts and who knows what further stimulus measures should be expected in the coming two quarters in the Turkish economy.