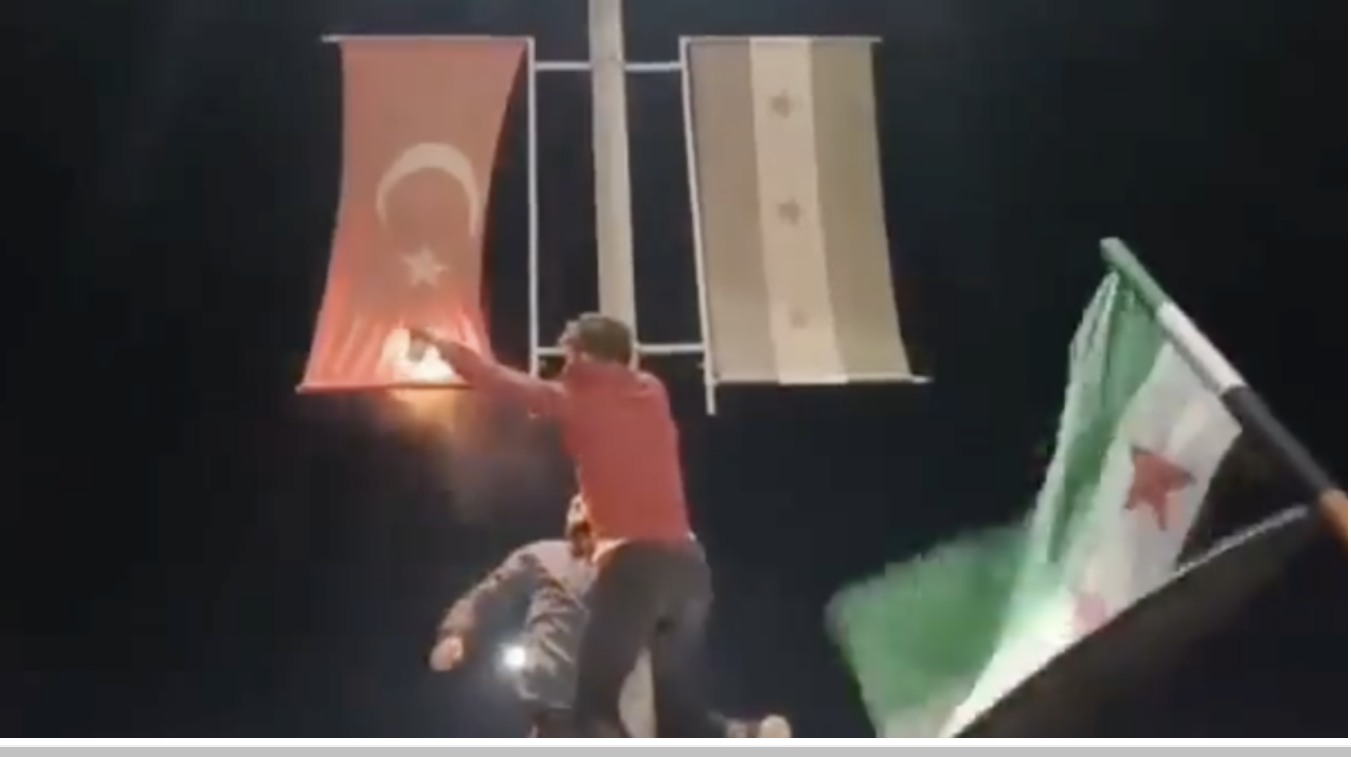 Though this stance by Ankara is not new in principle, Cavusoglu’s remarks were interpreted by some as a betrayal of the Syrian opposition after years of Turkish support.

Since Syria’s civil war broke out following an anti-Assad uprising in 2011, Turkey has been the main backer of the opposition.

Turkey has also long negotiated on the international stage on behalf of Syrian factions opposed to Assad and has supported armed groups while bringing parts of northern Syria under Turkish and Turkish-backed opposition control through cross-border military operations.

In the protest Friday outside a Turkish military post in the northwestern Syrian town of Mastoumeh, demonstrators chanted that the “Turkish army is a traitor” and that “Syrian people are not for sale.”

“We don’t want to reconcile with the killer of children,” read a placard carried by a Syrian boy in Mastoumeh, a reference to Assad.

There were also reports of overnight protests in the northern Syrian towns of Azaz, al-Bab, Afrin, Tel Abyad as well as Idlib, which is the last-remaining rebel-held area.

The Syrian Observatory for Human Rights said angry protesters in the town of Azaz stormed security headquarters and then marched to the local council building where they brought down the Turkish flag and burned it.

In Azaz, protesters sprayed graffiti on the walls, reading, “Down with Turkey and down with the regime!” while others carried posters denouncing Cavusoglu.

There were calls for the removal of all Turkish flags from the northern parts of Syria, the Observatory said.

In his remarks, Cavusoglu also stated that Turkey has had no diplomatic contacts with Syria since their ties were severed in 2012, but added that in 2021, he had an informal conversation with his Syrian counterpart, Faisal Mekdad, on the sidelines of a Non-Aligned Movement summit in Belgrade, Serbia.

“We have to somehow reconcile the opposition and the Syrian regime. Otherwise there can be no lasting peace,” Cavusoglu said Thursday.

His remarks followed a question on whether Turkish President Recep Tayyip Erdogan might speak with Assad soon. Cavusoglu said Russian President Vladimir Putin has for years urged the two leaders to speak and that Erdogan has preferred the two countries’ intelligence services communicate with one another — which they have done on and off, and have now resumed.

On Friday, the foreign ministry published a statement reaffirming its support of the Syrian opposition and saying that Turkey has worked hard to find a solution for Syria’s conflict “in line with the legitimate aspirations of the Syrian people.”

Ankara’s sudden policy change regarding Syria after a decade of hostility towards Assad and $30 bn spent on hosting Syrian refugees, which excludes the expenditures made to sustain Free Syrian Army, the umbrella name for pro-Turkish Syrian rebels. The policy change seems to be motivated by Putin, who according to Turkish researcher Aydin Selcen, suggested financial aid from Russia to cash strapped Treasury will be linked to reconciliation with Assad regime.

Renown Turkish foreign policy columnist Zeynep Gurcanlı suggests a much more selfish reason:  Ankara may have curtailed monthly payments to Syrian rebels, as part of an overall effort to save ammunition in the Treasury for the upcoming elections.

Can Erdogan and Assad make up?

After investing 11 years into Assad hostility and having built a massive infrastructure in Syria to achieve this goal, a sudden change in the direction is nearly impossible.

Ankara will not leave Syria to the regime or to Kurdish-led forces, Turkish interior minister Suleyman Soylu said Friday after a suggestion by his colleague that Damascus and the Syrian opposition should reconcile sparked outrage.

Soylu said Turkey, a major backer of some Syrian opposition forces, would not abandon Syria to the regime or to the Kurdish-led forces whose main component Ankara considers to be a terror organisation.

“We have not and will not leave the people who are [reeling] from the oppression of the Syrian regime and the Kurdish units alone,” the interior minister said.

“Our solidarity with the Syrian people will continue,” the statement said.

These statements  highlight Ankara’s dilemma in the matter of Syria-for-cash. Additionally, it is not clear why Assad would want to reach a deal with the Erdogan regime now, when main opposition party CHP, too, promises to establish contact with him. Traditionally isolationist in diplomacy towards Arab nations, CHP leader Kilicdaroglu will probably offer Assad better terms for withdrawing Turkey’s military support to rebels.