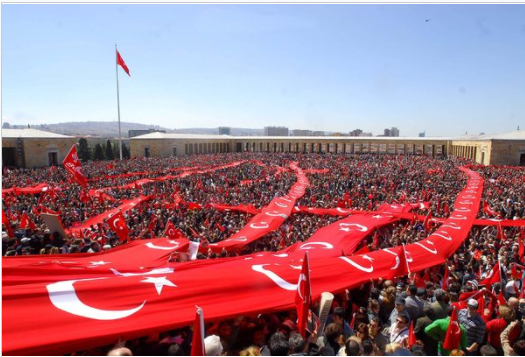 If the opposition wins the next election, Turkey will be dragged into chaos, President and Justice and Development Party (AKP) Chair Recep Tayyip Erdoğan has asserted.

Speaking at his party’s parliamentary group meeting today (November 17), Erdoğan said the main opposition Republican People’s Party (CHP) is “playing a game that will be harmful to our country.”

The country’s next presidential and parliamentary elections are due to be held in June 2023. The ruling party has dismissed the opposition’s calls for a snap election as polls show that the AKP has been consistently losing votes.

“They take along a so-called nationalist party … and the party controlled by the separatist organization with them,” he remarked, referring to the İYİ (Good) Party, the CHP’s allies, and the Peoples’ Democratic Party (HDP), which he often accuses of being linked to the outlawed Kurdistan Workers’ Party (PKK).

“Those who guide the CHP are playing a game that is seemingly beneficial for them but is also equally harmful to our country,” Erdoğan said.

“If they win, Turkey will be dragged into chaos with an uncertain end. We don’t say this, history does.

“The chain of coups d’état that hung Menderes [Adnan, former PM] and sent this country’s young people to gallows say this.

“The political and economic crises of the 1970s and the 1990s that inflicted heavy costs on this country say this.

“High-level figures of the PKK and mouthpieces of the FETÖ [“Fetullahist Terrorist Organization”] say this. Even their own MPs say this.

“Don’t worry, they won’t succeed because Turkey is not the old Turkey. Our nation is aware of what is happening.

“When our nation goes to the polling stations in June 2023, they will look at our works and these dark powers. In the face of such a picture, everyone will turn to the AK Party and the People’s Alliance.” (AS/VK)