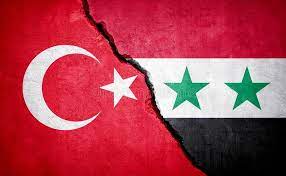 President Recep Tayyip Erdogan has become the latest top Turkish official to call for better ties with Syria, as Ankara appears to shift its stance on the government of Bashar al-Assad.

“We need to achieve forward steps with Syria. With these steps we will spoil many games in the region,” Erdogan told reporters in remarks carried by national TV channels over the weekend. “Political dialogue or diplomacy cannot be cut off between states.”

Turkey was a staunch supporter of Syrian rebels during the height of the country’s long war, regularly condemning Assad for the actions of his troops.

With backing from Russia and Iran, though, Assad’s government has regained control of much of Syria. That’s left Turkey to largely focus on Kurdish militants in northern Syria it sees as a threat for their links to the PKK, which has been fighting for autonomy on Turkish soil for decades and is designated a terrorist group by the European Union and US.

Earlier in August, Erdogan traveled to Sochi for talks with Russian leader Vladimir Putin, apparently seeking his blessing for another cross-border offensive targeting the Kurdish People’s Defense Units, or YPG. After the meeting, Erdogan told reporters that Putin had urged Ankara to solve its problems with Damascus.

On Friday, the Turkish leader suggested he wasn’t backing down from his willingness to again strike across the frontier. “We might come suddenly one night,” Erdogan said, a phrase he uses when referring to imminent military operations.

Oytun Orhan, a Syria specialist at the Ankara-based Center for Middle Eastern Studies, said any imminent breakthrough in ties with Assad was unlikely as the two administrations have competing security priorities.

Damascus wants Turkey to end support for its remaining Syrian opponents, Orhan said. Turkey, meanwhile, is determined to dismantle Kurdish self-governance in Syria, and in the past has mobilized Syrian rebels to fight against the YPG.

“My expectation is for intelligence contacts to become more frequent and for talks to eventually evolve to the political dimension,” Orhan said in an interview.