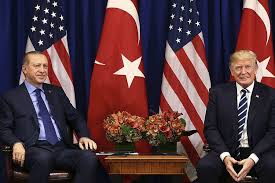 Is there hope for improvement in the US-Turkey relationship?  Erdogan now thinks so, which by itself is a ground-breaking revelation from the Turkish President, who is known to engage in long rants about evil foreign plots to topple him and US’ help for “PKK in Syria”.  “To be honest, after our conversation tonight, a new era can begin between the United States and Turkey,” Mr. Erdogan said during a television interview afterward on Monday.

Erdogan is happy because Trump allegedly stood by his nation’s  side in the Libyan conflict, which pro-Turkey GNA seems to be winning.  But, there are other reasons for Erdogan’s praise of Trump.

In recent months, Mr. Trump has not stood in the way of and even assisted Turkey’s interventions in both Syria and Libya. He thanked Turkey for freeing an American evangelical pastor, even though diplomats accused Turkey of political hostage taking. And the F.B.I. has opened a budding investigation into Mr. Erdogan’s bête noire, the Islamic preacher Fethullah Gulen, whom he accuses of masterminding a failed coup in 2016 from his self-imposed exile in Pennsylvania, reports New York Times.

Equally important, Mr. Trump has held off imposing sanctions against Turkey for its purchase of a Russian S-400 missile system, something that has prevented Turkey drifting further away from the West, said Asli Aydintasbas, a senior fellow at the European Council on Foreign Relations.

“He saved this relationship,” she said of Mr. Trump. “If not for this strange Trump factor, we really would have been in a Turkey-Russian axis.”

Erdogan’s call with Trump came despite Turkish officials’ sharp criticism over the killing by police of Floyd on May 25. In the call, Erdogan told Trump Turkey was saddened by the “inhumane” and “racist” killing of the unarmed man that set off the large-scale protests. Turkey has also “condemned” the US response over the heavy-handed police tactics that targeted Turkish journalists covering the protests. The comment elicited incredulity from critics of Turkey’s own record on press freedom that has made it the world’s biggest jailer of journalists. Two more journalists were detained this week in an espionage probe centered around the Turkish military’s role in Libya, reports al Monitor.

“Trump and Erdogan are … looking to protect their strongman image during the pandemic, and clearly share similar ideas about how to deal with protests. But it is coming at the cost of unity within their respective nations,” wrote journalist Sebnem Arsu in The Independent.

Trump is also blocking efforts by the Congress to sanction Turkey for the purchase of Russian made S-400 anti-missile systems.  In return, Erdogan indefinitely postponed the activation of the missile batteries, taking a load off of Trump’s shoulders.

It remains to be seen whether signs of rapprochement are tactical, or herald a new era, indeed. It is quite  possible Ankara may have realized that it’s interest clash with that Russia in Caucasus, Syria and Libya, while thanks to the slump in NG prices, it is less reliant on Russian gas.

On the other hand, Erdogan badly  needs financial aid, but is too proud to knock on IMF’s door. What could cement a better relationship could be a Fed or Treasury swap loan.  Finally, the extremely cozy relationship between Trump and Erdogan could complicate Turkey-US relations, if Joe Biden wins the November presidential race.