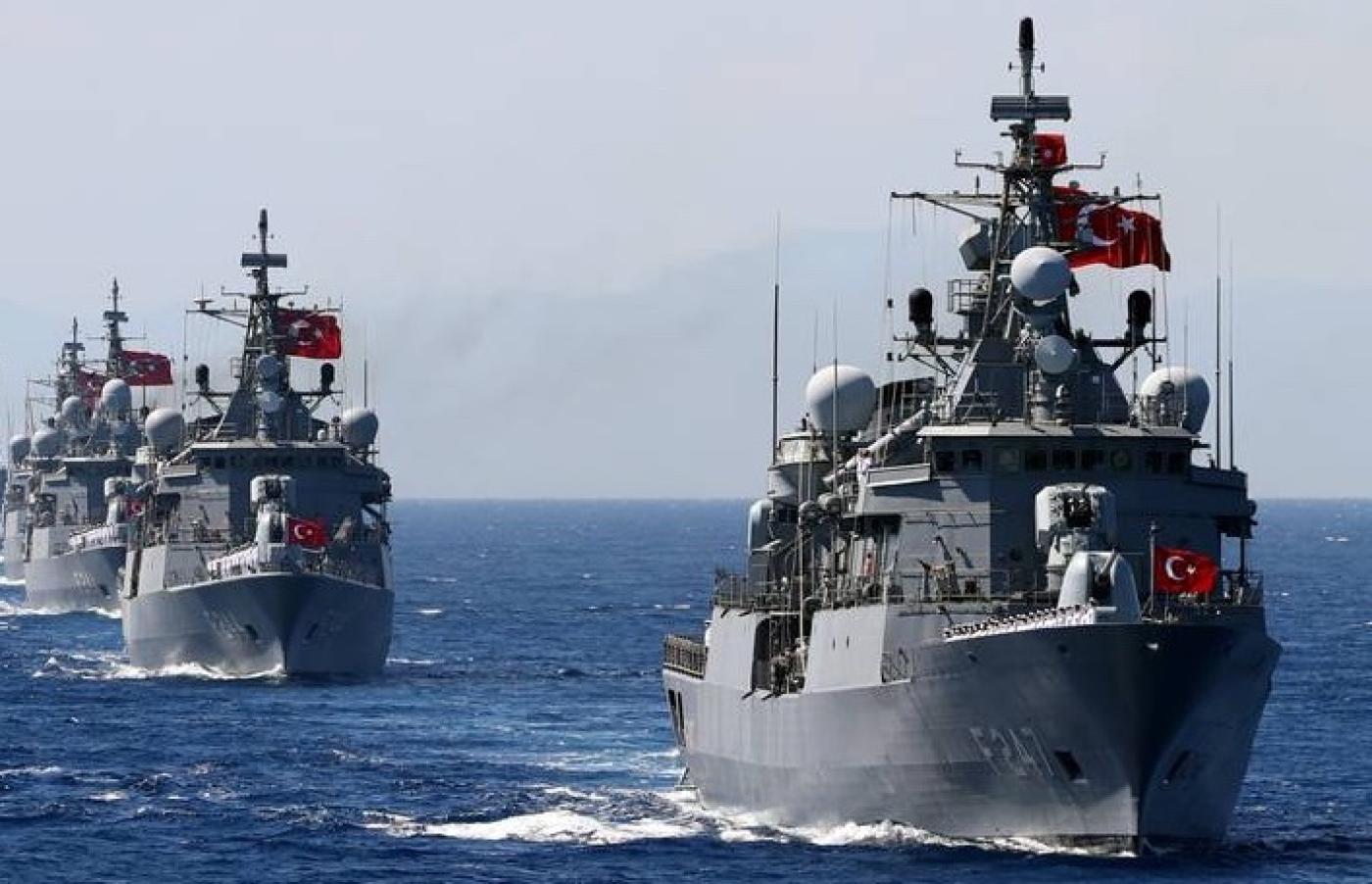 Tensions in the Eastern Mediterranean ratcheted up to new highs after Turkey signed a “preliminary deal” with Libya’s Tripoli-based government allowing for oil and gas exploration in a contested maritime zone.

“It is indeed an escalation,” a diplomat with knowledge of the matter told Middle East Eye on condition of anonymity.

“If Turkey tries to send drilling ships south of the island of Crete, it will be very serious for the region and its stability,” the official added.

The agreement, just one of several in a memorandum of understanding (MOU) on economic issues signed on Monday by Turkish Foreign Minister Mevlut Cavusoglu and his Libyan counterpart Najla Mangoush in Tripoli, the capital of Libya’s internationally recognised government, is a culmination of years-long efforts by Ankara to establish itself in the Eastern Mediterranean.

In 2019, Turkey struck a maritime accord with the former Tripoli-based Government of National Accord (GNA).

Analysts and diplomats warn that two years later the new deal signed between Libya and Turkey risks inflaming an already combustible environment in the Mediterranean.

“Some can argue that Turkey’s first maritime deal with Libya in 2019 was the beginning of these tensions in the Eastern Mediterranean,” Ioannis Grigoriadis, head of the Turkey programme at the Hellenic Foundation for European and Foreign Policy, told MEE.

The 2019 deal ignored Greece’s claims to exclusive economic zones, valid under international law, via the islands of Rhodes, Kastellorizo, and Crete – a strategically important island of 650,000 people that is also home to Greek and US military bases.

In a rebuke to the Turkey-Libya agreement, nine months later Greece signed its own deal with Egypt demarcating their maritime borders.

In 2020, Turkey provided the Libyan UN-recognised government with arms, advisers and Syrian mercenaries to stave off a military assault by renegade field marshal Khalifa Haftar, who was backed by Russia, the UAE and Egypt.

The foray provided Turkey with a rare win amid its regional isolation. While Ankara has remained a central backer of the Tripoli-based government of Abdul Hamid Dbeibah, analysts say Erdogan has been unable to leverage his successful projection of power into tangible gains.

A series of infrastructure projects promised by Dbeibah during a high-profile visit to Ankara last year have yet to materialise.

“Turkey always wanted to go into Libya with the intention of obtaining billions of dollars in contracts,” Jalel Harchaoui, a Libya specialist and associate fellow at the Royal United Services Institute, told MEE.

“[But] Turkey has no reason to be particularly happy with Dbeibah in terms of what his 18 months in power have delivered for economic rewards.”

The effort was critical to helping Dbeibah push back against Fathi Bashagha, former GNA interior minister turned rival prime minister. Bashagha was voted in as Dbeibah’s replacement by Libya’s eastern-based parliament last year and supported by Haftar. He has tried several times, unsuccessfully, to unseat Dbeibah.

Dbeibah came to office in a power-sharing arrangement brokered by the UN with a mandate to organise the country for elections at the end of last year. The vote was cancelled by his government because of disagreements over the electoral laws and the inclusion of contentious candidates like Haftar, and Dbeibah himself, who pledged not to run.

“Bashagha appears to be a spent force,” a diplomat in the region told MEE. “Dbeibah has emerged stronger and has shown no intention of wanting to hold elections.”

With Dbeibah looking to cling to power and Bashagha sidelined, Harchaoui said Turkey likely saw an opportunity to press ahead with its goal of implementing the 2019 maritime deal.

“Turkey is effectively coming to Libya and saying ‘wake up’. This was not a friendly visit,” he said. “Dbeibah has to show he is a good boy and can give Turkey the pieces of paper it is demanding.”

This summer, in what analysts have deemed unprecedented language for a Turkish leader, President Recep Tayyip Erdogan accused Athens of “occupying” Aegean islands that have been part of Greece since WWI. He also made a thinly veiled invasion threat against his neighbour, saying Turkey “could come suddenly one night”.

For its part, Turkey has fumed at Greece for trying to scuttle its plans to purchase F-16 fighter jets from the US. It has also accused its arch-rival of locking onto one of its aircraft with an S-300 missile system and breaking its commitments under international law to demilitarise some Aegean islands.

Greece denied locking onto the aircraft and claims that its military presence on the islands is necessary to defend against superior numbers of troops stationed on Turkey’s mainland.

Amid the war in Ukraine, Washington has tried to straddle the concerns of both its Nato allies.

Greek Prime Minister Kyriakos Mitsotakis was warmly received by both Republican and Democratic lawmakers during his May visit to Washington.

However, in a sign of the growing challenges to this approach, the Libyan-Turkish agreement was signed less than 24 hours after US National Security Advisor Jake Sullivan made an unannounced visit to Istanbul.

While the main purpose of the trip was to bolster Nato unity, a White House readout of Sullivan’s meeting with Erdogan’s chief adviser and spokesperson, Ibrahim Kalin, said the two also discussed the “importance of dialogue and diplomacy” to resolve issues in the Eastern Mediterranean.

“Turkey moved on this even though they knew it would irritate Greece. The timing shows there is no concern in Turkey over the consequences of raising tensions with Greece,” Grigoriadis said.

Few expect relations to improve in the short term. Both Greece and Turkey are holding elections in 2023, which could exacerbate the tensions.

‘If Turkey tries to send drilling ships south of the island of Crete, it will be very serious for the region’

Turkey’s economy has been battered by an economic crisis, with inflation shooting above 80 percent. And while Erdogan has moved to patch up strained ties with regional states such as Israel and the UAE, he has generally doubled down on his rhetoric against Greece, a stance which Grigoriadis says is shared by his main political rivals.

“The opposition has been trying to prevent a shift in attention from the economy to foreign policy by beating out the government on nationalism. This [agreement] will push the opposition to take an even more nationalistic position to be on the safe side,” he said.

Politics aside, some analysts say that the Libyan-Turkey deal has been a long time in the making.

Ankara has chaffed at what it considers to be the unfairness of Greece’s Aegean islands confining its coastline, the largest in the region. Indeed, the issue is one that has generally united parties across Turkey’s otherwise polarised political scene. Turkey’s main opposition party, the CHP, backed the 2019 maritime deal with Libya.

“This is part of Turkey’s broader East Med policy, which feels boxed-in by old adversaries Athens and Nicosia aligning with Israel and Egypt,” Soner Cagaptay, director of the Turkish research programme at the Washington Institute for Near East Policy, told MEE.

“The way it looks for Ankara is that not a day goes by without these countries entering into new arrangements always excluding Turkey,” he added.

In response to the agreement, the European Union reiterated its opposition to the 2019 Turkey-Libya accord, stating: “[The MOU] infringes upon the sovereign rights of third states, does not comply with the Law of the Sea and cannot produce any legal consequences for third states.”

Turkey’s top diplomat, Mevlut Cavusoglu, brushed off the criticism, saying: “It does not matter what they think….Third countries do not have the right to interfere.” He defended the deal as a model of “win-win” cooperation between “two sovereign countries”.

Today, the government in Tripoli is one of Turkey’s only partners in the region.

Recently, Greece and Cyprus have both forged closer ties with Israel, in a diplomatic shift that in some ways has mirrored the economic and political changes driven by Israel’s normalisation with Arab states. Turkey was once Israel’s main Muslim-majority partner in the region.

Athens and Nicosia have also deepened their historic ties to Cairo. Egypt, Israel, Greece, Cyprus, Italy, and  Jordan established the East Mediterranean Gas Forum in 2020 to promote energy projects and keep in check the muscular foreign policy of Erdogan’s Turkey.

Those close ties were on full display Monday when Greek Foreign Minister Nikos Dendias called his Egyptian counterpart, Sameh Shoukry, to consult on the Libyan-Turkish agreement.

An Egyptian readout of the call said both sides stressed that Libya’s government didn’t have the “authority” to conclude the MOU. In a Twitter post, Dendias said Greece and Egypt challenged the “legitimacy” of the deal.

While details of the MOU have not been made public, diplomats and analysts tell MEE the next stage will be to see if Turkey actually dispatches exploration vessels into waters south of Crete and begins drilling in territory disputed with Greece.

News of the agreement has already prompted some in Athens to call for a tougher line against Turkey.

“Greece’s tendency to solutions that don’t include military power have created an image that it is not willing to use its military might, eroding its deterrence credibility with Turkey,” Zacharias Michas, director of studies at the Institute for Security and Defence Analysis in Athens, told MEE

Michas said Monday’s agreement was likely to push Greece and Turkey one step closer to conflict. The two came close in 2020 when their battleships collided.

The closest they have come to war in recent memory was in 1996 over an uninhabited Aegean island, which prompted high-level US intervention to diffuse the crisis.

“I believe Greece and Turkey are on track for conflict,” Michas said. “The actual possibility of a military confrontation is the only way to secure the serious intervention of the United States if they really want to avoid such a scenario to occur.”