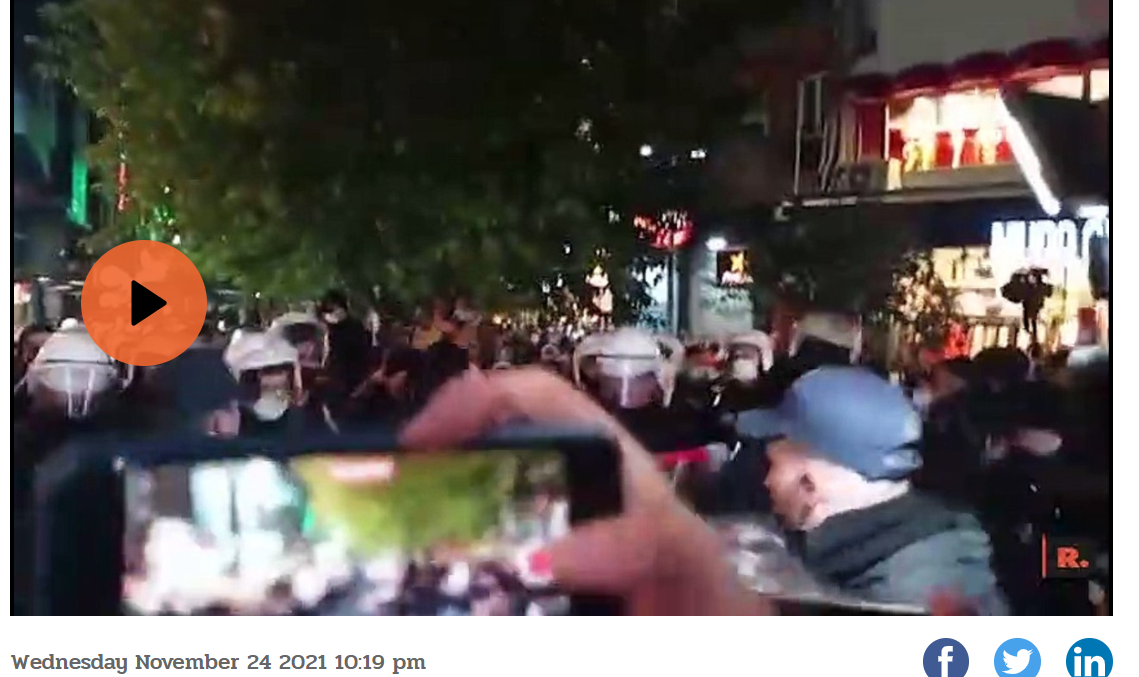 Several people who took to the streets calling on President Recep Tayyip Erdoğan’s government to resign faced police resistance and were detained on Nov. 24.

This is the second night of protests, which had sprung up in 10 different cities, apparently, impromptu, on Tuesday night.

Protests were held in Istanbul’s districts of Kadıköy, Şişli, Bakırköy, Avcılar and Beylikdüzü for a second day in a row, in the face of the lira’s historic crash and soaring prices.

The police attacked protestors who shouted slogans of “Police, get out, these streets are ours” and detained them. They have also attacked journalists for attempting to record the detentions.

Locals supported the protests by banging pots and pans, while the police blocked three main roads in the Kadıköy center.

The Istanbul branch of the Progressive Lawyers’ Association (Çağdaş Hukukçular Derneği – ÇHD) said on Twitter that 55 people had been detained alone in the protests in Kadıköy. It also said that at least eight other protestors have been detained in Şişli.

In Avcılar and Bakırköy, the police told the protestors that the local governor’s offices had banned the demonstrations in the districts for a period of one month.

Protestors gathered in Avcılar upon the call of the Labor and Democracy Platform. They have reacted against the ban on the demonstrations, vowing to stay at the Avcılar Square until they were allowed to proceed with their protest.

In Beylikdüzü on the other hand, at least 10 people have been reportedly detained.

Riot police broke up a protest in Istanbul on Wednesday by demonstrators denouncing the government’s economic policies. Dozens of protesters were detained.

The protesters, mostly members of left-wing groups, were starting to gather in Istanbul’s Kadikoy district, located on the Asian side of the city, when police intervened.

Meral Aksener, the leader of the opposition Good Party, urged Turkish people to stay calm and avoid manipulation after crowds took to the streets on Tuesday night, protesting over the fast-sinking value of the Turkish lira and wider economic crisis.

“It is shameful to bear the government’s lies even for one more day. It is enough. The [ruling Justice and Development Party] AKP is a burden on this country’s shoulders,” Aksener added.