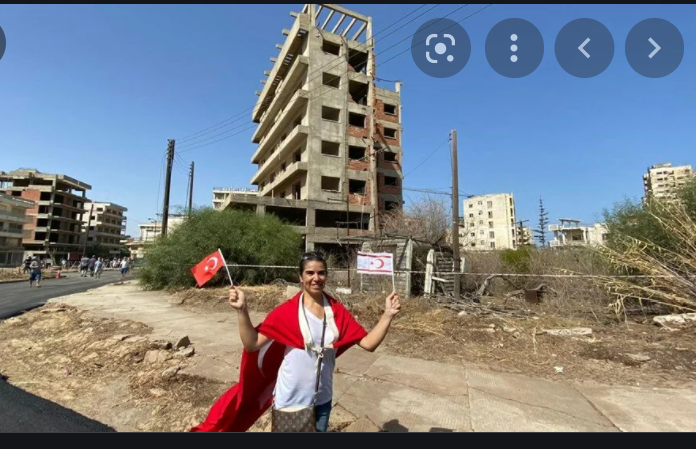 Authorities in the self-declared Turkish Republic of Northern Cyprus announced on Tuesday a partial reopening of an abandoned town for potential resettlement, drawing a strong rebuke from Greek Cypriot and international leaders including the United States.

Varosha, an eerie collection of derelict high-rise hotels and residences, has been deserted since a 1974 war that split the island, a military zone nobody has been allowed to enter.

Northern Cyprus authorities opened a small area for day visits in November 2020, and on Tuesday said a part of it would be converted to civilian use with a mechanism in place for people to potentially reclaim their properties.

“A new era will begin in Maras which will benefit everyone,” said Turkish President Tayyip Erdogan, who was visiting breakaway Northern Cyprus on Tuesday. Maras is the Turkish name for Varosha.

“We don’t have another 50 years to waste,” Erdogan told a crowd at a parade to mark the 47th anniversary of his country’s invasion that divided the Mediterranean island.

According to Turkish daily SABAH, nearly 200,000 guests have already visited the town of Maraş (Varosha), in the northern part of Cyprus, which was partially reopened to the public in 2020 after 47 years, the country’s president said Tuesday.

Turkish Republic of Northern Cyprus (TRNC) President Ersin Tatar told reporters in Turkey’s Mersin province that the reopening of Varosha brought innovation and expansion to the city of Gazimağusa (Famagusta).

The U.S. condemned Turkey’s move to transfer parts of Varosha to Turkish Cypriot control and will urge a strong response from the UN Security Council.

“The step is clearly inconsistent with UN Security Council resolutions that call for Varosha to be administered by the UN” Secretary of State Antony Blinken says in a statement.

The Senate Foreign Relations Committee is holding a hearing on Wednesday to discuss U.S. policy on Turkey, Bloomberg reports.

Turkey and the Turkish Republic of northern Cyprus are tired of endless negotiations in the dispute over the island’s constitutional limbo, which has bene divided since 1974. The Turkish side aims at a two-state solution, with TRNC automatically admitted to EU.