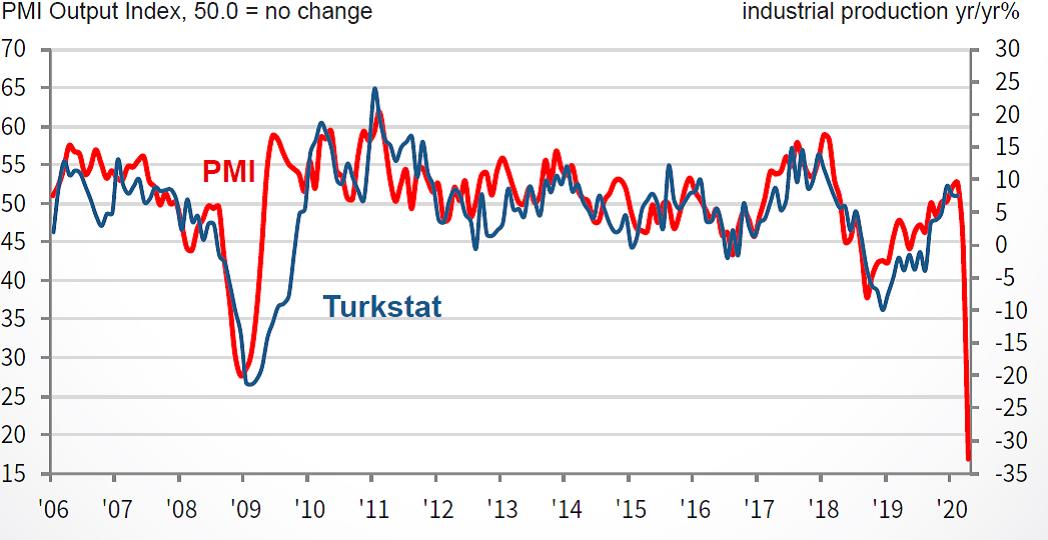 BloombergHT Consumer Confidence Survey showed 7.93 percent drop in April to 65.10 with the details of the index revealing a decline in both the consumer’s perception of the current situation and their future expectations. Thus, the Bloomberg HT Consumer Expectation Index decreased by 1.98 percent mom and weakened to 73.15. Similarly, the Bloomberg HT Consumption Tendency Index, which tries to measure the suitability of the current period for consumer durables and the purchase of automobiles and housing, is at 47.18 as of April with a sharp decline of 21.18 percent.

The final figure of the day was the April PMI which showed 33.4 reading for April diving from the March level of 48.1. The details of the Turkey Manufacturing Sector PMI tell that  output and new orders vanished at unprecedented rates and in response firms scaled back employment and purchasing activities. Firms recorded a steep slowdown in new export orders as the global nature of the pandemic impacted markets around the world. Currency weakness led to upwards pressure on prices, but rates of inflation eased from those seen in March amidst lack of domestic demand. Manufacturers responded to higher input costs by increasing their output prices outweighed by a sizable number of firms offering discounts in an effort to secure orders.

The April foreign trade, inflation, PMI and the consumer confidence results all show how Turkey is getting its share from the coronavirus hit global economy.  As with many others around the world Turkey is sailing through one of the worst quarters seen in its economic history.  One that is worse than the 2008-2009 and 2001-2002 episodes. Thus, 7-8% GDP contraction for 2Q20 would not be a surprise.

Considering the upcoming quarters, hopes are now higher for partial rollback of the measures taken since March starting from June.  Tourism is a lost cause for 2020 while the export demand and domestic demand can only return back to normal a very slow gradual terms.  Thus, for the whole of 2020 Turkey’s economy seems set to contract 3-4% with the outlook for 2021 still blurry.