According to Turkstat findings, with the exception of  propensity to spend on consumer durables, all constituents recorded substantial declines.  The summary of Turkstat report is as follows:

The financial situation of household index at present compared to the past 12 months period which was 61.0 in June decreased by 5.1% and became 57.9 in July.

The financial situation expectation of household index in the next 12 months period which was 82.9 in June decreased by 3.8% and became 79.8 in July.

The general economic situation expectation index in the next 12 months period which was 86.0 in June decreased by 3.3% and became 83.2 in July.

Assessment on spending money on durable goods index realized as 97.0

Assessment on spending money on durable goods index over next 12 months compared to the past 12 months period which was 96.9 in June increased by 0.1% and became 97.0 in July.

In BloombergHT survey, on the other hand, the participants are optimistic about  the current and 12-month hence economic conditions. Propensity to spend on consumer durables recovered by 5/ from very low levels.  Consumers are encouraged by the stability of the TL and intend to spend more, after all restrictions related to Covid-19 had been lifted. (Below BloombergHT consumer confidence chart) 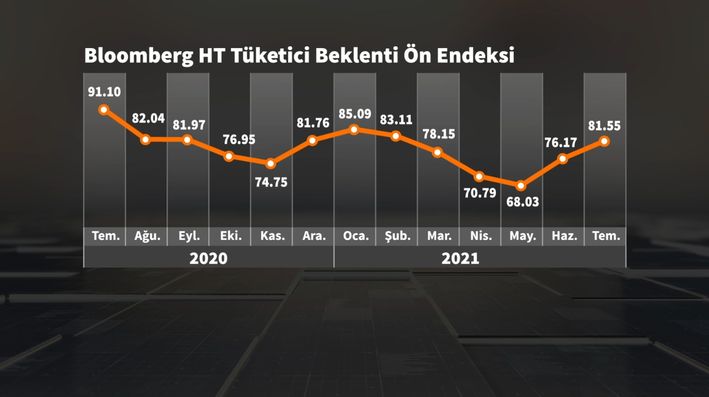 It  is not unusual the two indices temporarily part ways. However, the  opposing views about economic conditions are striking. Which one is more reflective of the reality?

Press reports indicate domestic tourism is doing exceptionally well, but interviews with various Istanbul shopkeepers and merchants reveal that pre-Id (religious holiday) is mediocre.  The consumer has little disposable income left after necessities, while inflation pressures are eating up the purchasing value of the discretionary budget.

According to TEPAV Institute, an Ankara based  independent think-tank, credit card spending displayed an extraordinary 18% jump in June vs the previous month.