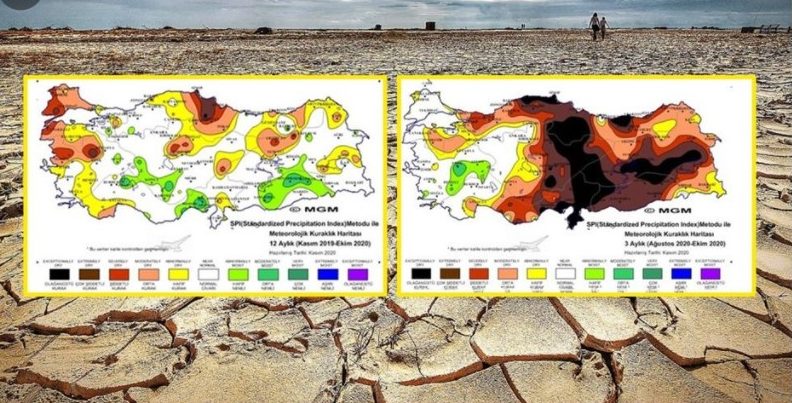 Turkey is experiencing a severe drought as dams around the country’s major cities have reached low levels amid a lack of rain and an unusually warm winter stemming from global climate change.

Murat Kurum, environment, urbanization and climate change minister, warned that “the picture does not give hope”, reports Xinhua news agency

“I reviewed the data from the Meteorological Institute. We had the hottest December in the last 52 years. Rainfall has decreased drastically,” he said.

“The precipitation was drastically low, especially during the past three months, which was at least 50 per cent below the average,” he told Xinhua.

“In January, we foresee that precipitation will remain below average in most parts of Turkey, particularly in the Marmara northwest, Aegean west, and western Black Sea regions,” he said.

Recently, the storage of the dams in different parts of Turkey has decreased, which is 31.65 per cent in Istanbul and 18.18 per cent in the capital city Ankara as of January 10, according to official data.

Problems with the precipitation regime also raise concerns about agriculture.

Representatives of the Chamber of Agriculture and Farmers said that they are worried about yield loss due to the lack of rainfall.

Ahmet Guldal, general manager of the Turkish Products Office, stated that agricultural activities will be seriously damaged if the expected rainfall in the coming months does not come.

Veli Gelen, a farmer from the northwestern province of Eskisehir, said that his livelihood will face hardship because of drought.

“Wheat and barley production will be less than half of what we produced in previous years, and this is mainly because we didn’t have rain nor snow in recent months,” he told Xinhua.

He added that this year’s crop will be the worst in a decade and that his livestock would also be under threat as he uses some of its products as fodder.

Scientists point to the toll of human activity, caused by burning fossil fuels that emit carbon dioxide into the atmosphere, for exacerbating extreme weather events.

“Climate change is one of the most pressing issues affecting the entire world. This is especially true for Turkey due to its location. The Mediterranean Basin is becoming drier due to the effects of climate change,” Adil Tek stressed.