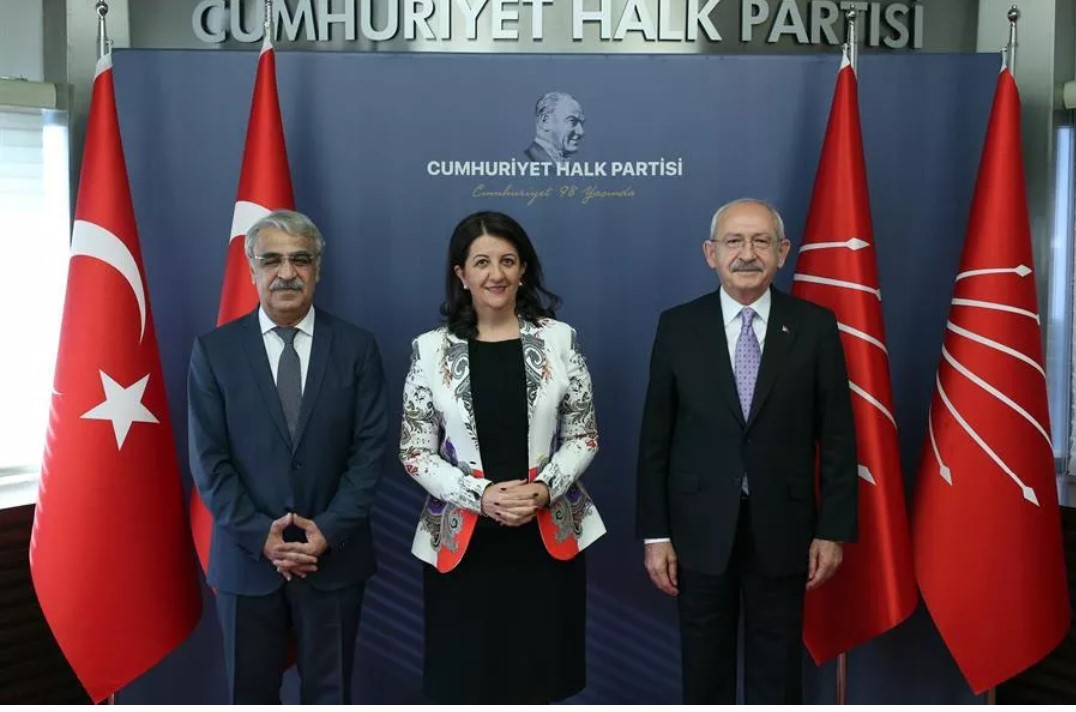 Last week, the opposition alliance has agreed on a 23-page set of proposals for a return to a strengthened parliamentary system and is discussing a common economic policy, which may be adopted by HDP.

While Erdogan and his ally MHP leader Bahceli vehemently deny any notion of early elections,    many pundits have now come around the idea that current policies may be preparation for snap polls as early as June 2022.

“We have discussed the problems of Turkey,” Kilicdaroglu said, stressing that they had both converging and differing views with the HDP. “It was a very useful exchange of views,” he stated.

Kilicdaroglu has worked hard to break the isolation imposed on HDP by AKP-MHP propaganda, which considers the party an extension of terror outfit PKK. AKP-MHP also claim that any entity which associates with HDP is tainted by  terror.

Buldan, for her part, expressed the need for going to the early elections as Turkey is facing multiple crises, including economy, politics, social and judicial. “We are planning to submit a motion to the parliament to push the government for the early polls,” she underlined. The CHP will inform its stance concerning this motion, Buldan informed, underlining that opposition parties should discuss the transition period as well.

Last week, the opposition alliance has agreed on a 23-page set of proposals for a return to a strengthened parliamentary system and is discussing a common economic policy, the chair of the main opposition party has said, informing that the alliance will announce its presidential candidate after the decision for the elections are taken.

“A 23-page document has emerged as a result of the talks between the representatives of six parties. It explains the deficiencies of the current presidential system and details how quickly it should be replaced by the strengthened parliamentary system. It will be made public after all the chairs approve it,” Kemal Kilicdaroglu, the leader of the Republican People’s Party (CHP), said at a meeting with the Ankara bureau chiefs of newspapers on Dec. 27.

The CHP is the biggest component of the Nation Alliance, made up of the İYİ (Good) Party, the Democrat Party and the Felicity Party. Although they are not formal members of the alliance, the Future Party and the Democracy and Progress Party (DEVA) have joined these talks.

“Our fundamental target is to come to power through democratic ways and run the country with the principle of rule of law. We all see that this current system drags Turkey into a disaster,” he suggested, stressing that democracy is the common point of all these six parties.

alliance have developed a very good understanding and a direct dialogue, he said, stressing that although each of these parties have a different opinion on the economy they are now working on a compromised program.

“We have found that our views are not contradictory. They are rather supplementary to each other. There are sure things that we differ in but we have the wisdom to come together and discuss them openly,” he said.

Kilicdaroglu reiterated his criticisms over how the government is trying to run the Turkish economy and accused President Recep Tayyip Erdogan of creating conditions for one of the biggest heists of the Turkish Treasury.

“What we have seen was a heist taken place on a single day. This was organized by Erdogan and his aides. Certain people have benefited from this in an extraordinary way,” he said.

The CHP is submitting a parliamentary motion that involves 11 specific questions for investigating what really happened on the night of Dec. 20 after Erdogan announced some measures that led to a big decrease in the value of foreign currencies.

Kilicdaroglu argued that the Central Bank and the public banks on that night sold $19.1 billion in a bid to revalue the national currency against foreign currencies, saying, “If President Erdogan rejects this figure, he should better support our motion to investigate what happened. But I think he cannot do so.”