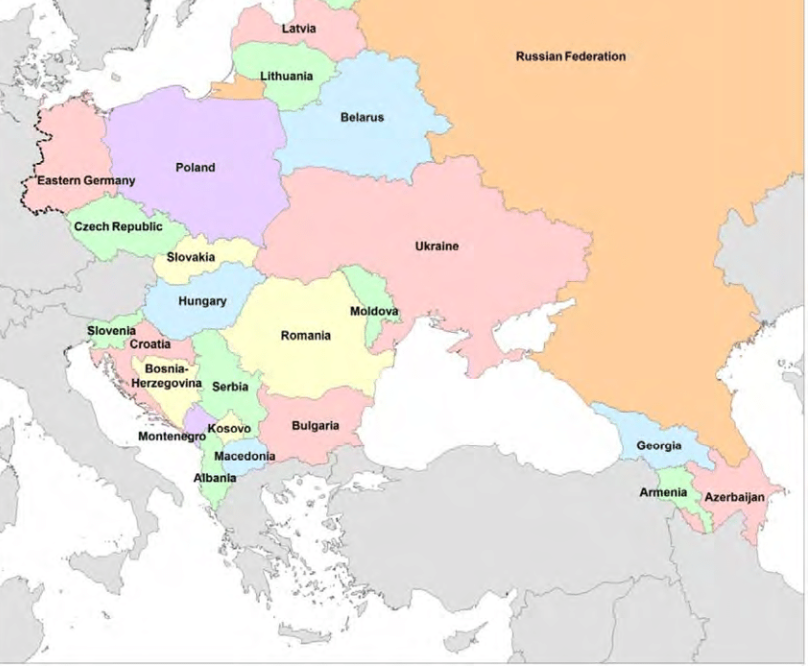 Eastern and central Europe’s normally predictable financial markets are suddenly alive with the most diverse geopolitical and economic risks the region has faced in decades, and international investors are starting to pay attention.  International investors had already abandoned Turkey, the largest economy and financial system in the region.  Economic and political turmoil in the region could jeopardize EU cohesion, as well as  retard normalization after the devastating Covid-19 scourge.

The European Union faces a migrant crisis on its eastern borders the bloc says is being fomented by Belarus, tensions between Ukraine and Russia have flared up again, Brussels is locked in a dispute with the Polish and Hungarian governments over rule of law and democracy, and Romania has no government.

Money managers have long viewed the region as a sort of hybrid – part euro zone satellite bloc with ultra-low interest rates to boot, but also not fully out of Russia’s orbit especially at the fringes.

The latest series of events though, which importantly for market watchers comes against a backdrop of one of the strongest inflation surges since the end of the Cold War and rising COVID-19 cases, has been impossible to compartmentalize.

Hungary’s forint, a 12-year low Polish zloty, Romania’s leu and Russia and Belarus’ roubles are five of the eight worst performing world currencies this month and eastern European stocks are having their worst one in over a year.  Turkey’s Lira is now the weakest currency in the world vis-à-vis the Dollar Index, while her troubles fit in every category CEE suffers from.

Government bonds have been suffering as rising inflation crushes the real-term income they provide. Polish, Hungarian and Romanian bonds now have some of the most negative ‘real yields’ — the interest rate once inflation is factored in — anywhere in the emerging world, even lower than Turkey.

Ukraine’s bonds have slumped 10% as Russian tanks have neared its borders again, while the threat that Western governments might ban banks and funds from owning Russian sovereign debt altogether has hit Moscow’s market.

The conflict between Russia and Ukraine involves Turkey, which insists on selling armed drones to Ukraine, despite Russian warnings to stop it.  On the other hand, in the Belarus crisis Turkey seems to be in the Russian camp, as her flag carrier THY is accused of ferrying refugees from Iraq, Syria and Yemen to Minsk.

“Welcome back to emerging markets,” JPMorgan headlined a report on Wednesday on the growing pressures in the region after the years of relative calm.

Meanwhile NATO Secretary-General Jens Stoltenberg warned Russia on Monday the western military alliance was standing by Ukraine amid what he called a “significant” build-up of Russian troops near the border.

It is not clear how Ankara will react, if NATO decides to sanction Russia, or send arms to Ukraine.

Romania is still trying to cobble together a government while calls for separatism in Bosnia have brought warnings of a return to the ethnic conflicts in the Balkans.

“We have seen an effect across most assets,” said Viktor Szabo, a portfolio manager at investment firm Aberdeen, citing the drops in Ukraine’s hryvnia currency, Russia’s rouble and some of the region’s government bonds.

While the geopolitical tensions have dominated the headlines, UBS’s head of emerging market strategy Manik Narain warns about a sharp deterioration of broader economic fundamentals in CEE.

A rise in imports and supply chain issues in key export sectors like car manufacturing are likely to result in Poland’s first negative trade balance since 2012, Narain said. A long-running row with Brussels about Warsaw overriding parts of EU law could be costly too if it isn’t resolved.

The EU is currently withholding Poland’s 36 billion euro- share ($40.7 billion) of its Covid-19 recovery fund, equivalent to roughly 1% of the country’s GDP. That could jump to 4-4.5% of GDP though if traditional EU development funding, worth more than 120 billion euros over the next six years, is also stopped.

JPMorgan estimates the deterioration in current account positions implies a GDP deficit of 2.3% in Poland, of 1.8% in the Czech Republic and 2.9% in Hungary.

The economic and political shocks could see currencies weakening further and together with this year’s 300% surge in gas prices fuel inflation and force central banks to keep raising rates.

Borrowing costs would have to rise too. Inflation for big three CEE economies – Poland, the Czech Republic and Hungary – currently averages around 6.5%. If it ends up settling between 3-5%, 10-year bond yields in the region would hit 3.9%-5.2% – far higher than in recent years.

“It is difficult to distil the geopolitical tensions from the macroeconomic backdrop,” Dushanova said. “We are probably going to see some rocky times in the region.”

At the end, financial flow could turn negative in 1H2022, forcing even faster tightening or more currency weakness on the region.

The winter covid-19 wave is upon Europe, which is likely to cause contagion t it periphery, forcing lock-downs and social mobility restrictions, which could further undermine social peace, as well dealing an additional blow to regional economies.