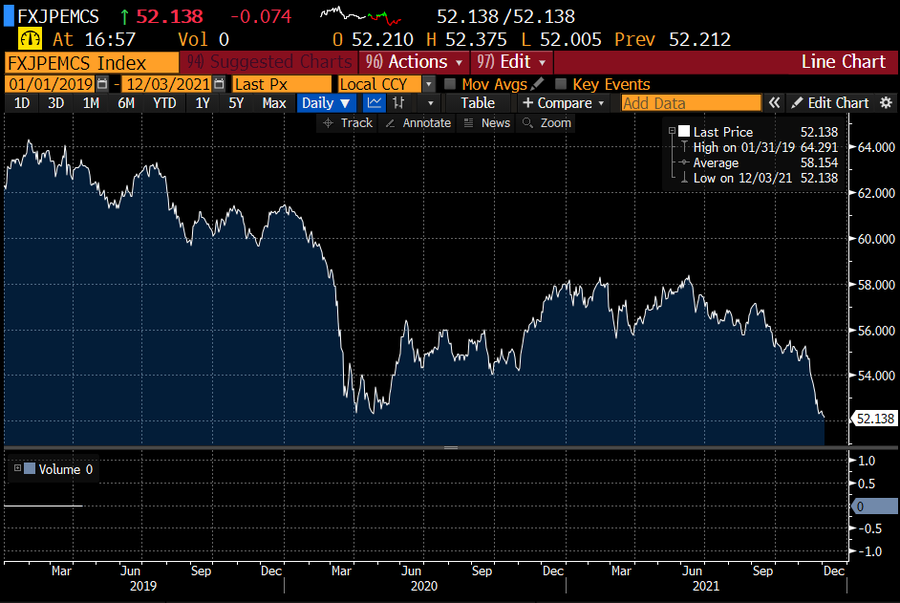 Capital flows to emerging markets not including China suffered a “sudden stop” this quarter according to the Institute of International Finance, setting up some EMs poorly for an expected monetary tightening cycle in developed economies.

Emerging market stocks and currencies retreated on Friday in cautious trade ahead of key U.S. employment data, but were set for strong weekly gains on hopes that the impact of the Omicron coronavirus variant would be limited.   The lira was set to lose about 9.7% this week, following the appointment of a new finance minister and President Tayyip Erdogan’s recommitment to keep interest rates low.

EM on the verge of sudden stop (ex-China)

“Our high-frequency tracking shows flows into non-China EM grinding to a halt this quarter,” said IIF economists, with “important emerging markets” all but acting as closed economies over the past few years. “Emerging market flows have gone into a de facto sudden stop.”

The IIF analysis shows three of the largest EMs as the weakest in terms of inflows over the past three years to shield from the expected outflow of capital that would follow higher U.S. rates.

“Argentina, Brazil and Turkey are all in quasi financial autarky, with inflows in recent years near zero, as foreign investors steer clear of stocks and bonds in these countries,” the IIF said.

“This (inflation) is really increasing the pressure on Turkish authorities to do something. If they wait, give it two or three months, you would be looking at inflation between 25% to 30%,” said Jakob Christensen, chief analyst and head of emerging market research at Danske Bank.

The  IIF report said the large devaluation in the Turkish lira, down nearly 35% against the dollar so far this quarter, and down 46% year-to-date, “is likely to worsen the picture going forward, given that contagion to the rest of EM is possible.”

Argentina’s peso has fallen 17% this year in a controlled slide while Brazil’s real has fallen 8%.

“EM currencies are back to the lows of March 2020, the peak of the COVID sell-off when we were recording big EM outflows. This recovery – if you can call it that – is so different from 2008. Back then EM roared back, fueled by China’s huge infrastructure stimulus. Not this time…” commented  IIF chief economist Robin Brooks in his Twitter account.

“2020 was an awful year for EM currencies and now 2021 looks even worse. The fall in Turkish Lira (TR) stands out, but many LatAm currencies have also taken a pounding, including Chile (CL), Colombia (CO) & Peru (PE). There’s no US taper tantrum, but EM is in a tantrum anyway…, he added in a second Tweet.