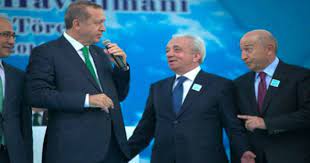 In a Bloomberg analysis written by Asli Kandemir and Cagan Koc, the focus is put on President Erdogan’s rate cut ambitions and how lower interest rates are making Turkey’s rich richer. The article also highlights how such a policy choice is widening inequalities among the public threatening the president’s popularity even as the Turkish economy booms.

Bloomberg article points at how the President’s push for lower rates a bet on boosting growth to revive his flagging popularity ahead of 2023 elections and how it contrasts with other governments that aim to curb prices as the global economy recovers from the pandemic.

The article highlights the rate cuts serve the exporters to property tycoons, those already doing well as they are cashing in as borrowing costs drop and the lira weakens. Yet the side effects of lower rates and hence weaker TL is surging food inflation and skyrocketing rents are squeezing those at the bottom — Erdogan’s traditional base.

It recalls how credit-fueled growth the year before an election has worked for Erdogan in the past elections yet the accumulating impact of that policy over the years, plus the damage wrought by Covid, put the potential social costs to a bigger scale this time around.

Overall poverty reached its highest level in nearly a decade last year, with the Covid-19 pandemic pushing 1.6 million people below the World Bank’s threshold of $5.5 per person, per day, as wages failed to keep up with rising prices as the Bloomberg article adds.

According to the economists who spoke to Bloomberg, Erdogan’s push to boost growth and revive his appeal among voters ahead of the 2023 election are exacerbating the very imbalances that threaten to undo him at the ballot box.

The lira, which depreciated 20% against the dollar in 2020, is set for its ninth consecutive annual decline this year, Bloomberg reminds. Turkish Lira regained its title as the worst-performing emerging-market currency of 2021 after the central bank began a cycle of steep rate cuts in September as the consumer inflation keep accelerating to 20% as of October amidst surge in energy costs and a weaker lira.

The article continues by noting lower rates have worked wonders for manufacturers and exporters as the currency’s slide has sharply reduced labor costs at home and made Turkish products more competitive abroad, while cheaper borrowing has allowed companies to rapidly ramp up output since the pandemic. Turkey’s GDP growth is expected to reach 8.9% for 2021 beating many of its peers this year especially with help from exports that are projected to exceed $200 billion for the first time in nation’s history this year.

Bloomberg notes that such growth has come at the expense of workers, as income distribution becomes more unequal. Rising inequality is especially hitting younger people, with youth unemployment trending at above 20%, nearly double the headline figure.

Guldem Atabay, an economist at Istanbul-based Global Source Partners argues that “Credit-boom driven growth is problematic. It’s overheating the economy, fueling inflation and pressuring the currency and it fails to attract high-quality resources that are required to improve welfare. Hence she adds “Deterioration in income distribution and bad governance will have a political cost.”

In the article Bloomberg underlines that such a risk is familiar to Erdogan who began his career in the 1990s as mayor of Istanbul, building his base among working-class city-dwellers by developing infrastructure and extending social support.

Bloomberg ends the article by noting Erdogan’s Poll Rating Hits All-Time Low as Economic Woes Grow; yet his appeal has not ebbed totally as some 30% still do not see a better candidate than Erdogan to solve the economic troubles of the country.