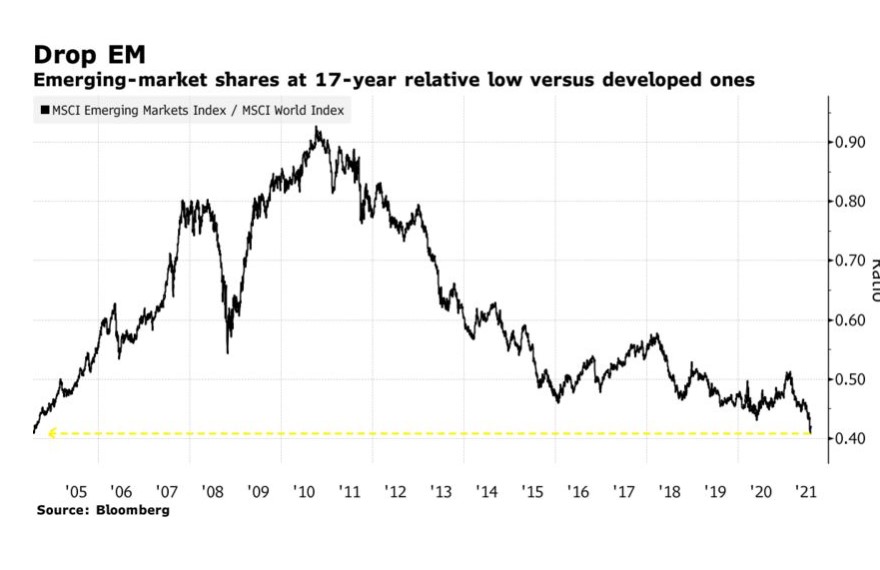 As financial capital flows into EM dry up, several leading financial intuitions express concern that Developing nations will be hard put to avoid “long Covid” or economics scarring. Rising Delta variant cases in Asia, a visible slow-down in Chinese economy and strong US data which may compel Fed to taper are external shocks which may exacerbate stagflationary pressures.

Some emerging markets face the risk of permanent economic damage from the coronavirus pandemic, the world’s largest asset manager BlackRock warned on Monday.

BlackRock’s Investment Institute economists said in a weekly note that whereas European growth was now catching up with the rate in the United States, emerging markets (EM) appeared to be limping towards stagnation.

They said it reflected challenges in many EMs where renewed COVID-19 outbreaks threaten lockdowns and more dire public health outcomes, while China’s potential economic slowdown could also have a widespread impact.

“Over the long term, we see a greater risk of permanent damages in some EMs due to slow vaccinations and more limited policy space,” said BlackRock, which recently downgraded its view on both EM equities and debt to “neutral.”

The Multilateral Leaders Task Force on COVID-19 Vaccines estimated at the end of last month that less than 20% of the vaccines needed to inoculate 40% of people in low and low-middle income countries was currently scheduled for delivery.

“Increased investor concerns about China and a widening vaccination gap will keep pressure on emerging-market assets relative to their developed peers, according to some market participants”, reports Bloomberg.

“We’ve been neutral on emerging markets for some time now driven largely by a mix of tight policy and waning momentum in China,” said Patrik Schowitz, global multi-asset strategist with JPMorgan Asset Management. “The latest Covid developments add to our caution and further cloud the overall outlook for emerging markets.”

IIF flow data partially confirms bears’ view that EM is heading for  stagflation and the valuation discounts to DM may be justified.

Reuters reported on August 3 that  “Investor sentiment was weighed down by a hawkish Federal Reserve and a regulatory crackdown in Beijing among other issues, the IIF said.